The geography and Lusophone studies major is one of 16 Beinecke Scholars this year. 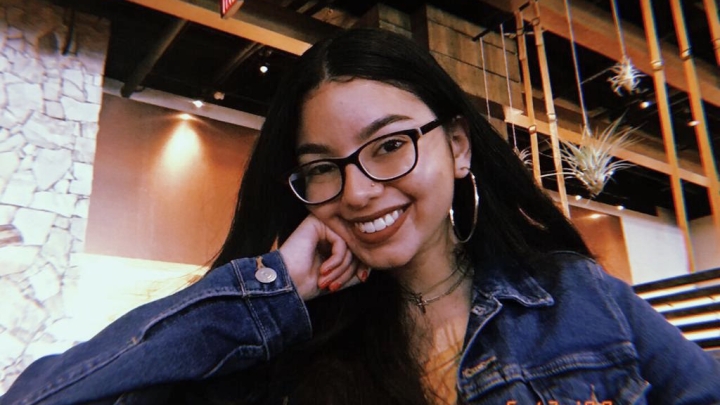 Mariana Peñaloza Morales ’22, a double major in geography and Lusophone studies from Miami, Fla., has been named a Beinecke Scholar—one of 16 college juniors nationally to receive this year’s award.

“Beinecke means I’ll have time to dedicate myself to my academic work. It guarantees some security for me and my family. That’s something I’m still trying to wrap my head around,” says Peñaloza Morales.

Having grown up in Miami as the child of immigrants from Colombia and Peru, Peñaloza Morales says, “All of my interests are grounded in my community—that’s not something I discovered in a book. All of it goes back to my identities as low-income, first-generation, and Latinx. I started organizing around Abolish ICE, and that introduced me to the ideas of racial capitalism. I saw people caring about other people’s lives, and they inspired me. They introduced me to thinkers like Frantz Fanon and Cedric Robinson—to all these amazing books and authors.”

As a first-year student, Peñaloza Morales took a geography class with Assistant Professor Patricia Lopez and was hooked.

“We talked about what BIPOC (Black, Indigenous, and people of color) and working-class people struggle with, not just in the United States, but across the globe,” Peñaloza Morales says. “A lot of professors might shy away from talking about those things, so it was exciting for me to see professors in the geography department actively talking about it.”

Lopez, along with Jorge Cuéllar, an assistant professor of Latin American, Latino, and Caribbean studies, is advising Peñaloza Morales on their thesis—a bilingual (English and Spanish) essay collection “that uses speculative fiction to theorize what constitutes the city as an imagined geography, to think about that as a category that is obsolete.”

Peñaloza Morales also fell in love with the Portuguese language and Lusophone studies, the study of the Portuguese-speaking world. “I have a really great relationship with the two Portuguese professors at Dartmouth, and I ended up taking all the classes,” Peñaloza Morales says. “For me as a Latin Americanist studying the global South, to have access to work written by people from the largest country in Latin America just makes sense.”

Peñaloza Morales is a fellow in the Mellon Mays Undergraduate Fellows program, which supports students from minoritized backgrounds in pursuing careers in academia.

“Mellon Mays is great. It’s nice to have a community of low-income people of color to just talk about ideas with—a cohort of people who have your back and are going through the struggles of trying to do research in a pandemic with you,” they say.

At Dartmouth, Peñaloza Morales has worked as an associate at Novack Café, supervisor at McLaughlin Snack Bar, Latinx and queer student coordinator in the Office of Pluralism and Leadership (OPAL), as a research assistant for several professors in various departments, and as a translator for Study and Struggle, a national project that organizes against incarceration and criminalization in Mississippi.

They are also a cofounder of the Dartmouth Student Union. “That’s been the activity within the last year that has taken most of my time—leading in mutual aid on campus, curating political education curricula, and just being there for each other,” Peñaloza Morales says. “It’s been a meaningful space to interact with people across campus, across identities, across class years, and think about what Dartmouth should be doing for its students. Working for OPAL is similar—just trying to create community for students who don’t necessarily feel like Dartmouth is a home.”