This year’s Neukom award honors two playwrights, one of whom is an alumna. 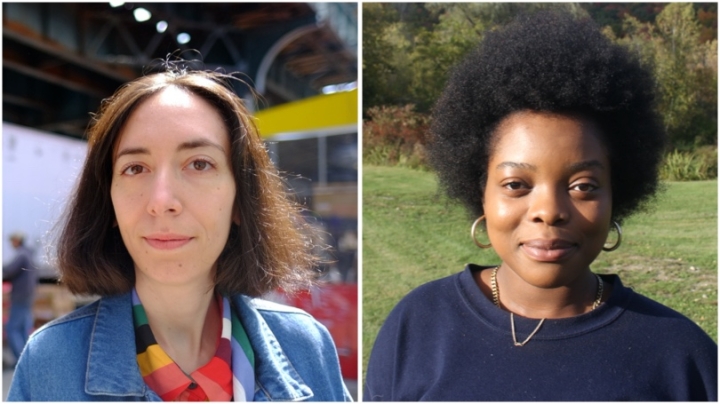 Gina Femia’s meet you at the Galaxy Diner. has won the 2021 Neukom Institute Literary Arts Award for Playwriting. Some of Us Exist in the Future, by Nkenna Akunna ’16, was named runner up.

“These are two terrific dramatic works that make us think about the emotional dimensions of the intersection of lives and the digital,” says Dan Rockmore, director of the Neukom Institute for Computational Science.

Femia’s play tells the story of old high school friends who reconnect by chance over a 1990s-era online messaging service, sparking a wave of memories and old emotions. The play explores technology, outer space, and whether looking back can help people remember who they are.

“Gina Femia’s work is remarkable—it’s thoughtful and hopeful, showing that our frenetic digital culture has space for nostalgia and meaningful connection,” says Rockmore.

Femia’s award includes a $5,000 cash prize and two weeklong workshops: one at Dartmouth’s VoxLab in July 2021 and another at Northern Stage, based in White River Junction, Vt., during the ’21-’22 season.

“Exploring humanity onstage is the heartbeat of most of my work, and to have an award that recognizes the importance of looking through it with a digital lens, particularly after 2020, is vital to that continual exploration,” says Femia. “I’m so full of gratitude for so many reasons, but most of all to be given an opportunity to develop this play that’s so close to my heart and soul, especially after this past year; it just means everything to me.”

Some of Us Exist in the Future follows a Black immigrant in Brooklyn through her daily effort to scrape by. She receives nightly calls from the gods on her television, prompting the question: “What does it mean to die to this world?”

“Nkenna Akunna has given us a lyrical and sharply funny piece that plays with the boundary between the real and the otherworldly that the digital makes possible, and the possibilities that it can create for reimagining the self,” Rockmore says.

“It is so lovely for my work to be honored in this way, not least because I wrote my first play at Dartmouth five years ago,” says Akunna. “I look forward to continuing to work on Some of Us in residency this summer in Hanover.”

Akunna is the first Dartmouth graduate to be honored in the Neukom program. The runner-up receives a $500 cash prize and a residency with VoxLab.

“We are overjoyed that the Neukom prize will be supporting two exceptional works that speak poignantly to the ways our modern, everyday lives are mediated by technology,” says Jess Chayes, the BOLD Associate Artistic Director at Northern Stage. “In the wake of this year of isolation, these two plays speak profoundly to both the Neukom prompt as well as our current cultural moment.”

The annual playwriting award considers plays and other full-length works for the theater that address the question, “What does it mean to be a human in a computerized world?” This year’s winner and runner-up come from a shortlist of 12 plays selected from over 140 submissions.

“We are delighted to see the explosion of interest in the Neukom award,” says Rockmore, creator of the award program. “It is so exciting to see the thoughtful creative work that is being sent in response to the call and gratifying to be able to support this work at the nexus of the arts, humanities, and computation.”

The Neukom playwriting award program is a partnership between the Neukom Institute, the Department of Theater at Dartmouth College, VoxLab, and Northern Stage based in White River Junction, Vermont.

If you talk to me a decade from now, I think most of the chatbots will be generative. And that’s because the experience is more human-like.