Dartmouth graduates served and sacrificed in all the nation’s wars. 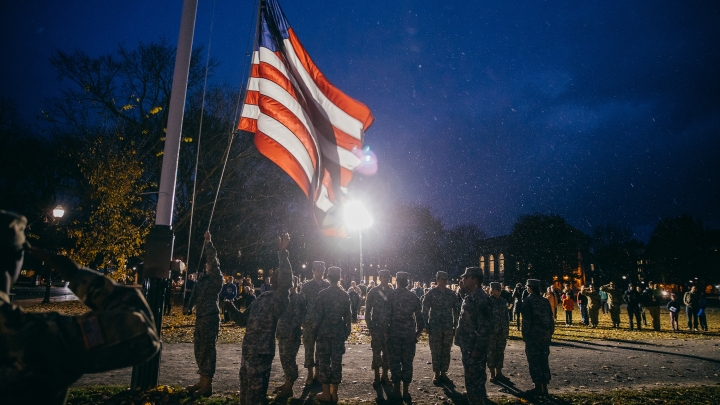 William Eaton, Class of 1790, was just 16 when he joined George Washington’s Continental Army in 1780. Following the Revolution, he worked to earn enough money to enroll in Dartmouth, from which he graduated in 1790. He accepted a commission in the new United States Army, and several years later was appointed the U.S. Consul at Tunis.

When the war with the Barbary pirates broke out, Eaton, now bearing a commission in the U.S. Navy, led a contingent of U.S. Marines and some mercenaries to Derne in Tripoli and secured that city. He was a hero, and the Marine Corps embraced the “shores of Tripoli” to celebrate in tale and hymn.

William Eaton stands as a symbol of Dartmouth’s long tradition of military service. Dartmouth’s Alden Partridge and Sylvanus Thayer, Class of 1807, were among the early superintendents of the new United States Military Academy at West Point. Thayer introduced major curricular and conduct changes, and is known as “the father of West Point.” Partridge later formed several military schools, including Norwich University.

Having played a role in the important creation legend of the Marine Corps and providing service in shaping the education of Army officers, during the Second World War Dartmouth had the largest V-12 program in the country, training on its Hanover campus future Navy—and Marine Corps—officers.

Dartmouth graduates served with honor. Eri Woodbury commanded a Vermont Cavalry Company in the Civil War and received the Congressional Medal of Honor following the battle at Cedar Creek in Virginia in 1864. Richard Hall died driving an ambulance for the American Field Service in France on Christmas morning in 1915. Milton “Stubbie” Pearson captained both football and basketball teams and was a Phi Beta Kappa graduate in 1942. He was killed when the Dauntless Dive Bomber he piloted was shot down in the Battle of Palau. Some 91% of his classmates served in World War II, and 33 of them—5% of the class that matriculated in 1938—died during the war. Duncan Sleigh of the Class of 1967 died in Vietnam when, during heavy enemy fire, he shielded with his body a wounded young Marine in his platoon. He was posthumously awarded the Navy Cross for his bravery.

During the 21st century wars in Afghanistan and Iraq, Dartmouth received national recognition for its pioneering role in welcoming veterans of those wars into its student body. And two Dartmouth graduates, Nathaniel Fick ’99 and Phil Klay ’06, who were commissioned as officers in the Marine Corps upon graduation, served in Iraq and Afghanistan and wrote two of the most critically acclaimed books about these wars—Fick’s nonfiction One Bullet Away and Klay’s fiction award winning Redeployment.

Stubbie Pearson was the valedictorian for the Class of 1942. At commencement in that first year of World War II, he told his classmates they needed to help end the war and then work to make the world a better place, “A tomorrow with a ray of sunshine more bright than we have ever seen before....”

Let us honor all of those who sacrificed in that quest.

In 2019, a Dartmouth alumnus and his wife, Barry Elson ’63 and Karen Elson, donated a brick to the Peachtree Corners Veterans Monument in Peachtree Corners, Ga., in honor of Dartmouth’s veterans. Earlier this year, the director of the monument committee wrote to President Emeritus James Wright, asking about the history of Dartmouth’s veterans, and in response, Wright wrote this essay.

Written by
James Wright, Dartmouth president emeritus
Share this
FacebookTwitterEmailCopy a link to this article
Articles