Matt Haughey ’21 says the success of his latest release took him by surprise. 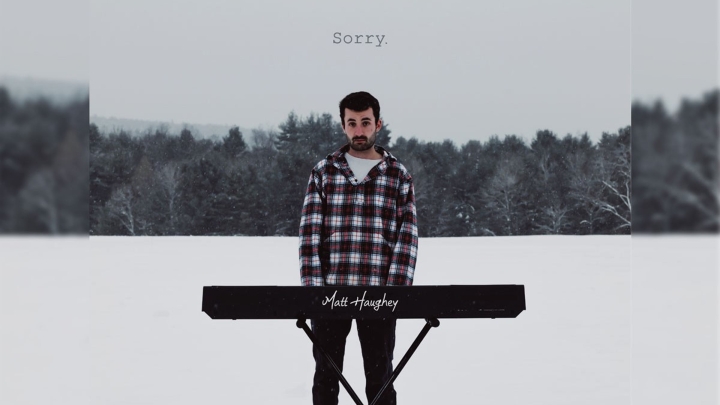 When Matt Haughey ’21 posted his first original song on social media in the fall of 2019, he thought 1,000 listeners would be a lot. But after quickly gaining fans, this year the economics and theater major set a goal of reaching a million streams on his songs on Spotify. It didn’t take long, thanks mostly to his latest tune, Sorry, which was streamed 700,000 times on various platforms in just two months.

“That song has done way better than I anticipated,” says Haughey, who figures he hit a nerve by describing a near-universal experience: “having strong feelings for someone who doesn’t quite feel the same way you do.”

It’s not the first time people have taken notice of Haughey’s work—some of his songs have been picked up by SiriusXM Radio. But Sorry has made its own sort of splash, prompting interviews with news outlets—including the record label Planet LA Records­—and a message or two every day on Instagram, mostly from fans in Europe and Asia.

“It’s really cool to be able to connect with this many people,” says Haughey, who answers each message. And he’s amazed when fans are surprised to hear from him.

Haughey, who’s from Madison, N.J., grew up singing around the piano with his brothers. He wrote his first song in high school and has continued making music at Dartmouth, singing a capella and performing in theater productions. He’s also collaborated with fellow Dartmouth community members on his songs, which are usually autobiographical.

Most recently, he worked with Josh Cherner ’21, who shot the cover photo for Sorry, and Henry Phipps ’21, an engineering and computer science major who has produced most of Haughey’s songs during the past few years.

Phipps says he loves the raw emotion in Haughey’s music.

“When I hear his vocals for the first time, that sparks feelings,” says Phipps, who tends to get right to work when Haughey sends him a song. “Usually, I get it and immediately feel like I have to capture my initial reaction.”

For Sorry, Phipps started with Haughey’s vocals. Then, he layered in all sorts of sounds, including himself playing piano, samples from studio musicians, and the sound of rain, recorded by “some dude with a mic in his back yard,” he says.

That’s how their collaborations usually go, Phipps says. “We smoosh it all together and really carefully pick our pieces, and you end up with this really cohesive sounding thing, and I think that’s magic.”

Haughey has also worked with Sangwook “Sunny” Nam, a senior lecturer in music and Grammy-nominated mastering engineer, who mastered two of his earlier tunes.

“It’s great to hear that Matt’s new song gained popularity over the net,” says Nam, who is also technical director of Bregman Media Labs and owns a mastering studio in West Lebanon, N.H.

Nam, who doesn’t charge Dartmouth students for his services, says that “under an atmosphere where the endeavor that doesn’t guarantee a good ROI isn’t welcomed,” students who take time to pursue their passion for music are a “rare breed,” who he feels inclined to support as much he can.

He’s proud that a lot of Dartmouth students’ music has been noted by a broader audience over the years, Nam says. And based on what he’s been working on for other students, he “can confidently say that more students would join Matt’s success.”

As Haughey finishes his senior year—and his senior thesis, an original musical being produced online, with Haughey as music director—he’s also looking ahead. He’ll be heading to New York City, where he hopes to play out, release his own music, and write songs for other artists.

His upcoming release, due out in the next several weeks, is called “The Kid That You Loved.”