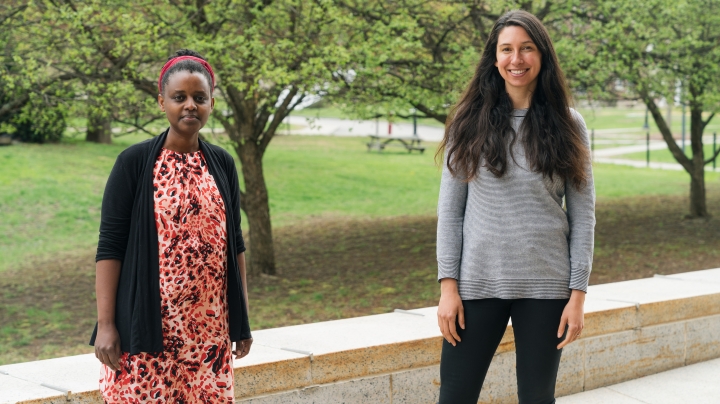 Glorieuse Uwizeye (left), a Rwandan genocide survivor and anthropology postdoctoral fellow of the Society of Fellows, and Zaneta Thayer, an assistant professor of anthropology, are co-authors on the paper. (Photo by Eli Burakian ’00)
5/13/2021
Body

The study was led by Glorieuse Uwizeye, a Rwandan genocide survivor and anthropology postdoctoral fellow of the Society of Fellows. As a mental health nurse in 2010, she started working with survivors of the genocide against the Tutsi, including women who were raped.

“I was finding that these women’s children who were born by genocidal rape, were kind of forgotten by everybody, including by policymakers and researchers,” says Uwizeye. “For these women, having children of perpetrators was an additional burden and this was a topic that was drawing little attention.”

She says, “It was then that I decided to shift my focus to working with Rwandan children who were conceived by genocidal rape. By studying their mental and physical health outcomes, I wanted to be able to write about their experience and be able to speak on their behalf with the hope that my research leads to the design of interventions that could mitigate these health effects of exposure in early life.”

In March and April 2019, Uwizeye collected data from a total of 91 Rwandan men and women, who were 24-years old. There were three groups: 30 conceived by genocidal rape, 31 born of genocide survivors not raped, and 30 born of women with neither exposure who left Rwanda before the genocide and returned afterwards (i.e. a control group). The participants were recruited from communities and organizations, including Solidarity for the Development of Windows and Orphans to Promote Self-Sufficiency and Livelihoods (SEVOTA) and the Association of Genocide Widows Agahozo (AVEGA).

In Kinyarwanda, an official language of Rwanda, participants were asked a series of questions regarding their mental and physical health status. The data collected included information about post-traumatic stress syndrome (PTSD), anxiety, depression, overall mental function, overall physical function, pain level, and interference with daily physical function. Demographic and socioeconomic information was also obtained, and prenatal exposure to genocide or genocidal rape or neither condition was noted. Data was also collected on adverse childhood experiences, including emotional, physical and sexual abuse; living in a household with violence and/or substance abusers; and exposure to community violence and resilience.

The findings demonstrate that participants conceived during the genocide had higher scores related to depression, PTSD, pain intensity, and poorer mental health and physical function, than those not prenatally exposed to the genocide. Those who were born as a result of genocidal rape had poorer mental and physical health outcomes, including higher levels of depression, PTSD, and pain intensity and interference with daily function, than those who were exposed solely to the maternal stress of genocide. Both groups had more exposure to adverse childhood experiences than the control group.

Co-author Zaneta Thayer, an assistant professor of anthropology, says “In the past, most research has just looked at prenatal environments in relation to adult health but has not considered this postnatal period.

”This research is important because it suggests that intervention at any point, even postnatally, can help reduce poor health following adverse prenatal exposures,“ adds Thayer.

The research was part of Uwizeye’s dissertation at the College of Nursing at the University of Illinois Chicago.

”Glorieuse Uwizeye’s work is essential to understanding the transgenerational impact of the genocide against the Tutsi and has major implications for ongoing sociopolitical violence around the world. It is not only the immediate survivors who are affected, but their children and even beyond,“ says senior author Julienne N. Rutherford, biological anthropologist and associate professor of Human Development Nursing Science at the College of Nursing at the University of Illinois Chicago, who served as Uwizeye’s Ph.D. advisor.

”Glorieuse Uwizeye, Zaneta Thayer and I plan to continue building on this research by working with these young adults as they age and start families of their own, to better understand how their early life experiences affect future generations,“ Rutherford says.

Uwizeye and Thayer are currently studying ways to share their results with the participants in Rwanda.

Thayer says, ”As researchers, we have an ethical responsibility to communicate our findings back to the community, and we want to do that in a way that is thoughtful, informative and hopeful, not negative or pathologizing. We’re looking forward to developing methods for dissemination and to working with community members and organizations on the ground to address these important health impacts.“