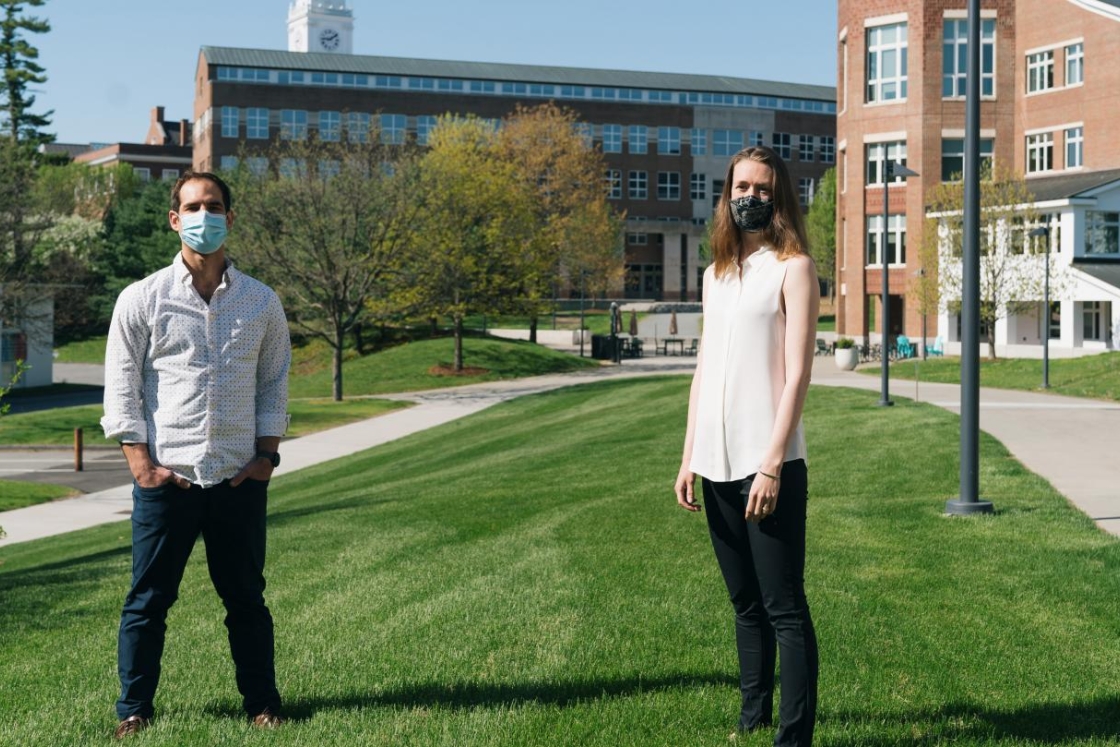 Adam Steel, a Neukom Fellow with the Department of Psychological and Brain Sciences in the Robertson Lab, and Caroline Robertson, an assistant professor of psychological and brain sciences, are co-authors on the paper. (Photo by Eli Burakian ’00)
5/18/2021
Body

As we move through the world, what we see is seamlessly integrated with our memory of the broader spatial environment. How does the brain accomplish this feat? A new study from Dartmouth reveals that three regions of the brain in the posterior cerebral cortex, which the researchers call “place-memory areas,” form a link between the brain’s perceptual and memory systems. The findings are published in Nature Communications.

“As we navigate our surroundings, information enters the visual cortex and somehow ends up as knowledge of where we are—the question is where this transformation into spatial knowledge occurs. We think that the place-memory areas might be where this happens,” says lead author Adam Steel, a Neukom Fellow with the Department of Psychological and Brain Sciences in the Robertson Lab. “When you look at the location of the brain areas that process visual scenes and those that process spatial memories, these place-memory areas literally form a bridge between the two systems. Each of the brain areas involved in visual processing is paired with a place-memory counterpart.”

For the study, an innovative methodology was employed. Participants were asked to perceive and recall places that they had been to in the real world during functional magnetic resonance imaging (fMRI), which produced high-resolution, subject-specific maps of brain activity. Past studies on scene perception and memory have often used stimuli that participants knew of but had never visited, like famous landmarks, and have pooled data across many subjects. By mapping the brain activity of individual participants using real-world places that they had been to, researchers were able to untangle the brain’s fine-grained organization.

In one experiment, 14 participants provided a list of people that they knew personally and places that they had actually visited, such as their father or their childhood home. Then, while in the fMRI scanner, the participants imagined that they were seeing those people or visiting those places. Comparing the brain activity between people and places revealed the place-memory areas. Importantly, when the researchers compared these newly identified regions to the brain areas that process visual scenes, the new regions were overlapping but distinct.

“We were surprised, because the classic understanding is that the brain areas that perceive should be the same areas that are engaged during memory recall,” says Steel.

“Our findings help explain how a generic image of a clock tower becomes one that we recognize, such as Baker-Berry Library’s tower here on Dartmouth’s campus,” says Steel. 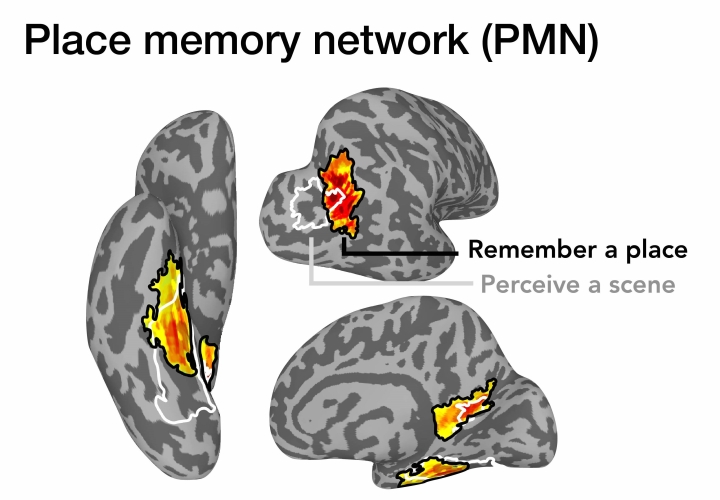 The place-memory network of the human brain, compared with the brain areas that process visual scenes (shown in white). (Figure by Adam Steel et al.)

“It’s thrilling to discover a new set of brain areas,” says senior author Caroline Robertson, an assistant professor of psychological and brain sciences. “Learning how the mind is organized is at the heart of the quest of understanding what makes us human.”

The research team is currently using virtual reality technology to explore how representations in the place-memory areas evolve as people become more familiar with new environments.

In addition to Steel and Robertson, Madeleine Billings ’20 and Edward Silson at the University of Edinburgh served as co-authors of the study.