Four Dartmouth women from classes spanning a decade are on the U.S. Team together. 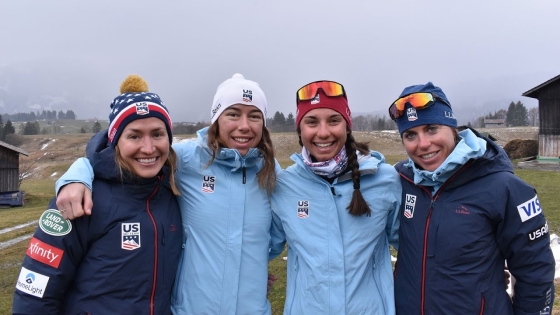 It was a remarkable World Cup season for U.S. Cross Country Ski Team members from left, Sophie Caldwell Hamilton ’12, Katharine Ogden ’21, Julia Kern ’19, and Rosie Brennan ’11 for their competitive performances and for the special bond formed between the Dartmouth women who are on both ends of their professional skiing careers.

Ogden and Kern, who are graduating in June, say that the mentorship of their older teammates helped them thrive as skiers during an international racing schedule that begins in November and runs through March, and as Dartmouth students committed to balancing academics and athletics.

As the season ends, Ogden, Kern, and 2018 Olympian Brennan, are looking toward the 2022 Winter Olympics in Beijing. Caldwell Hamilton, a two-time Olympian and winner of two World Cups, plans to retire from professional skiing after a remarkable eight-year career.

Says Caldwell Hamilton, “All three of those girls are incredibly special to me and I know they will be forever. And I think our bond through skiing, our bond through our Dartmouth connection, it’s something special and I’m grateful for them all.”

Robert Gill can be reached at Robert.Gill@dartmouth.edu.