Burkins Named Director of the Institute of Arctic Studies 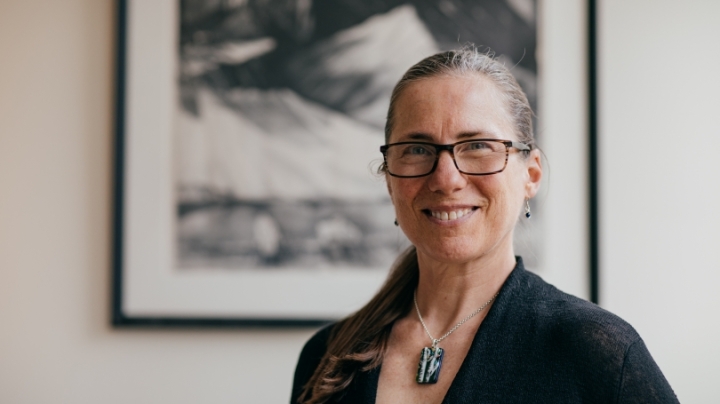 Melody Brown Burkins, Guarini ’95, ’98, the associate director for programs and research at the John Sloan Dickey Center for International Understanding, has been named director of the Institute of Arctic Studies.

Burkins begins her new role on July 1, as Ross Virginia, the Myers Family Professor of Environmental Studies, passes the helm of the internationally renowned program to his longtime student, colleague, and friend.

Virginia, who plans to continue teaching and serving in leadership roles in polar science and diplomacy organizations, including the University of Greenland, University of the Arctic (UArctic), and the U.S. National Academies of Polar Research, says Burkins has “a broad palette of skills” that will serve her well as head of the institute.

“I couldn’t think of anyone better suited to position Arctic programs to take on the next era of leadership,” says Virginia.

“Melody Brown Burkins has an impressive record of achievement in a broad range of areas, including Arctic fieldwork, publishing and teaching in environmental studies and Arctic science, and sustainable community development, as well as experience with national public policy development and international diplomacy,” Smith says.

“As the Dickey Center begins a new chapter with incoming director Victoria K. Holt, we are delighted to have a leader as extraordinary as Melody in place at the Institute of Arctic Studies,” Smith says.

Since its founding in 1989 as part of the Dickey Center, the Institute of Arctic Studies has focused on the environmental, cultural, and political dimensions of the North and the critical impact of climate change. The institute offers undergraduate and graduate students opportunities to work with internationally recognized scholars in the classroom, on research, and on polar fieldwork. It also organizes seminars and public events and supports early-stage scholars.

Burkins grew up in Fairbanks, Alaska, and earned her bachelor’s degree in geology from Yale. She earned a master’s in earth sciences and a PhD in earth sciences and earth, ecosystems, ecological sciences from Dartmouth, where Virginia was one of her advisers and recruited her into polar research and fieldwork in Antarctica.

She has also worked in public policy and science as an environment, energy, and natural resources policy adviser to U.S. Sen. Patrick Leahy of Vermont, chairs the Board on International Scientific Organizations at the U.S. National Academies, and is an elected Governing Board member for the International Science Council. This spring, she was nominated by Dickey Interim Director Christianne Hardy and Virginia to serve as a first UArctic Chair in science diplomacy and inclusion.

Burkins says the motivating force in all her work, whether it involves scholarship, teaching, public policy, or science diplomacy, is a commitment to furthering the principles of cooperation, peace, and sustainability.

“That’s how you do meaningful work,” she says.

This translates into doing research in collaboration with the diverse peoples of the polar regions and beyond, she says. “In the Arctic and around the world, this work to develop more collaborative, equitable, and inclusive scholarship informing a more sustainable future for our planet is critical. For our students and our children, we must continue to try.”

Burkins says she is looking forward to working with incoming Dickey director Holt as she builds her team at the center and continues to develop programs to bring undergraduates, early-stage researchers, renowned scholars, and allied organizations together with Dartmouth at the forefront of polar science and policy.