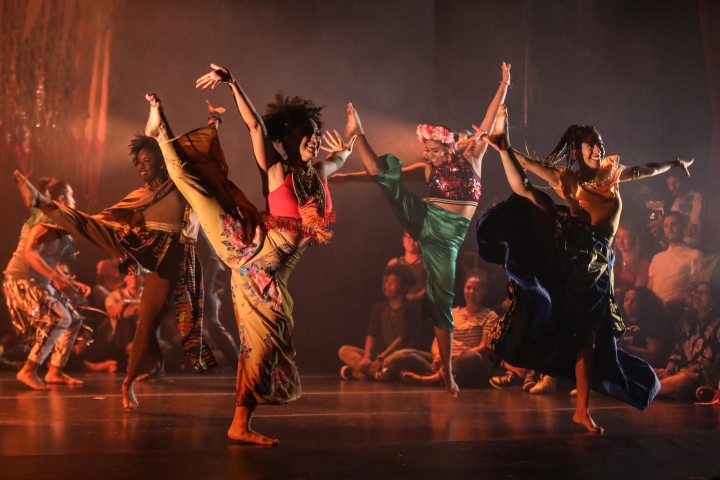 The Los Angeles-based dance company CONTRA-TIEMPO will perform in July on an outdoor stage at the BEMA. (Image courtesy of the Hopkins Center for the Arts)
6/10/2021
More Reading

The Hopkins Center to Partner with Dance Theatre of Harlem

The Hopkins Center for the Arts has announced its upcoming summer 2021 season, which will include a dynamic range of experiences, performances, and presentations by such acclaimed companies and groups as Pilobolus, CONTRA-TIEMPO, and Dance Theatre of Harlem.

The season will also include workshops featuring inspiring leaders, thinkers, and creators from across a robust spectrum of disciplines. Following several virtual seasons necessitated by the pandemic, the Hop’s summer season will welcome visitors back for in-person events, presented in and out of doors at the Hop and on campus. To invite an even greater number of people to reconnect with the arts live this summer, the Hop is also collaborating with regional cultural partners to stage additional events, allowing for greater access. A roster of currently confirmed programs, including dates, times, and locations, is available on the Hop’s website. Ticket information is also available on the website.

This season will mark the launch of an innovative and ongoing interdisciplinary series at the Hop that will pair dance artists with professors, scholars, and students working in seemingly disparate areas of study such as astronomy and ecology. The pairings in the series, titled Big Move, will result in workshops that feature performances and engage audiences in participatory actions that explore unexpected connections and reveal new ways of thinking and creating.

This summer season is not only a re-opening; it’s a celebration.

Attribution
Mary Lou Aleskie, the Howard L. Gilman ’44 Director of the Hopkins Center for the Arts

Among the renowned individuals slated for Big Move events this summer are dancer and choreographer Emily Coates with Dartmouth’s Elisabeth Newton, an assistant professor of physics and astronomy, and French-Cambodian dancer Manou Phuon and American terrestrial ecologist and author Tom Wessels. These events follow an early Big Move presentation in May that featured Alice Sheppard, a choreographer, thinker, and leader within the field of Disability Arts, and Eugene Korsunskiy, a specialist in design thinking and hands-on learning, that examined intersectional disability as an aesthetic, a culture, and a catalyst in the creative process.

Big Move extends the Hop’s commitment to interdisciplinary collaboration as a cornerstone of its programmatic vision. 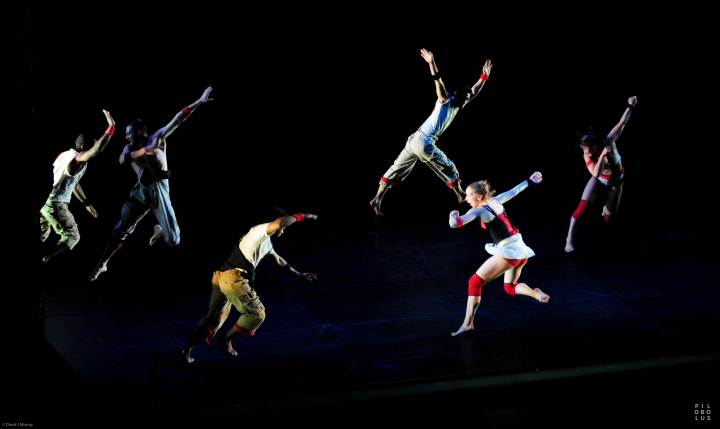 This summer, Pilobolus returns to the Hop for six performances. (Photo by D. Murray)

The Hop’s summer season also features an exciting homecoming for the pioneering American modern dance company Pilobolus. The company, which has created and toured over 120 pieces of repertory to more than 65 countries and is recognized for its groundbreaking approach to movement and collaboration, was founded at Dartmouth in 1971 by then students Moses Pendleton, Jonathan Wolken, and Steve Johnson when they were enrolled in a dance composition class taught by Alison Becker Chase.

This summer, as Pilobolus celebrates its 50th anniversary, the company returns to the Hop once more for six performances each featuring four vintage favorites from across their extensive repertoire, presented outdoors against the verdant backdrop offered by Dartmouth’s BEMA amphitheater. Pilobolus will also participate in a Big Move workshop that honors and extends its founders interdisciplinary roots and the significance of that boundary-pushing approach to their own dance and choreography.

“This summer season is not only a re-opening; it’s a celebration. It reunites us with each other and with the spirit and power of the arts through live and participatory events. It is a moment to immerse ourselves in the joy and connection that dance, music, theater, and creativity in all its forms provides us,” says Mary Lou Aleskie, the Howard L. Gilman ’44 Director of the Hopkins Center for the Arts.

“This summer season also epitomizes the Hop’s vision and approach to its program by offering compelling performances as well as experiences that invite audiences into our featured artists’ creative processes, especially those who are in residence at the Hop such as Dance Theatre of Harlem and dancer and choreographer Emily Coates, among so many others,” Aleskie says. “We are, as always, excited to invite our audiences into the artistic journeys that are taking place here at the Hop, and look forward to sharing these amazing talents with new and returning visitors.”

A roster of forthcoming summer events, as well as additional details that will continue to be added, are available on the Hop’s website.