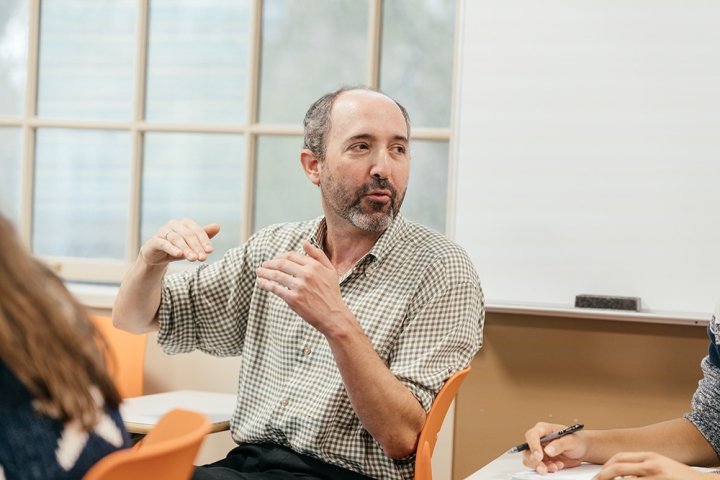 Professor Michael Herron talks with students during a class in the quantitative social sciences program in 2017. (Photo by Eli Burakian ’00)
6/21/2021
Body

Michael Herron, the Remsen 1943 Professor of Government, appeared June 11 at a U.S. House hearing on voting rights, testifying that limits on early voting, restrictions on absentee ballots, and changes in polling locations impose a greater burden on black and minority voters’ participation in elections than on non-minority voters.

“We know that these features of election administration—lines, polling places closing and so forth—disproportionately affect minority voters,” Herron told the committee at the remote hearing, citing a large body of political science research including his own, “And that means that these individuals … disproportionately have higher costs of voting than non-minority voters. That shows that these election administration practices have consequences for equal treatment of voters, and particularly for different racial and ethnic groups in the country.”

The prohibition of voting practices that discriminate on the basis of race, color, or minority status is a key feature of the Voting Rights Act of 1965, which the John Lewis Voting Rights bill seeks to strengthen and reauthorize, subcommittee chair Rep. G.K. Butterfield (D-N.C.), a former voting rights attorney and close friend and colleague of Rep. John Lewis, said during the hearing.

Lewis, a civil rights leader and longtime U.S. representative from Georgia, died of pancreatic cancer in 2020. The new voting rights bill that Lewis had worked on was renamed in his honor after his death.

After more than two hours of testimony, Butterfield took his five minutes at the close of the hearing to recall two witnesses—Herron and Danielle Lang, a voting rights litigator for the Campaign Legal Center. He started by asking Herron to summarize what his research shows about minority use of early voting.

Based on administrative voting data cited in his research, Herron said, “What we can see is that, and this is found by other entrants in the literature as well, minority voters are disproportionately heavy users of early voting.” This is particularly evident for weekends and Sundays, often associated with Black churches’ “souls to the polls” efforts, he said.

Butterfield then turned to Lang to ask to what extent she had, in her voting rights litigation practice, seen jurisdictions restrict alternative options for voting such as early voting or absentee voting in a discriminatory way.

“Unfortunately, we’re seeing it more and more. This is an area where again, as Professor Herron explained, because voters of color are effectively using some of these mechanisms for voting—early voting and vote by mail—there have been increasing attempts to restrict access,” Lang said.

The John Lewis Voting Rights act would strengthen the federal statute regarding the prohibition on discriminatory election practices, known as Section 2, and reinstate certain federal preclearance regulations of voting law changes, known as Section 5, which was struck down by the Supreme Court in 2013 in Shelby County v. Holder, Butterfield said.

Speaking after the hearing, Herron said he emphasized in his opening statement that his work is based on election administrative data and is nonpartisan. “My role in this hearing was to explain, what do we know? How this will go forward politically is anybody’s guess,” Herron said.