As the pandemic forced them to work remotely, Rocky’s PRS students adapted and thrived. 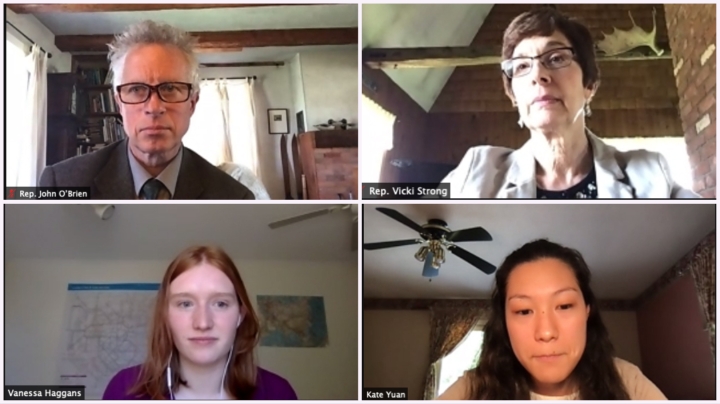 Clockwise from top left, Rep. John O’Brien and Rep. Vicki Strong of the Vermont House Committee on Agriculture and Forestry ask questions of Kate Yuan ’23 and Vanessa Haggans ’23 after the Policy Research Shop students testified about their research on the regional food supply system at a hearing on May 6.
6/02/2021
Body

Students in the Class of 1964 Policy Research Shop notched a first in the program’s 16 years of working with legislative policymakers by presenting testimony on a total of four different policy papers before house committees in two states—New Hampshire and Vermont— on the same day.

“All testimonies were remote via Zoom,” says Professor Ronald Shaiko, senior fellow and associate director of curricular programs at the Nelson A. Rockefeller Center for Public Policy, which runs the PRS. “While, in the past we have had two groups testify on the same day in the same chamber, we have never had four testimonies in two states on the same day.”

During a morning hearing on May 6, one student team presented research on the effects of neonicotinoids and pesticides and another team presented research on solid waste management policy before the New Hampshire House Committee on Agriculture and Forestry. Later that afternoon, a third group of students presented on the regional food supply system and a fourth team testified on their research into regenerative agriculture and payments for ecosystem services before the Vermont House Committee on Agriculture and Forestry.

Because of the pandemic, the bulk of the classwork, group collaborations, research, and testimonies before lawmakers were done remotely. Vanessa Haggans ’23 and Kate Yuan ’23, who presented their research on regional food supply system to the Vermont House committee, have not met in person, but developed a strong collaborative relationship, Haggans says. They both say strong support from the Rockefeller Center and Shaiko made this year’s PRS experience a highlight of their academic year.

“This was honestly one of the most successful projects I’ve been in, in terms of being remote,” says Haggans, a member of the School House community who is interested in a career in public policy work.

And after a year of working and attending classes remotely, testifying via Zoom seemed almost normal, she says. “It honestly made it easier to feel like I was interacting directly with each of the representatives—to see their faces and their immediate reactions, as opposed to being in a big, open committee room,” Haggans says.

In some ways, having to work remotely made conversations with the people involved in regional food systems easier, says Yuan, a member of the South House community who has decided to sign on as a student adviser with the Rockefeller Center’s First-Year Fellows program beginning this summer.

“We spoke to farmers and growers and institutions that do farm-to-school programs located all across the state of Vermont, so the fact that we were able to just hop on a Zoom call rather than driving an hour down to Putney or Bennington to talk to people made it really accessible for us—not to mention the people we talked to from Iowa.”

Shaiko says compiling the policy briefs—which present relevant legislative history, case law, social science research and other data on all sides of an issue without making any recommendations—helps undergraduates apply classroom learning to the real world of policymaking and legislation. The remote component added another dimension.

“The students adapted quite well. It showed how resilient they are, and I don’t think we missed a beat. The quality of the papers overall this year were at the same or even better level that we’ve had in the past,” Shaiko says.

Since its inception in 2005, well over 500 Dartmouth undergraduates have participated in the Class of 1964 Policy Research Shop; these students have produced more than 230 policy briefs for the Vermont and New Hampshire legislatures as well as statewide, regional, and local commissions.