‘Undaunted by Challenge,’ Graduates Are Urged to Find Hope

The world needs “your spirit and enthusiasm,” Annette Gordon-Reed ’81 told the graduates. 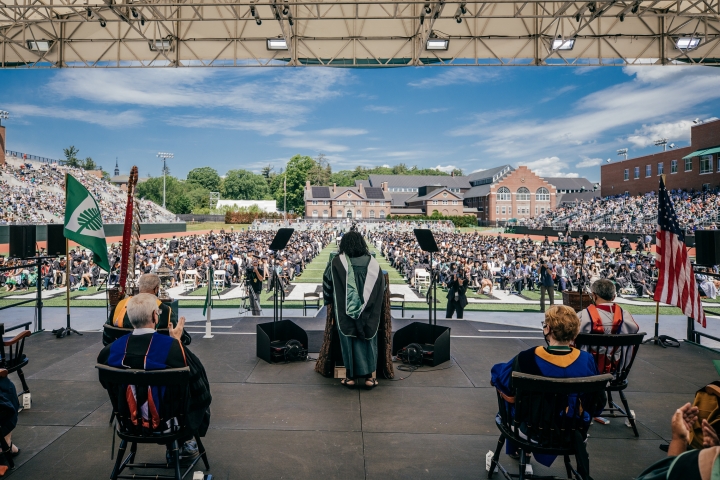 Video: Setting the Stage for Commencement 2016

All graduations are happy occasions, but this year’s commencement was an especially joyous time for students, parents, and friends who had overcome many challenges and, at long last, were able to come together on a bright, sunny day to celebrate remarkable accomplishments. To allow for social distancing, degrees were awarded on Memorial Field rather than on the Green, with graduates allowed two guests each. But in many other respects, this year’s celebration followed time-honored traditions.

With more than 2,000 guests in the field’s stands, and another 1,000 watching online, President Philip J. Hanlon ’77 conferred 2,005 bachelor’s, master’s, and doctoral degrees to graduates of undergraduate, graduate and professional programs from the Geisel School of Medicine, Guarini School of Graduate and Advanced Studies, Thayer School of Engineering, and the Tuck School of Business.

The Majestic Brass Quintet set an upbeat mood as faculty, administration, and guests processed to the platform and four representatives of the Class of 1971, marking their 50th anniversary, took their seats on the field. Led by Senior Class Marshall Jared Cape ’21, the graduating seniors walked around the track to the tunes of bagpiper Joshua Marks ’96. 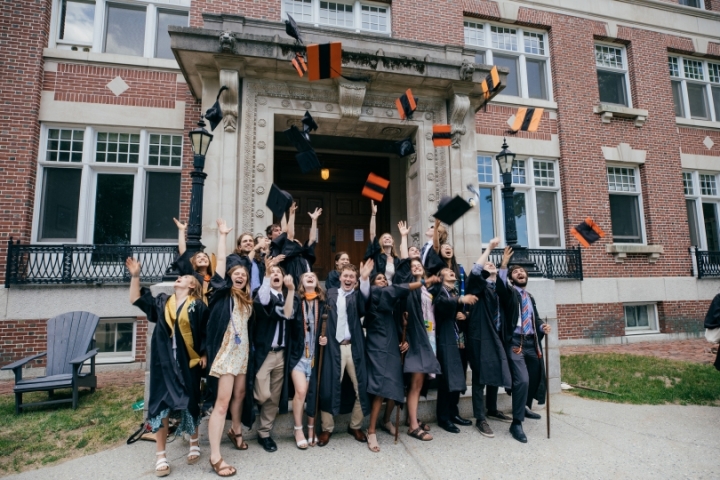 “Good morning, how wonderful it is to see all of you and be with all of you in person this morning,” said a smiling Provost Joseph Helble. “On behalf of the board of trustees, give yourselves a round of applause.”

Alayah Johnson Jennings ’21 and Steven Jump ’21, co-presidents of Native Americans at Dartmouth, spoke briefly about the founding of Dartmouth as an institution to educate Native Americans, and the rededication to that mission in 1970 by John Kemeny, the 13th president of the College.

“It is a wide diversity of Indigenous knowledge and backgrounds that truly makes Dartmouth valuable,” said Jump.

Rabbi Daveen Litwin, the dean and chaplain of the William Jewett Tucker Center, offered a nondenominational blessing, urging graduates to apply in the future everything they’ve learned this year about strength and compassion.

“May they vigorously and passionately seek to build a better world, committed to integrity, equality, compassion, justice, and peace, and may their lives be a blessing to all,” she said.

Now it is time to ‘greet the world from the hills with a hail’—a world that badly needs your spirit and enthusiasm is waiting for you.

Let the love of learning guide your life.

In her commencement address, Gordon-Reed recalled her first days at Dartmouth. Coming from Texas, she had no idea what a down jacket was.

“I remember vividly the very first image that popped into my head—a coat made of feathers—but with the feathers on the outside. How strange, I thought. That can’t be right,” she said.

But she braved the cold, and still treasures the friendships she forged as a student.

“Dartmouth students were not afraid to be seen as enthusiastic or passionate about things. It would have been easy to take one’s place in the much-vaunted Ivy League as an excuse to be jaded—to affect an air of nonchalance—as if everything were old hat and there was little about which to get excited. But that was not the way my schoolmates went through the world,” she said.

What she appreciated most, Gordon-Reed said, “was the validation of an enthusiasm that often gives birth to passion, because passion is absolutely required to do anything with excellence—whether it is writing a book, making a movie, raising children, or maintaining friendships.”

Gordon-Reed said she could not have predicted that a subject she’d been thinking about “informally but enthusiastically since the third grade—Monticello, Jefferson, and slavery—would come to define my adult life and career.” But every job she has held, she said, prepared her to write her first book and launch her career.

To the graduates, she said, quoting the Alma Mater, “Now it is time to ‘Greet the world, from the hills, with a hail!’—a world that badly needs your spirit and enthusiasm is waiting for you.”

A committee representing the dean of the Faculty of Arts and Sciences and the dean of the College chose Amanda Chen ’21, one of six valedictorians, to deliver the valedictory to the College. A mental health advocate, Chen spoke about the power of meaningful conversation to support and inspire friends and colleagues during trying times.

“To me, that’s what community means—having small moments throughout the day where we’re just looking out for each other,” she said. “In the real world, we won’t be able to bump into each other in Blobby or Novack or Collis anymore—we won’t have these small moments built into our days. We will have to actively bring this aspect of community with us.”

Chen said the pandemic has shown that “there are far too many problems in the world, and far too few solutions. I am thankful, however, in knowing that my peers are talented, smart, and passionate. If we want change to happen, in whatever field, now is the time to do it.”

In his valedictory address to the graduates, Hanlon acknowledged that the Class of 2021 had faced unprecedented challenges during their college years.

“The painful reckoning of the #MeToo movement. Racial injustice ravaging communities across the country. Divisive politics and an unprecedented attack on our democracy as the peaceful transition of power in this country was marred in violence earlier this year.”

As society was reeling, a pandemic was raging, “the likes of which we have not seen in our lifetimes. In an instant, you were faced with some stark and startling realities.” But, Hanlon said, adversity teaches us “that the things most precious to us are often the most fragile, and that they need nurturing and protection and stewardship,” and he told the graduates that their Dartmouth experience had uniquely prepared them to “become stewards of those things you hold most dear.”

And one of those things, of course, is the Green, the heart of campus, which is where many graduates and their families finished the balmy afternoon, mingling, taking photos, and enjoying each other’s company in ways that have, until now, been off limits.