The drive for an Olympic medal ended for Ariana Ramsey ’22 and the U.S. women’s rugby 7s early Friday with a 21-12 victory for Great Britain in the quarterfinal match at Tokyo Stadium.

Team USA will play in the match for fifth place against China Friday evening. Britain goes on to face France, and New Zealand plays Fiji in the semifinals Friday night. The winners will advance to the gold-medal game and the losers to the bronze-medal game, to be played early Saturday morning local time.

But Team USA notched a come-from-behind 14-12 victory over Australia in the final game of pool play late Thursday night. The two teams were both 2-0 when they met up for the final match of the round, and Australia led 7-0 at the half, but the U.S. team scored on two tries and made two conversions in late play to win. Ramsey was not in the lineup for the match.

Ramsey was a substitute in the quarterfinal loss to Britain, which saw the U.S. again shut out at the half, 0-14. A late surge by the U.S. women was not enough to overcome Britain, and the final score was 12-21.

Dartmouth Women’s Rugby cheered Ramsey’s Olympic showing, including a try against Japan in pool play. USA Rugby tweeted out “More to come” for Team USA, along with a link to the fifth-place semifinal game against China on Friday night at 9:30 EDT. 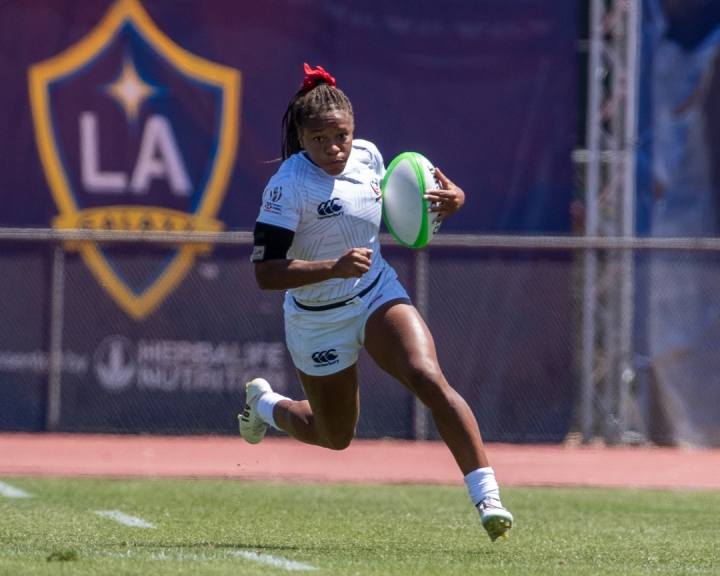 Ariana Ramsey ’22 and U.S. women’s rugby 7s are 2-0 in pool play and face undefeated Australia Thursday night in the final game of the round.

Ramsey scored her first Olympic try in the 17-7 win over host team Japan, which was played in the early morning hours Thursday, Eastern Daylight Time. Ramsey did not play in the first-round match against China, but Team USA defeated China 28-14.

The results from the U.S.-Australia match will determine seeding in the quarter-finals. The medals finals for the teams with the best records in the semifinals will be played in the early morning hours (EDT) on Sunday, Aug. 1.

Madison Hughes ’15 and the U.S. men’s rugby 7s team finished sixth on July 28 after a 28-7 loss to South Africa in the Olympic final that saw Fiji defeat rival New Zealand for the gold medal.

Hughes was captain of the U.S. team this year and five years ago in Rio de Janeiro, where the 7s finished in 9th place.

China cut short the Olympic debut of Isalys “Ice” Quiñones ’19, Thayer ’20, and the Puerto Rican women’s basketball team with a 97-55 win in a preliminary round on July 27.

It was the first time Puerto Rico’s women’s basketball team had ever qualified for the Olympics and Quiñones was a major contributor to the team throughout the qualifying rounds, including scoring 10 points in the Olympic game against China.

Dong Seon “Peter” Kim ’12, the lone member of the South Korean equestrian team, was eliminated in the qualifying round of individual dressage on July 24. He achieved an overall rank at the Tokyo Olympics of 55th in the event. 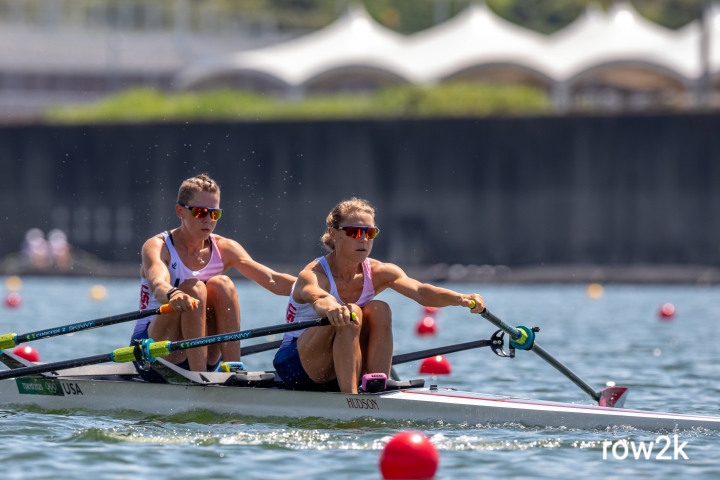 Italy, the team that edged out Reckford and Sechser by 0.18 seconds for a world record in the semifinals Tuesday, dominated Wednesday’s race to win the gold medal. Reckford and Sechser started at the back of the pack but improved their pace to move up from the sixth to the fifth position at the halfway point.

But it was not enough, and Team USA finished 1 second behind Italy’s top time of 6:47.54. France won the silver medal 0.14 seconds back, and the Netherlands took the bronze crossing the finish line 0.49 seconds behind Italy. Great Britain’s team finished fourth half a second behind the winning pace.

Molly Reckford ’15 and her USA Rowing teammate Michelle Sechser broke the previous world record and finished second in the lightweight women’s double sculls semifinal Tuesday. The race for the medals at the Sea Forest Waterway in Tokyo Bay is scheduled for tonight at 9:10 EDT.

Reckford and Sechser led the field through the midpoint of the race but finished just 0.18 seconds behind Italy’s new world record time of 6:41.54 at the line. Both teams beat the previous world record.

Reckford told row2k.com, “I’ve begun almost thinking about my time, my hiatus post-college, like that was the anomaly—not this. This is really coming back into who I am, coming back into where I want to be, and what I wanted to be doing.”

That brings the total to four alumni and one undergraduate participating in the Summer Games, which kick off with the opening ceremony today and run through Aug. 8.

Kim was a member of the equestrian team for a time in his first year at Dartmouth and went on to compete internationally in dressage for South Korea after graduation, including at the 2016 Summer Olympics in Rio de Janeiro. Before coming to Dartmouth, Kim won a team gold medal in the 2006 Asian Games in Doha and won team gold and individual silver medals at the Asian Games in 2010 and 2014.

The Olympic opening ceremony began today at 6:55 a.m. Eastern time and will be live-streamed on NBCOlympics.com. The primetime broadcast begins at 7:30 p.m. Eastern time on NBC and will feature recapped coverage of Team USA, the Parade of Nations, and ceremonial festivities in the National Stadium in Tokyo.

Three alumni and one undergraduate are headed to Japan to compete in the Tokyo Olympics, which begin July 23.

Two women will notch firsts as Olympians. Isalys Quiñones ’19, Thayer ’20, is part of the first Puerto Rican women’s basketball team to compete at the Games, and Ariana Ramsey ’22 is the first Big Green women’s rugby player to represent her country at the Olympics as a member of Team USA women’s rugby 7s.

I feel very blessed to be in this situation.

Molly Reckford ’15, who continued her rowing career after graduation with two top world championship finishes in 2019, makes her first trip to the Olympics this year with Team USA rowing, and 2016 Olympian Madison Hughes ’15, returns to the Summer Games with the U.S. men’s rugby 7s team.

“The determination and passion of these athletes are inspiring,” says Peter Roby ’79, interim athletics director. “They have demonstrated a commitment not only in competition but also in their fields of study while students.”

Dartmouth has sent athletes to compete in every summer and winter Olympics going back many decades, but Roby noted that this group has overcome unprecedented obstacles to get to the Games. “Having to shut down their preparations in the face of a worldwide pandemic while maintaining the focus and discipline necessary to remain in top condition for a competition that was pushed off to an uncertain future is truly remarkable.”

Here are profiles of the four Olympians:

In his first year, Hughes was a major player on the Dartmouth men’s club rugby team that won a national championship , he led the team to an Ivy Rugby title, and he played during his senior year with the U.S. national team that won a berth in the 2016 Summer Olympics in Rio de Janeiro.

The history major returned to Dartmouth after securing his slot in Rio to finish his degree, and then went on to captain the U.S. rugby 7s team to a 9th place Olympic finish. Hughes attracted international attention for the sport, which was new to Olympic competition in 2016, and he has made frequent appearances as a commentator. Hughes returned from an injury in 2018 to captain the U.S. national team in the first-ever U.S. hosted Rugby World Cup, and he now heads to the Tokyo Games as captain and as an Olympic veteran.

Quiñones, known as “Ice” to her teammates, led Dartmouth women’s basketball in her senior year, averaging 14 points a game and winning the Gail Koziara ’82 Most Valuable Player Award for the season. The California native earned her BA and BE in engineering sciences and told Dartmouth Engineering News, “engineering definitely relates to basketball, again with that team aspect, that’s what I relate to the most.” She says she is thrilled to be part of the first-ever Puerto Rican women’s basketball team to compete in the Olympics. “We made history,” she says. “When you’re an athlete you dream of the highest level you can get to, and for a lot of athletes that is the Olympics. It is for me. … To be able to say I’m both an Olympian and an engineer is a mouthful, that’s for sure.”

Ramsey is one of three National Intercollegiate Rugby Association players to qualify for the Olympics and the first Dartmouth women’s rugby player to compete in the Games. Ramsey joined the Big Green team as in her first year and stood out as a sophomore when she was second overall in points and was named to the U.S. Pan American Games Women’s Sevens Team. Her junior year was interrupted by the COVID-19 pandemic, but she pushed through it to attend competitive training camp in Dubai and has been living and training at the Olympic Training Center of Chula Vista in San Diego for much of the past year. She has also stayed connected with campus; she is affiliated with the Magnuson Center for Entrepreneurship, and speaks French and Mandarin Chinese.

“I can’t begin to explain how proud we are of Ari,” head women’s rugby coach Katie Dowty told Charlotte Brackett, assistant director of Varsity Athletics Communications. “She’s proven her resilience and ability to meet challenges at a world-class level to earn this incredibly special opportunity.”

Reckford walked onto Dartmouth’s open weight rowing team in her freshman year and finished her senior year with a win in the Eastern Sprints Regatta Petite Final and placed second in the Petite Final at the Ivy League Championship. She graduated with a double major in government and psychology; she was a Collegiate Rowing Coaches Association scholar athlete and a War and Peace Fellow at the John Sloan Dickey Center for International Understanding. She has continued her competitive rowing career after graduation while working as an analyst for Citi Group. Reckford and her rowing partner Michelle Sechser qualified for the Olympic U.S. lightweight women’s double sculls team in May, winning all three of their races in the 2021 World Rowing Final Olympic Qualification Regatta in Lucerne, Switzerland. “This was the most pivotal 25 hours of my life so far,” Reckford told Brackett after the race. “I am so ecstatic that I get to keep racing with Michelle and trying to make it to the highest level possible in sport. I feel very blessed to be in this situation knowing we earned it.”