The work was shaped through a consultative process that incorporated input from faculty, staff, students, and alumni. 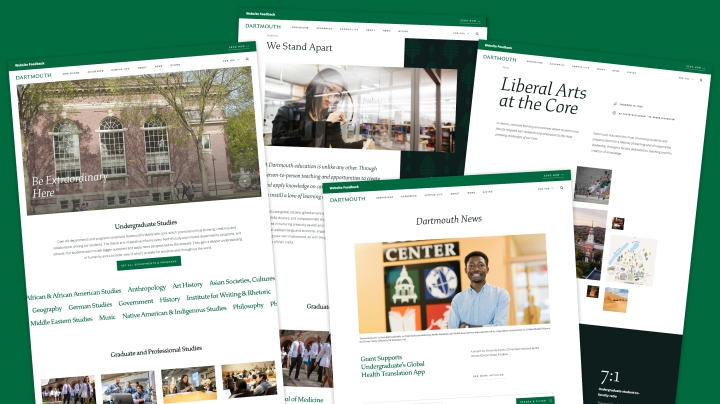 After 18 months of work, the redesigned Dartmouth home site was launched today.

Led by executive sponsors from across the institution and a working group composed of staff members from the Office of Communications (OOC), Web Services, and Conferences and Events, the work was shaped through a consultative process that incorporated input from faculty, staff, students, and alumni. In addition, many members of the community submitted comments to the OOC after the launch two weeks ago of the beta version of the site, which informed the version launched today.

“I’m so proud of our team for completing this important project,” says Justin Anderson, vice president for communications. “It has been a considerable undertaking that reflects the input of so many members of the Dartmouth community.”

Traffic to the home site, which includes the Dartmouth.edu home page, accounts for about 30% of the nearly 36 million page views of Dartmouth web properties each year. The redesign included the integration of Dartmouth News, which had been a separate website. The project did not include changes to the graduate and professional school websites, the arts and sciences department and programs, the admissions website, and the athletics website, among others.

Along with Anderson, the project’s executive sponsors were Lee Coffin, vice provost for enrollment and dean of admissions and financial aid; Mitch Davis, vice president and chief information officer; Joseph Helble, former provost; Laura Hercod, chief of staff in the Office of the President; Bob Lasher ’88, senior vice president for advancement; Kathryn Lively, dean of the College; Matthew Slaughter, dean of the Tuck School of Business; and Elizabeth Smith, dean of the Faculty of Arts and Sciences.

The OOC-Web Services redesign team was led by Bucci, who worked with Clark, Chiappa, Morgan, Megan Landgraf, web content producer; Corinne Girouard, digital asset manager; and Fernando Inglesias, senior Drupal developer. Also working on the redesign was OOC student intern Lily Scott ’24. The web design firm Third and Grove worked with Dartmouth on the project, which was approved in 2019 as part of the capital expense budget.

The redesigned site offers a number of new features, including individual “For You” landing pages which users can access from the homepage. The pages are designed especially for students, faculty, staff, alumni, the news media, families, and friends and neighbors and provide the resources each group uses most frequently, based on feedback from community members and user data. Watch Vox Daily in the coming weeks for highlights on other new site features.