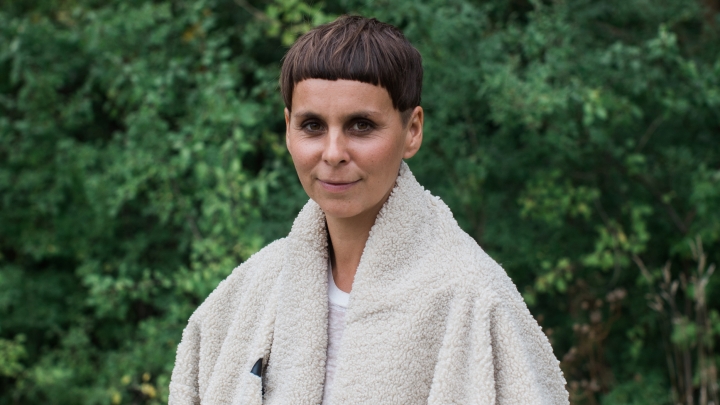 Composer Ash Fure, an associate professor of music, will be launching a new Sonic Arts Hub on campus this spring. (Photo by Clare Gatto)
9/07/2021
Body

After five years of intense innovation and production on the international contemporary music circuit, Associate Professor of Music Ash Fure is back on campus, eager to resume teaching while launching Dartmouth’s first laboratory for sonic art.

The composer, a 2017 recipient of the Samuel Barber Rome Prize, was a Guggenheim fellow and a finalist for the 2017 Pulitzer Prize in Music. More recently, Fure has won accolades around the globe for stunningly unconventional work that blends immersive installation and sonic performance. Hive Rise: for Subs and Megas (2020) was commissioned by Club TransMediale and premiered in Berlin’s iconic nightclub Berghain. Filament: for Trio, Orchestra, and Moving Voices (2018) was commissioned and premiered by the New York Philharmonic. The Force of Things (2017), an installation opera that had its world premiere at Peak Performances at New Jersey’s Montclair State University, is scheduled to run Jan. 13-15 at the Hopkins Center for that Arts. It’s a collaboration with Fure’s brother, Adam Fure, an architect who designed the space from which sounds unpredictably emerge.

“Tones made tactile, objects made audible, noise made beautiful,” wrote The New York Times about the piece.

Over the past year, with frenetic travel on hold, Fure happily found a kind of stillness that spurred further creativity. Among her “lockdown” projects is a participatory listening score, designed for ears in quarantine, called Interior Listening Protocol.

Fure’s fascination with sound was sparked during a move from one small town to another in Michigan’s Upper Peninsula. “I was about to turn 5, the youngest in a large family, and I can remember seeing a beat-up old upright piano my parents had recently bought being loaded into the moving truck,” Fure recalls. “It was the last thing to go in, and I just sat down and started plunking away.”

Right away, Fure began taking lessons—and liberties—on the keyboard. “I never called it composing. It was just something I instinctually did.”

At the Interlochen Center for the Arts, Oberlin College, and Harvard University’s doctoral program, Fure mastered, but eventually rejected, the tonal, rhythmic foundations of Western music.

“The system-driven compositional methods I learned in school always left me cold. They felt more cerebral than visceral, all about top-down power and material control. I didn’t want to work with pitches that did what I what told them to do. I wanted to touch chaos. I wanted to shape acoustic energies that had their own vitality and will.”

A Place for Creation

Fure joined the Dartmouth faculty in 2015 because “it felt really dynamic and promised quite a lot of freedom in terms of how an incoming faculty member could help shape the graduate program and help impact the undergraduate program.”

Next spring, Fure will open a new Sonic Arts Hub at 4 Currier Place in downtown Hanover.

“We’re designing it to offer a really different vibe and platform for student sound makers, and our hope is it becomes a wellspring for collaborative creativity and community connection.”

I’m really trying to invite students to open up to the relationship between their bodies and sound.

Fure wants student composers to generate all kinds of sound, not just musical notes, and to build multisensory environments and experiences.

“The first image in the introductory slide show for my sonic arts class says, ‘Fly Your Auditory Freak Flag.’ I’m really trying to invite students to open up to the relationship between their bodies and sound, deepening their awareness of what sound can do to their social environments, to their emotional interiors, to their political hungers, and their desires to have an impact on the world.”

Fure’s own impact as an artist continues to grow, both on and off campus.

”I’ve just been named co-director of The Industry, an experimental opera company in Los Angeles,“ Fure says. ”It’s an absolute dream scenario, because The Industry weaves radical immersive performances into the fabric of the city."

Don’t be surprised to hear—and see—something equally unconventional happen in Hanover this year.

The temperatures and evaporative demands associated with this drought were not possible without the global warming that’s occurred.