Dartmouth research proposes an experiment to produce ‘something from nothing.’ 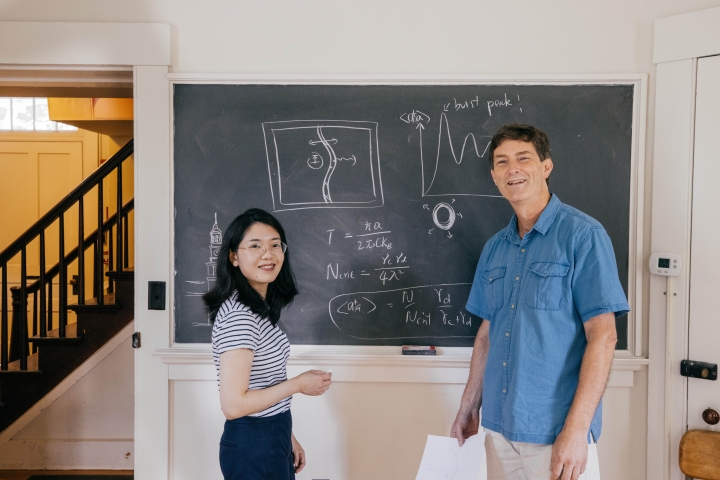 Hui Wang, Guarini ’21, a postdoctoral researcher, and Miles Blencowe, the Eleanor and A. Kelvin Smith Distinguished Professor in Physics, have described an experiment that could allow researchers to produce and detect light in a vacuum, as demonstrated in the illustration below. (Photo by Robert Gill)
9/03/2021
Body

Black holes are regions of space-time with huge amounts of gravity. Scientists originally thought that nothing could escape the boundaries of these massive objects, including light.

The precise nature of black holes has been challenged ever since Albert Einstein’s general theory of relativity gave rise to the possibility of their existence. Among the most famous findings was English physicist Stephen Hawking’s prediction that some particles are actually emitted at the edge of a black hole.

Physicists have also explored the workings of vacuums. In the early 1970s, as Hawking was describing how light can escape a black hole’s gravitational pull, Canadian physicist William Unruh proposed that a photodetector accelerated fast enough could “see” light in a vacuum.

New research from Dartmouth advances these theories by detailing a way to produce and detect light that was previously thought to be unobservable.

In the researchers’ proposed experiment, illustrated here, a postage stamp-sized synthetic diamond membrane containing nitrogen-based light detectors is suspended in a super-cooled metal box that creates a vacuum. The membrane, which acts like a tethered trampoline, is accelerated at massive rates, producing photons. (Animation by LaDarius Dennison)

“In an everyday sense, the findings seem to surprisingly suggest the ability to produce light from the empty vacuum,” says Miles Blencowe, the Eleanor and A. Kelvin Smith Distinguished Professor in Physics and the study’s senior researcher. “We have, in essence, produced something from nothing; the thought of that is just very cool.”

With science already demonstrating that observation of light in a vacuum is possible, the team set out to find a practicable way to detect the photons.

We have, in essence, produced something from nothing; the thought of that is just very cool.

Attribution
Miles Blencowe, the Eleanor and A. Kelvin Smith Distinguished Professor in Physics

The theory, published in Communications Physics, predicts that nitrogen-based imperfections in a rapidly accelerating diamond membrane can make the detection.

In the proposed experiment, a postage stamp-sized synthetic diamond containing the nitrogen-based light detectors is suspended in a super-cooled metal box that creates a vacuum. The membrane, which acts like a tethered trampoline, is accelerated at massive rates.

“The motion of the diamond produces photons,” says Hui Wang, Guarini ’21, a postdoctoral researcher who wrote the theoretical paper as a graduate student. “In essence, all you need to do is shake something violently enough to produce entangled photons.”

The study, which was supported by the National Science Foundation, is the first to explore using multiple photon detectors—the diamond defects—to amplify the acceleration and increase detection sensitivity. Oscillating the diamond also allows the experiment to take place in a controllable space at intense rates of acceleration.

The detected light exists in microwave frequency, so is not visible to the human eye, but Blencowe and Wang hope that the work adds to the understanding of physical forces that contributes to society in the way other theoretical research has. In particular, the work may help shed experimental light on Hawking’s prediction for radiating black holes through the lens of Einstein’s research.

“Part of the responsibility and joy of being theorists such as ourselves is to put ideas out there,” says Blencowe. “We are trying to show that it is feasible to do this experiment, to test something that has been until now extraordinarily difficult.”