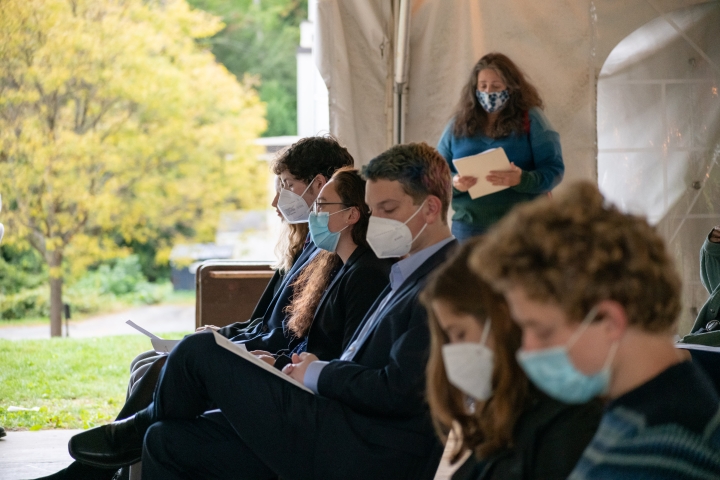 Students attend the ceremony for sophomore prize winners and new members of the Alpha of New Hampshire Chapter of Phi Beta Kappa at Dartmouth in a tent outside of Moore Hall. (Photo by Ryan McCann ’22)
10/06/2021
Body

Part live, part livestream, and held two weeks early in the hopes of mild weather, the fall meeting of the Alpha of New Hampshire Chapter of Phi Beta Kappa at Dartmouth was like none in its history. Yet the ancient rituals endured.

The 22 inductees, and recipients of this year’s Phi Beta Kappa Sophomore Prize, joined Chapter President Dennis Washburn and Secretary-Treasurer Kate Soule, who presided over Thursday’s meeting in a tent outside of Moore Hall. Guests tuned in online for the live broadcast.

The program opened with a welcome by Washburn, the Burlington Northern Foundation Professor in Asian Studies in Honor of Richard M. Bressler ’52 and a professor of comparative literature and of film studies. Soule, director of arts and sciences finance and research administration, went over the principles of Phi Beta Kappa, the nation’s oldest and most prestigious academic honor society. And, speaking via video, Chapter Vice President Susannah Heschel outlined its history.

Membership is a “supreme honor and a tribute to academic achievement at the highest level,” Heschel, the Eli M. Black Distinguished Professor of Jewish Studies said.

In a tradition dating back to the Dartmouth chapter’s founding in 1787, the new members were asked to sign their names to a roster. And they pledged to adhere to the principles of the honor society, which emphasizes academic excellence and the pursuit of truth.

The inductees had barely said “I do” when a downpour hit.

“The heavens have opened for you,” said Washburn, over the clatter of rain. “So that’s great.”

The following members of the Class of 2022 were inducted:

These members of the Class of 2023 received the sophomore prize, which is awarded to students with the highest academic ranking after completing five terms at Dartmouth, no later than two years after matriculation: 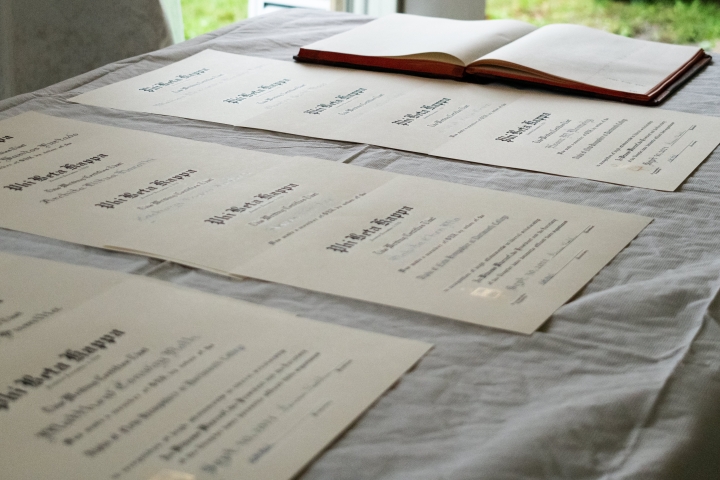 The new members of Phi Beta Kappa each received a certificate hand-lettered by Kate Soule, secretary-treasurer of the Dartmouth chapter. (Photo by Ryan McCann ’22)
Photos