A Fast Track to Radio Journalism 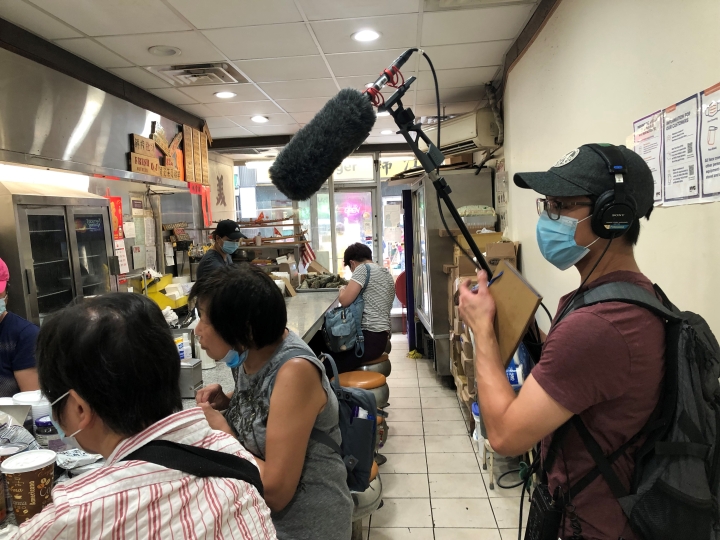 Soon after Daniel Lam ’22 wandered into the studios of WDCR, Dartmouth College Radio, during first-year orientation week, he “fell in love” with broadcasting, he says. He’s now the news director for the College’s online station, WEBDCR. Last summer, Lam took a big leap, snagging an internship with National Public Radio. Five of his stories have been aired by the award-winning network, and more are likely to come.

Given the competitive nature of journalism at the highest levels, that’s quite a fast track.

“I so appreciate the opportunity that I was given at NPR because I fully realize that I had to beat out master’s candidates and college graduates for the internship,” says Lam.

Lam’s most recent sound-rich-piece, which NPR aired on Oct. 17, draws on personal experience.

He lives in New York City with his father, a native of Hong Kong; his mother, whose family emigrated from China in the early 1900s; his younger sister; his grandmother; and his aunt. They all love dim sum, those tasty morsels of Chinese cuisine served on small plates.

“During the summer I went out with my dad to look for dim sum, and all of our favorite places were closed,” says Lam. “It’s a volume business. And so when you can’t have that big dining room, when people are afraid to go out for both COVID health reasons, and also because of the anti-Asian hate over the past year, there are just no customers.”

But the restaurant where Lam produced an NPR “audio postcard” beat those odds.

“Dim sum is more than food,” Lam reports after speaking with regular customers. “It’s a time to catch up, gossip, even conduct business. It’s about being with friends and family.”

I so appreciate the opportunity that I was given at NPR because I fully realize that I had to beat out master’s candidates and college graduates for the internship.

For a more somber story, on which he shared a byline with veteran NPR reporter Melissa Block, Lam interviewed children of people killed in the 9/11 attacks. He has a personal connection to that report, too.

That tantrum may have saved his mother’s life, because she missed her usual train.

“By the time she got downtown, the planes had already hit,” Lam says.

The story he proposed to NPR took an unusual angle.

First as an intern, then as a freelancer, Lam has also reported for NPR about racial bias in military discipline, political candidates trying to overcome Anti-Asian hate, and the dangers of outdoor grilling. He attributes his early on-air success to NPR’s rigorous intern training program, and to editors who saw his potential and helped him develop it. A government major, he says he would love to pursue a career in public radio, perhaps at an NPR affiliate station.

In fact, he’s already well along that road. For his next NPR story, he hopes to document the return to holiday traditions in a New York neighborhood which had to “hit pause,” last year, due to COVID-19.