A new book, “War and American Life,” continues his work lifting up those who serve. 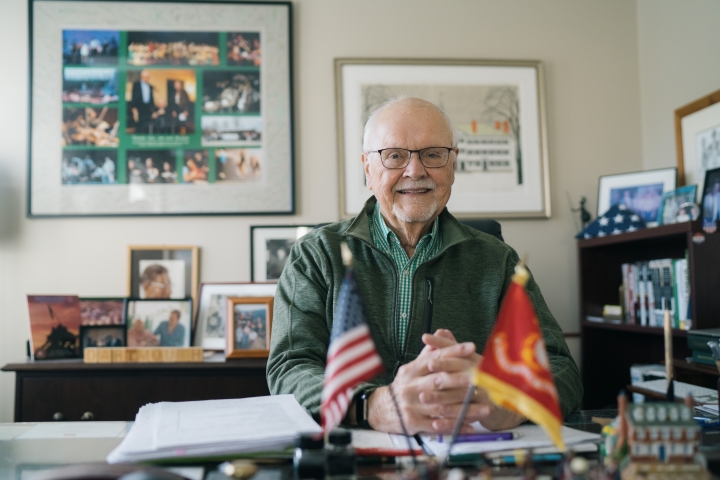 From Service to Student Life: Veterans Discuss the Transition to College

President Emeritus James Wright had already submitted the final draft of his forthcoming book, War and American Life: Reflections on Those Who Serve and Sacrifice, when the chaotic final withdrawal of U.S. troops from Afghanistan unfolded over 11 days at the end of August.

“After Labor Day, I wrote the publisher and said, ‘I think I need to have some of this back. I want to revise something,’ ” says Wright, a Marine Corps veteran, historian, and president of Dartmouth from 1998 to 2009.

“I was able just in the last few weeks of September to reflect again on the war in Afghanistan, and I was able to think once more about my own experience with some of the veterans, and also, my perspective as a historian and somebody who’s lived through this for a number of years.”

James Wright’s two recent books are shown with a cover proof for his forthcoming work, War and American Life. (Photo by Eli Burakian ’00)

Former trustee Nate Fick ’99, a Marine Corps veteran who served in Afghanistan, has said on many occasions that James Wright is very probably the only Marine lance corporal to become a college president. Wright was also the first in his family to graduate from college. He went on to earn a PhD in American history, became an Ivy League president, and remains a fierce advocate for veterans in higher education.

The work that President Wright does for veterans cannot be overstated.

He was an early advocate for the Post 9/11 GI Bill and he worked with U.S. senators to develop the Yellow Ribbon Program, which encourages private colleges and universities to cover additional costs beyond what the Veterans Administration would pay for veterans’ education.

“The work that President Wright does for veterans cannot be overstated,” says Student Veterans Association President Ryan Irving ’24, a Marine Corps veteran who served in Afghanistan.

“President Wright was the first leader of an Ivy League school to openly encourage veterans attending their schools or their programs. His work even went further. Once you got them in these schools, his work with the Yellow Ribbon Program allowed them to come free of any financial barriers.”

Wright will speak in Filene Auditorium on Thursday at 5:30 p.m. The program, Veterans Today and the Wars in Which They Have Served, is hosted by the Nelson A. Rockefeller Center for Public Policy and the John Sloan Dickey Center for International Understanding.

Brandeis University Press is the publisher of Wright’s forthcoming book, War and American Life: Reflections on Those Who Serve and Sacrifice. (Spring 2022)