Information about familiar faces is shared across the brains of people who know each other. 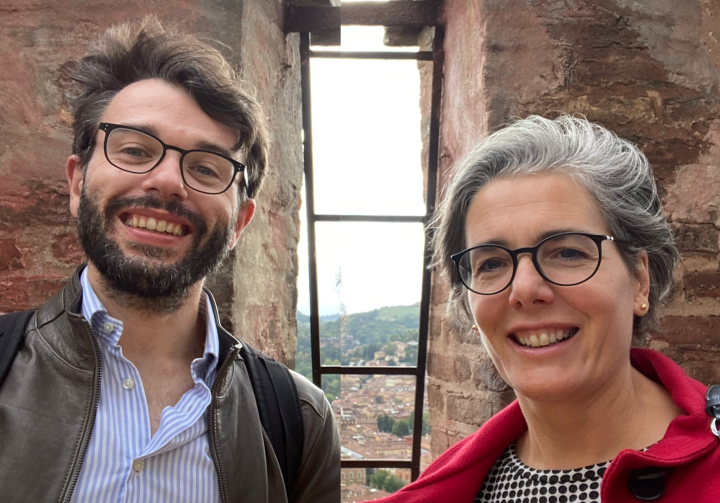 The ability to recognize familiar faces is fundamental to social interaction, as visual information activates social and personal knowledge about a person who is familiar. But how individuals in social groups process this information in their brains has long been a question. Distinct information about familiar faces is stored in a neural code that is shared across brains, according to a new study published in the Proceedings of the National Academy of Sciences.

“Within visual processing areas, we found that information about personally familiar and visually familiar faces is shared across the brains of people who have the same friends and acquaintances,” says first author Matteo Visconti di Oleggio Castello, Guarini ’18, a postdoctoral neuroscience scholar at the University of California, Berkeley, who conducted this research as a graduate student in psychological and brain sciences. “We were surprised to find that the shared information about personally familiar faces also extends to areas that are non-visual and important for social processing, suggesting that there is shared social information across brains.”

We were surprised to find that the shared information about personally familiar faces also extends to areas that are non-visual and important for social processing.

For the study, the research team applied a method called hyperalignment to create a common representational space for understanding how brain activity is similar among participants. The team obtained fMRI data from 14 graduate students in the same PhD program in three sessions. In one session, participants watched parts of the film The Grand Budapest Hotel. This data was used to align to participants’ brain responses to a common representational space. In the other two fMRI sessions, participants were asked to look at faces of fellow graduate students with whom they were personally familiar and at faces of strangers with whom they were visually familiar, but about whom they had no other information. The researchers used machine learning classifiers to predict what face a participant was looking at based on the brain activity of the other participants.

This research builds on the team’s earlier work, which found that these theory-of-mind areas in the brain are activated when a person sees someone personally familiar.

“This is what allows us to interact in the most appropriate way with someone who is familiar,” says senior author Maria (Ida) Gobbini, a research associate professor in the Center for Cognitive Neuroscience and associate professor in the department of experimental, diagnostic, and specialty medicine at the University of Bologna. For example, how you interact with a friend or family member may be quite different from the way you interact with a colleague or boss.

“It would have been quite possible that everybody has their own private code for what people are like, but this is not the case,” says co-author James Haxby, professor of psychological and brain sciences. “Our research shows that processing familiar faces really has to do with general knowledge about people.”