Researchers hope to use them to selectively filter molecules. 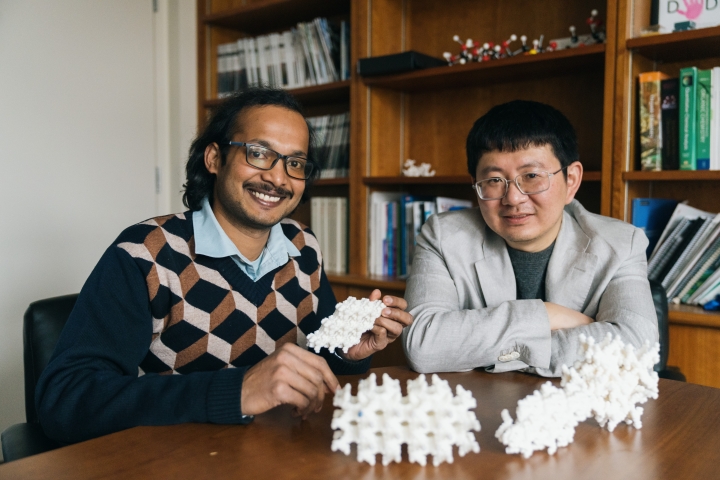 Researchers have discovered a new way to make crystals stretchy, a modification that could enable them to act as very effective nanofilters.

“Picture a diamond that behaves like a rubber band,” says Assistant Professor of Chemistry Chenfeng Ke. His research team has designed a new type of porous, carbon-based crystals that can stretch to more than twice their length.

Known to chemists as porous organic frameworks, these materials are typically hard. They are built from a scaffold of lightweight organic molecules like carbon, oxygen, and nitrogen. Additional molecular crosslinks are chemically stitched in to strengthen the structure. Their structures resemble open nets full of voids, or pores, that can house a variety of molecules as guests. This allows them to act as filters that can remove certain pollutants from air and water, or separate and store commercially important chemicals. The size of the pores usually determines which molecules can be absorbed and stored.

By tweaking the design of the molecular building blocks, the researchers have now made it possible for specific chemicals to make the crystal expand. It’s as if some molecules have a key that can unlock a whole lot of extra space that they can now occupy, says Jayanta Samanta, a research associate in the Ke Functional Materials Group.

Picture a diamond that behaves like a rubber band.

In a paper published in Chem, the researchers describe how they build in this feature by adding what they call “soft joints” into the crystal’s scaffold. The joints are made of ions that repel each other but are coaxed into place by interactions with other molecules in the scaffold. When they encounter the right chemical, however, they are readily disrupted, and push away from each other. This makes the crystal expand, but only as far as its crosslinkers will allow.

Samanta, lead author of the paper, describes the crystals as tiny, hard needles, about half a millimeter in length. He recalls the breakthrough moment when he first placed one in a solution of phenol, an organic compound widely used in household cleaners. It stretched to twice its length in under 20 minutes, he says. When the phenol was washed away, it regained its original shape in half that time.

“Seeing the crystal expand and contract to this extent is remarkable,” says Ke, who is particularly struck by the rapidity of the expansion. This physical response to specific chemicals in their environment can be used for interesting applications, he says. Ke is eager to put the new design to work by creating similar crystals that can absorb impurities from water.