The geographers are recognized for significant contributions to the field. 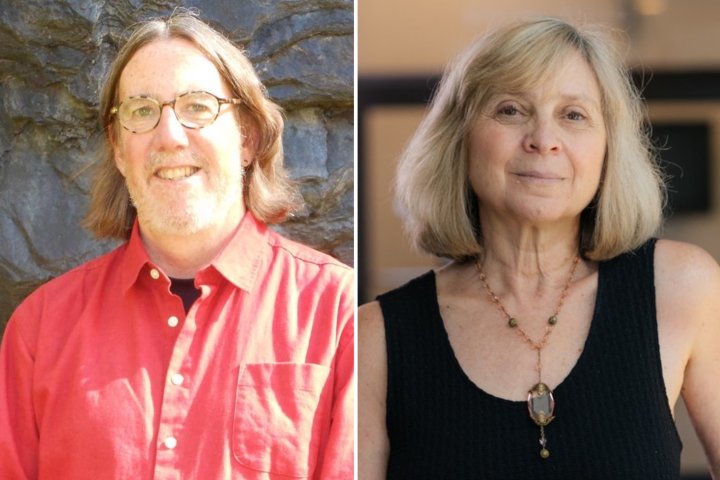 Frank Magilligan and Mona Domosh were named Fellows of the American Association of Geographers.
1/28/2022
More Reading

Professors Mona Domosh and Frank Magilligan were each named a Fellow of the American Association of Geographers for careers that made significant contributions to the field.

Elected as a 2021 AAG Fellow, Domosh, the Joan P. and Edward J. Foley Jr. 1933 Professor of Geography, was recognized as “one of the pioneers of feminist geography and a driving force behind making the discipline more welcoming to women. Through her publications she has challenged the discipline—then mostly male and white—to become more inclusive.”

Magilligan, the Frank J. Reagan ’09 Chair of Policy Studies, was elected a 2022 AAG Fellow in recognition of his “seminal contributions to our understanding of human impacts on natural river systems, and the influence of extraordinary natural events on river dynamics.” The association also noted that he is “renowned for his teaching in the Department of Geography at Dartmouth College.” AAG’s announcements of the 2021 and 2022 fellows came at the same time earlier this month because last year’s nominating process was delayed due to the COVID-19 pandemic and other factors.

When you look in the rearview mirror and you see you’ve assembled a level of productivity and scholarship that’s been recognized by your colleagues, that is really a great feeling.

Domosh says the announcement was a great honor, and she credited colleagues in the 1980s and ’90s as co-creators of the field of feminist geography as they began confronting how male-centered the discipline was “in terms of both the people who inhabited it but also the subjects that were studied.”

As the subfield grew, Domosh cofounded Gender, Place and Culture: A Journal of Feminist Geography. AAG also recognized Domosh as “a leading voice in urban and historical geography.”

“The journal was key in the development of the field. It succeeded beyond anything we could have imagined,” Domosh says. “In 1992 when we were struggling to get the journal out—trying to find people who would contribute to it—if anyone had said that 30 years later it would be one of the most successful journals, and awards will mention it, we would have just laughed.”

In addition to Magilligan’s productivity in the field of geomorphology, AAG cited his leadership and mentoring in the discipline of geography, and the association made special note of his teaching. Magilligan has co-published many papers with undergraduate and graduate students and was co-author on two undergraduate honors theses that went on to be published in the Annals of the American Association of Geographers, the premier peer-reviewed journal in the field.

“We tell our colleagues when they are coming up for tenure that they should target the Annals of AAG or a journal that has that kind of reputation,” Magilligan says. “For two undergraduate students to have their work premiered there is pretty important.”

Magilligan, who had also been elected a Fellow of the Geological Society of America in 2013, says being named an AAG Fellow spurred him to look back over his career.

“You’re not aiming for awards when you start out doing this, you’re just aiming—well you’re aiming for survival—but you’re just doing things that are interesting, and things that you’re curious about. So when you look in the rearview mirror and you see you’ve assembled a level of productivity and scholarship that’s been recognized by your colleagues, that is really a great feeling.”