Educator Robert S. Harvey asks, ‘How will you bend the moral arc of this universe?’ 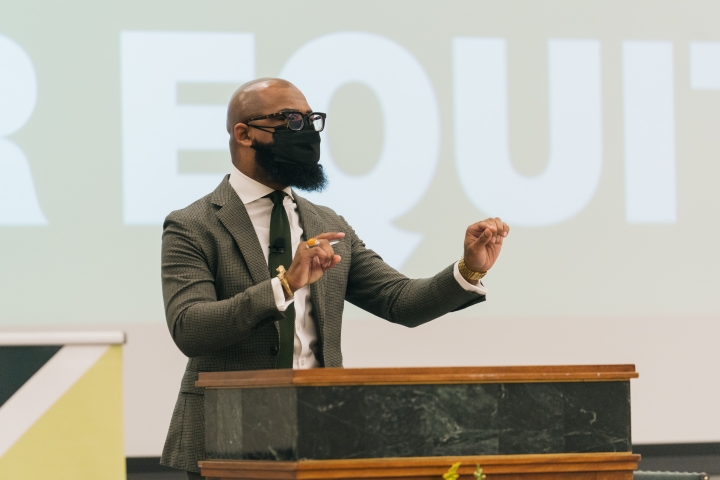 The video of the keynote address is available at the Dartmouth MLK Celebration site.

“Against the backdrop of 12 months of a global pandemic wrestling with the social, racial, political, and epidemiological reckoning that has brought all of us face to face with masked truths about the compounding complexities of inhumanity, inequality, injustice, and incompetence, what’s love got to do with it?” Harvey asked.

Love is indeed the embodied and enfleshed ethic of justice.

“After years of navigating the persecuting complexities of what it means to be human and Black in this country, love has everything to do with it,” he answered. “Because love is more than a secondhand emotion. Love is indeed the embodied and enfleshed ethic of justice.”

Harvey is the superintendent of East Harlem Scholars Academies, a community-based network of public charter schools in New York City, and chief academic officer of the East Harlem Tutorial Program. He is also a visiting professor in the Practice of Public Leadership at Memphis Theological Seminary, and the author of Abolitionist Leadership in Schools: Undoing Systemic Injustice through Communally Conscious Education. His second book, Teaching as Protest: Emancipating Classrooms through Racial Consciousness will be published this year.

Fusing the rhetorical power of a preacher with the intellectual rigor of a scholar, Harvey drew on such diverse sources as the music of John Coltrane, the writings of King, and the poetry of Ovid as he urged more than 250 viewers of the live-streamed event, as well as a small, socially distanced audience at the Hanover Inn, to embody, not just espouse, a kind of love for all of humanity that’s both “risky and costly.”

At this pivotal moment, Harvey warned, the world is gripped by “a crisis of lovelessness.”

More than “a failure of respectability and a failure of politeness, more than a failure to be kind to me, and to see me, it’s much more about who we take ourselves to be in this nation,” he said.

Harvey challenged members of the Dartmouth community to “bend the arc of their moral universe” by creating conditions “where we talk love, hear love, and do love in ways that don’t just educate the most promising students and prepare them for a lifetime of learning, but work with those promising students at the margins of society, walking alongside these students subjugated by supremacy, and working with those students, embodying and enfleshing a costly and urgent love—one that can only be achieved by righteous, radical and revolutionary recreation of liberation.”

Kailah Hester ’24, president of the Afro-American Society, issued a similarly heartfelt challenge in brief remarks preceding Harvey’s address. “Be curious about the experience of others and learn how you can be an ally in the struggle,” Hester said.

Concluding the question-and-answer session following Harvey’s address, Shontay Delalue, Dartmouth’s senior vice president and senior diversity officer, asked him to define the opposite of a “crisis of lovelessness.” 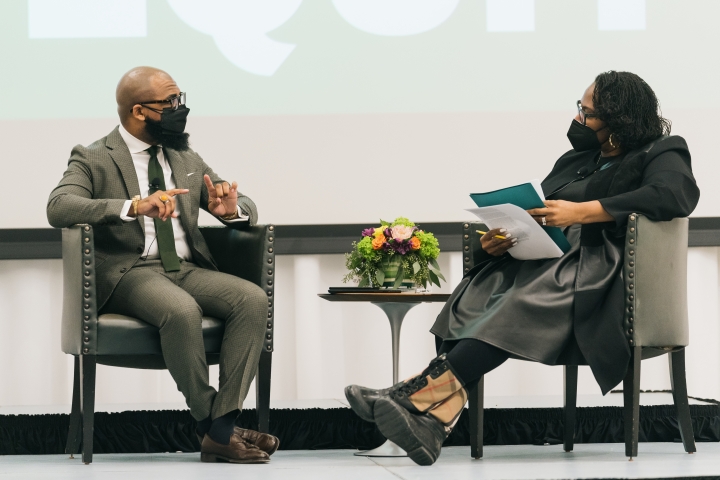 The Martin Luther King celebration continues over the next two months. See the schedule of events.