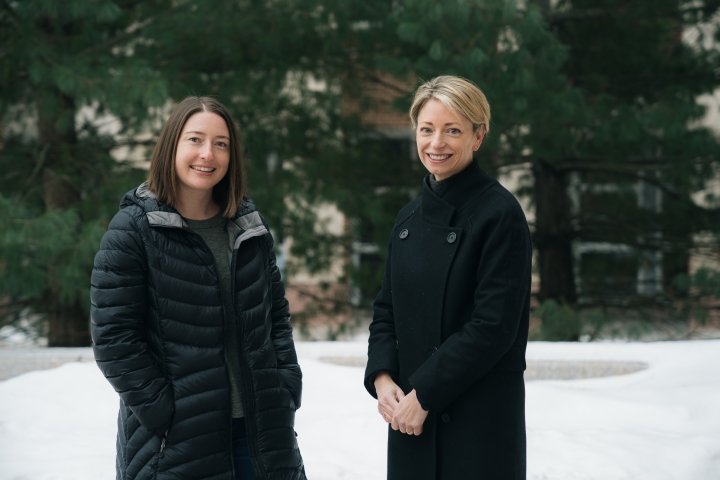 When two people are on the same page in a conversation, sometimes their minds just “click.”

A Dartmouth study published on Tuesday in the Proceedings of the National Academy of Sciences demonstrates that clicking isn’t just a figure of speech but is predicted by “response times” in a conversation or the amount of time between when one person stops talking and the other person starts.

“We’ve all had the experience of clicking with some people but not others. We wanted to see if something in people’s conversations reveals when they click,” says first author Emma Templeton, Guarini ’23, a graduate student in psychological and brain sciences. “Our results show that the faster people respond to each other, the more connected they feel.”

Our results show that the faster people respond to each other, the more connected they feel.

The research consisted of three studies. The first examined response time and social connection between strangers. Sixty-six participants took part in 10 conversations—each with a different conversation partner of the same gender. They could discuss any topic of their choosing and their conversation was videotaped.

After it was over, participants watched the video playback and rated how connected they felt moment by moment throughout the dialogue. Conversations with faster response times correlated with feelings of greater social connection.

Do outside observers also use response times to infer when two people “click?” To test this, respondents from Amazon’s Mechanical Turk, a crowdsourcing workforce marketplace, listened to audio clips of conversations for which the response times had been manipulated to be faster, slower or the original speed, the control condition.

Consistent with the results from the earlier two studies, outside observers thought two speakers were more connected when their conversations contained faster, rather than slower, response times. Because these conversation clips were identical except for response times, the study demonstrates that response times alone are a powerful signal of social connection, according to the senior author of the study, Thalia Wheatley, the Lincoln Filene Professor in Human Relations.

“It’s well-established that, on average, there’s about a quarter of a second gap between turns during a conversation. Our study is the first to look at how meaningful that gap is, in terms of connection,” says Wheatley, the principal investigator of the Dartmouth Social Systems Laboratory. “When people feel like they can almost finish each other’s sentences, they close that 250-millisecond gap, and that’s when two people are clicking.”

Luke Chang, assistant professor of psychological and brain sciences; Elizabeth A. Reynolds ’18; and Marie Cone LeBeaumont ’22, a research assistant in the Dartmouth Social Systems Laboratory, served as co-authors of the study.