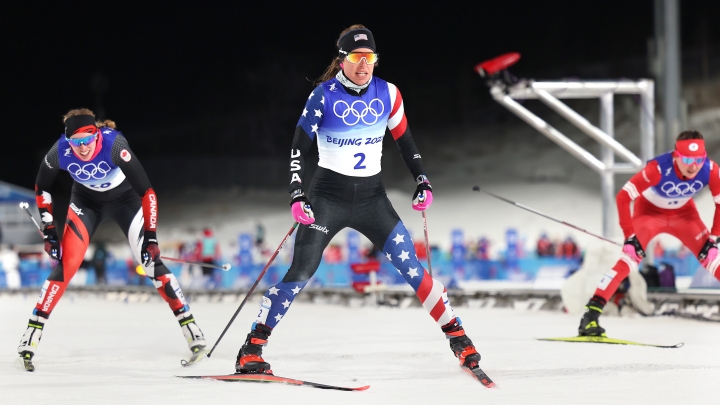 Rosie Brennan ’11 moves up to the starting line of the women’s cross country sprint finals on Feb. 8. Brennan finished fourth behind U.S. teammate Jesse Diggins, who took bronze and earned the first-ever medal for Team USA in the event. On Feb. 16, Brennan teamed up with Diggins in the team sprint classic and the duo finished fifth. In her last Olympic race, the women’s 30k freestyle on Saturday, Brennan finished sixth. Diggins took silver. (Photo by Getty Images)
2/09/2022
More Reading

A replay of the women’s freestyle sprint qualifier and fourth-place final of Rosie Brennan ’11 led off NBC’s prime-time Olympic coverage Tuesday, as the two-time Olympian was edged out by U.S. teammate Jessie Diggins for the bronze.

And in live coverage Tuesday night, the first Olympic appearance of AJ Hurt ’23 in the woman’s slalom was overshadowed when teammate Mikaela Shiffrin skied out of the race early and the media attention shifted away from the competition.

Hurt finished 34th with a combined time that was 7.21 seconds behind Slovak Petra Vlhová’s gold medal time of 1:44.98.

Hurt was tapped by Team USA to replace Nina O’Brien ’20, who suffered a brutal crash in the women’s giant slalom on Monday. O’Brien underwent successful surgery to her left leg on Tuesday and is headed home for treatment, NBC reported.

Fourth place is hard. You feel really happy and also frustrated at the same time, so I have a lot of mixed emotions about it. But I did everything I could today.

Brennan’s powerful uphill sprint in the qualifying race from earlier in the day likely was a factor in the network’s decision to start the Tuesday night show with a replay of that event. NBC analyst Kikkan Randall, who raced with Brennan and won gold with Diggins for the U.S. at the Pyeongchang Games, called out the 33-year-old Brennan’s strength, stamina, and strategy during the qualifier and medals races.

Julia Kern ’19 was also among seven Team USA skiers who advanced to the women’s sprint quarter finals, finishing 14th in the qualifier and fourth in the quarterfinal.

Brennan told reporters after the race. “Fourth place is hard. You feel really happy and also frustrated at the same time, so I have a lot of mixed emotions about it. But I did everything I could today.”