‘Giving Voice to People Who Have Been Left Out’ 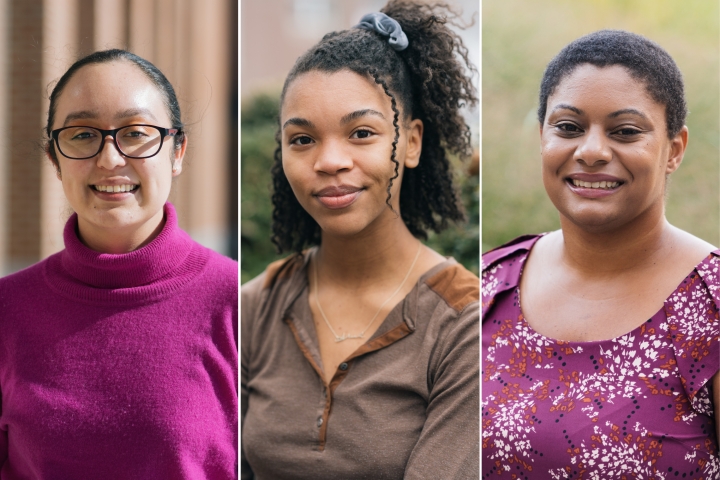 A field study of Black Bostonian speech scheduled to start just as the COVID-19 pandemic hit might have been shelved for years.

Instead, a groundbreaking online alternative has generated more—and richer—interviews than would have been possible with a more traditional approach, the researchers say.

In early 2019, Monica Nesbitt, then a Society of Fellows postdoctoral researcher, was planning to take students in her “Language and Ethnicity” class to greater Boston to interview members of the city’s Black community.

Psychology and linguistics major Akiah Watts ’22 developed a social media game strategy to engage prospective participants. Visitors to the page are invited to take short word-choice quizzes Watts and her classmates created, such as sprinkles or jimmies? Supper or dinner? In the interviews, participants weigh in on additional New England regionalisms, including “wicked smart.”

She also posted photos and descriptions of the researchers to “humanize the page,” which increases the account’s credibility, says Watts, who was recently awarded a grant from the Kaminsky Family Fund in support of her senior honors thesis in linguistics.

Where people are from is as much as part of their identity as their race or social class.

So far, those efforts have resulted in 96 interviews on Zoom, most conducted by Watts, that range from 45 to 90 minutes in length.

Had they relied on traditional field study methods—chatting with people on the sidewalk or at bus stops—completing that many interviews would have taken years and years, says Nesbitt, now an assistant professor of linguistics at Indiana University.

Research assistant Guadalupe Ortega ’23 notes that the longer format allows for a more complete understanding of each speaker, and the language they use.

In addition to asking participants to pronounce certain words, the interviewers gather extensive background information, as well as additional data, such as their perspectives on the Boston accent, says Ortega, a linguistics and women’s gender and sexuality studies major who manages the transcribers and coders and helps process the recordings. “It’s very interesting get to see the full picture of each person.”

The study’s goals include expanding the limited existing linguistic data on Black speakers in eastern Massachusetts, “giving voice to people who have been left out in the past,” says Watts.

The project also investigates whether Black speakers have Boston features, addressing a question that often seems to crop up in the literature, says Nesbitt, who specializes in phonology and sociolinguistics.

Within sociolinguistic studies in urban centers with regional features, such as New York or Chicago, a common narrative is that Black speakers do not participate in those accents, she says. “Sometimes it’s true, and sometimes it’s not.”

“Saying there are regional differences between speakers in the white community, but not within this other set of speakers, and perhaps that has something to do with their racial identity—when that just can’t be true—helps to other Black speakers,” Nesbitt says. “We know place and where people are from is as much as part of their identity as their race or social class.”

The project also looks at the pandemic’s effect on the communities being studied. Though it wasn’t planned, many participants found the conversations therapeutic, the researchers say.

Participants often talk about racial justice issues—including health care disparities related to COVID-19—and how the pandemic is affecting their families and coworkers, says Nesbitt, who will continue the research with her students at Indiana University. “We feel privileged to be documenting this.”

To align with the study’s goals, the interviews have been conducted by students who identify as Black.

“One thing that we know about sociolinguistic research is people will change the way that they speak depending on whether or not the person interviewing them has similar characteristics,” says Nesbitt.

Watts, Ortega, and their cohort, including prior fieldworkers George Stain and Soren Tyler, also ’23s, have provided “phenomenal support for this much-needed project,” Nesbitt says. “These students have been outstanding in their commitment to quantitative research, as well as pushing social justice initiatives in our work.”

The study is already being discussed on the national stage. Last year, Nesbitt, Stain, Stanford, and Watts gave a workshop, “Sociolinguistic Research in the Time of COVID: Methods, Ethics, Theory,” at the Linguistic Society of America’s annual meeting. And a related paper co-authored by Nesbitt and Watts will be published in an upcoming issue of Linguistics Vanguard.

The project received seed funding from the Society of Fellows and is now being funded by the linguistics departments at Dartmouth and Indiana University.