Expansion will add opportunities for creativity, community at the cultural arts hub. 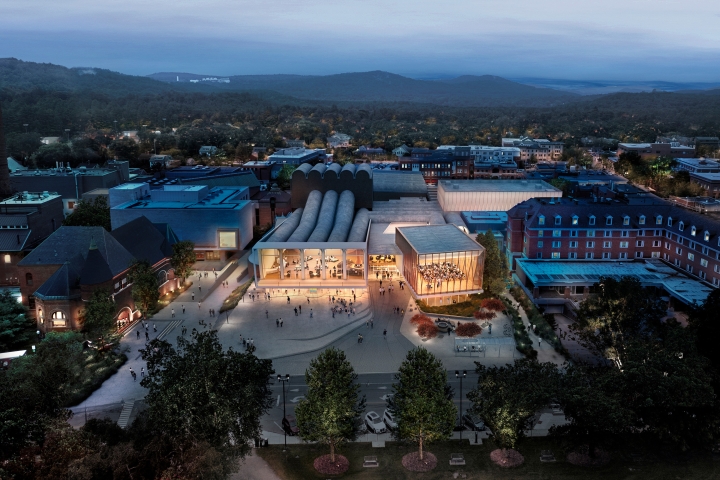 Aerial view of the transformed Hopkins Center for the Arts, featuring a new wing and plaza with inviting and flexible performance and gathering spaces that embrace the needs of today’s artists and audiences. (Courtesy of Snøhetta and Methanoia)
4/07/2022
More Reading

Dartmouth today is pleased to present the first architectural design renderings of the $88 million expansion and renovation of the Hopkins Center for the Arts, located in the heart of the Arts District.

“As an essential component of the Dartmouth liberal arts experience, the arts help Dartmouth students become curious, empathetic and creative,” says President Philip J. Hanlon ’77. “The revitalized Hop will advance our mission and enhance opportunities for artistic exploration and growth, inspiring students, faculty, staff, and alumni, and welcoming visitors from across New England and beyond.”

The expansion and renovation will create approximately 15,000 square feet of new space and transform 55,000 square feet of existing space. It reimagines the function and flow of the iconic building by creating open and flexible performance and rehearsal spaces that will meet current and future needs of students, faculty, and artists. It will enhance audience engagement by substantially improving accessibility and technological capabilities, and by establishing new spaces to gather while merging indoor spaces and a new outdoor plaza landscape.

“At a time when humanity is grappling with so many challenges across the country and around the world, our commitment to the expansion of the Hop recognizes the power of the arts in building bridges and connections when words fall short,” says Laurel Richie ’81, chair of the Hopkins Center Board of Advisors and a former chair of the Dartmouth Board of Trustees. “We have seen just how often words fall short over the last few years. The arts community helps fill the void.”

The new design honors the original 1962 architecture by Wallace K. Harrison, the architect of New York City’s Lincoln Center, maintaining the building’s overarching frame, distinctive arches, and other important spaces including the Top of the Hop, the lobby outside of Moore Theater, and Spaulding Auditorium, each of which will be renewed.

My dreams of life in the performing arts were honed and solidified in every corner of the Hop.

Led by the New York office of the design practice Snøhetta, the construction is scheduled to begin in late 2022, with the new Hop opening in 2025.

The campaign has raised $50.1 million to date for the Hopkins Center expansion. Supporters include many alumni who have gone on to distinguished careers in the arts, including David Benioff ’92, Connie Britton ’89, Rachel Dratch ’88, Mindy Kaling ’01, Chris Meledandri ’81, and Sharon Washington ’81.

“My dreams of life in the performing arts were honed and solidified in every corner of the Hop, and the profound immersive opportunities of the place have certainly shaped everyone who’s walked through it. So I am thrilled with Dartmouth’s commitment to continue and grow the Hop’s enduring and transformative legacy,” says Britton, a four-time Emmy nominee and a Dartmouth trustee.

“At the heart of Dartmouth’s campus, the Hop radiates welcome and has for generations provided space for the community to learn about one another and the world through artistic expression,” says Mary Lou Aleskie, the Howard L. Gilman ’44 Director of the Hopkins Center for the Arts. “Snøhetta’s designs build on the Hop’s founding vision, creating an inviting environment for our audiences and versatile spaces that support the aspirations of today’s artists.”

During construction, the Hop will offer a range of performances and programs staged in various locations across campus, collaborate with other venues in the region, and, when possible, continue to use spaces within the Hop. It will continue to offer an array of digital programs to engage audiences across the country and the world. Before the building reopens, students will have other spaces in which to create, rehearse, and present work.

Continued Investment in the Arts District

The Hop is situated in Dartmouth’s Arts District, which includes the Hood Museum of Art, redesigned by Tod Williams and Billie Tsien Architects in 2019, and the Black Family Visual Arts Center, completed in 2012 by the design firm Machado Silvetti. It is the next milestone in the decade-long, more than $190 million investment in the district and is part of the more than $3 billion The Call to Lead campaign, which is dramatically expanding experiential learning opportunities within Dartmouth’s liberal arts educational model.

When it opened 60 years ago, the Hop was among the first university art centers in the country to bring music, theater, dance, and film programs together under a single roof. In 1988, it was named by the National Endowment for the Arts as one of the nation’s exemplary performing arts centers.

“Our continued investment in the Arts District allows every student to have an artistic experience and uses the arts as a window to explore a breadth of issues and academic fields. The expansion of the Hop is an important chapter in enacting this vision,” says President Hanlon.

The project will address the growing demand for arts on campus, from course offerings which have wait-lists each term of upwards of 200 students to the more than 30 student-led ensembles that have no dedicated practice or performance space. It will also establish more and better space for professional artists, allow for expansion of the length and number of residencies for artists at the Hop, and provide resources for arts-related student groups and ensembles, which continue to flourish on campus. 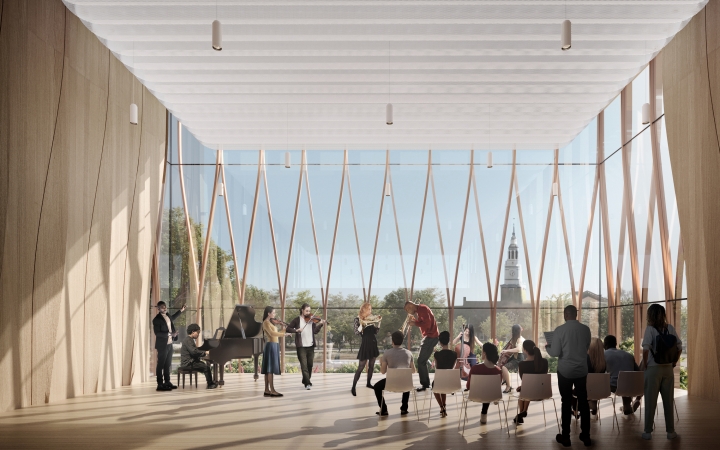 An entirely new space, the recital hall, will establish an exceptional venue for the creation and presentation of musical performances and features spectacular views of the iconic Baker Library Tower. (Courtesy of Snøhetta and Methanoia)

“With new and upgraded spaces to think, create, experience, and connect, the Hop’s role as a cultural arts hub will invariably draw even more students, teachers, creatives, and audiences to Dartmouth and our community,” says Aleskie. “It will engage students—future engineers and scientists as well as budding actors and sculptors—and offer thought-provoking, challenging concepts to broaden the kind of thinking that a liberal arts education has to offer.”

A Window on the Green

The new design is a reimagining of the Hop’s north façade along East Wheelock Street, facing the Green. Among the key design elements of the project are:

“The Hop has long been a center for creative expression on the Dartmouth campus,” said Craig Dykers, a founding partner, Snøhetta. “We’re honored to celebrate the arts through the redesign and expansion project, bringing music, theater, dance, and film together. As the prototype for an entire generation of academic and civic art centers, the Hop will be reimagined once more as the college’s cultural hub, a place of experimentation, art, and community.”

Changes Inside and Outside the Hop

The expansion and renovation will require changing some familiar features inside and outside of the Hop:

The outdoor marquee sign will be reimagined as planners consider new opportunities to share programing information through multimedia signage.

Much-needed space for students will be added where hundreds of small mailboxes for undergraduates —Hinman boxes—are located adjacent to the mail center. Hinman boxes are no longer used by students, who have been raised on digital communications and often receive packages far too large to fit in a Hinman box. Because the boxes hold a special place in the hearts of generations of Dartmouth alumni, sections of the boxes will be kept and memorialized in the new building.

The Jaffe-Friede Gallery will be relocated to a space inside the forum, giving the location more visibility.

The Darling and Zahm courtyards will be eliminated to make way for more flexible social, study, and rehearsal spaces. Darling is located in the center of the Hop and Zahm is just outside the entrance to the Minary Conference Center. A fountain and war memorial now located in Zahm will be moved to other campus locations.

Alumni Award winners recognized on plaques in Alumni Hall will be recognized in Blunt Alumni Center. This new home is open during major events such as reunions, commencement, and homecoming, and offers opportunities to enhance this recognition through expanded digital media profiles and photographs of each recipient.

The Courtyard Café will remain in the redesigned Hop and is expected to continue to draw nearly 3,000 students daily through the building when classes are in session. Designers are exploring other opportunities for food and drink within the new spaces.

The popular workshops—woodworking, ceramics, and jewelry—will stay in their current locations on the Hop’s lower level. Access to that floor will be improved with a refurbished elevator and a new set of stairs that will better connect to the building’s main entrance. 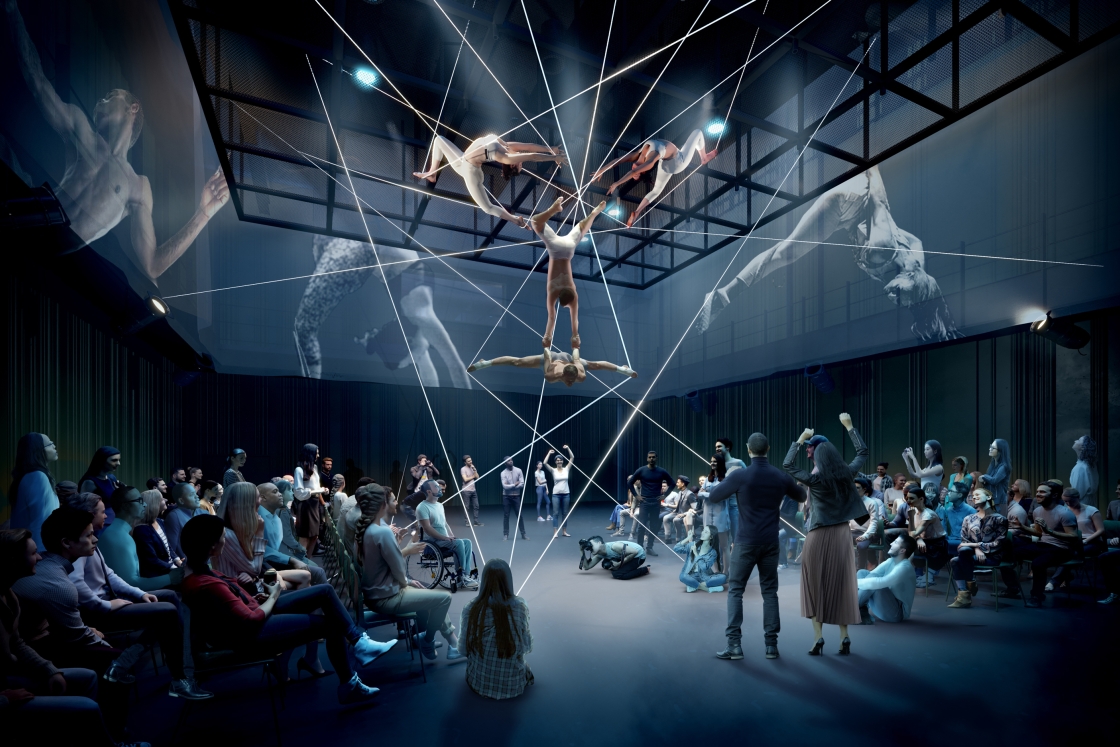 Caption
The performance lab will be the site of multidisciplinary performance innovation at the Hop, boasting the latest in sound, lighting, projection, and broadcast technologies. (Courtesy of Snøhetta and Methanoia)
Image 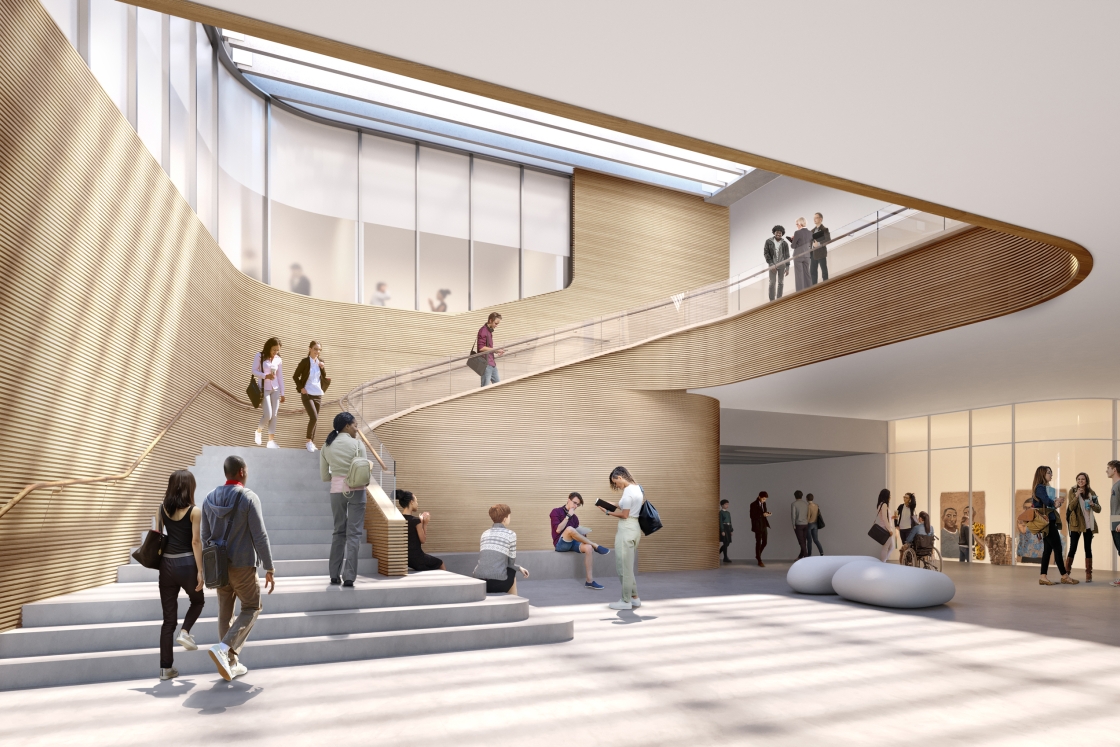 Caption
The forum is the Hop’s new central convening space, providing an orienting core for the building and conveying a vision of openness and invitation to the community to engage with the power of the arts. (Courtesy of Snøhetta and Methanoia)
Image 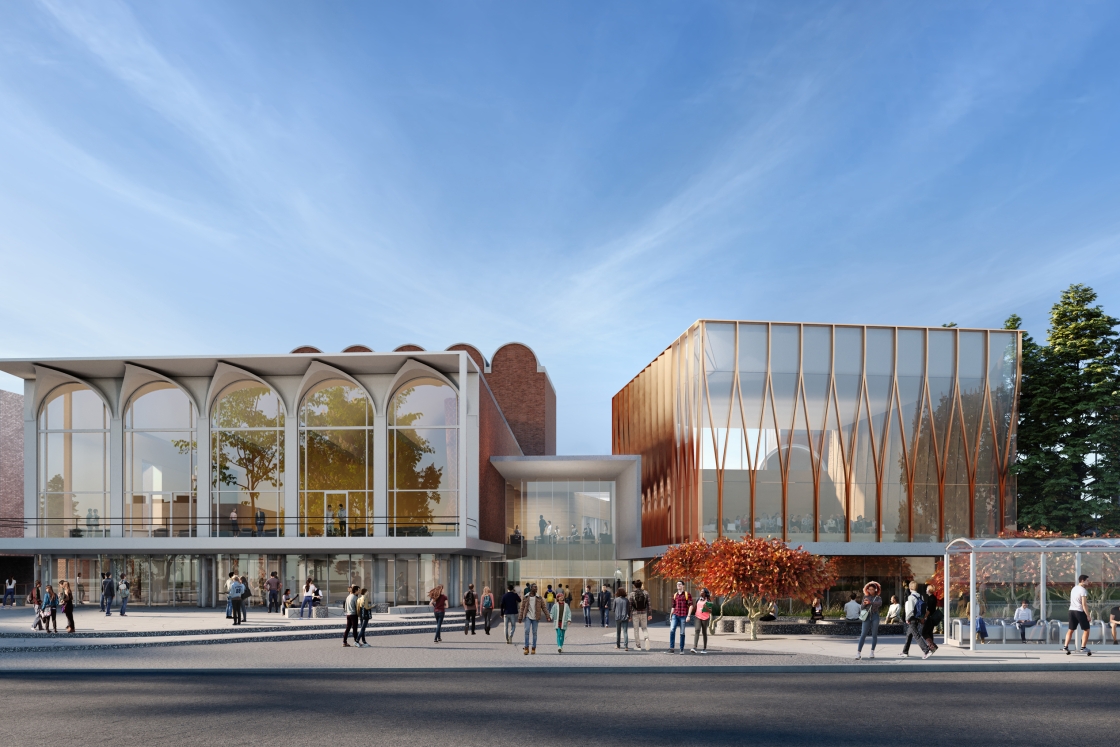 Caption
A rendering of the north facade of the Hopkins Center for the Arts includes a new wing for arts programs. (Courtesy of Snøhetta and Methanoia)
Quoted
Quote