Tyler Vergho and Arvind Shankar, both ’23s, edged out a University of Michigan team. 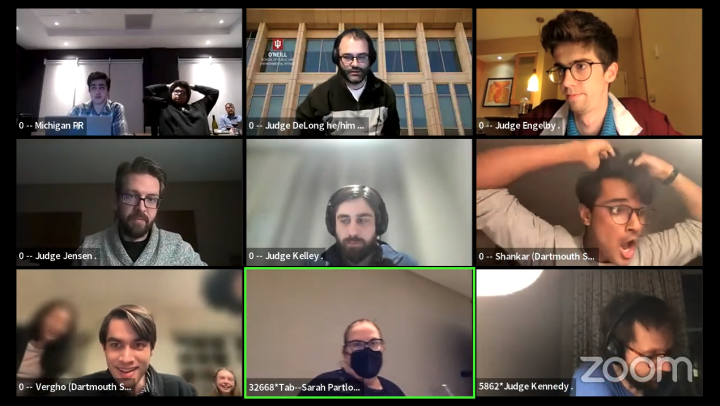 Students react to the announcement that Dartmouth debaters had won the championship. (Photo by Jacob Wilkus/YouTube)
4/14/2022
Body

For the second year running, the Dartmouth Forensic Union has won the National Debate Tournament.

Tyler Vergho and Arvind Shankar, both ’23s, defeated opponents from the University of Michigan in the annual competition, held in hybrid fashion earlier this month.

Vergho and Raam Tambe ’21 prevailed in the 2021 tournament, which was held online.

Throughout the season, teams prepare and present arguments on various aspects of a given topic.

“The entire team works hard producing in-depth research throughout the year, often dedicating 30 hours a week to the effort,” Turner says. “In particular, all of the participating debaters spent their spring break working in the DFU for 12 to 14 hours per day.”

The people on the team are my closest friends, and I’m very glad to have gone through all of this with them.

In addition to Vergho and Shankar, two other students also competed in the tournament. Holland Bald and Gabe Chang-Deutsch, both ’25s, were the first first-year students from Dartmouth to be ranked among the top 16 teams during the regular season, earning them an automatic bid to the championship.

This year’s subject was the expansion of U.S. antitrust laws. In accordance with the regulations, students speak at breakneck speed—up to 350 words a minute.

Vergho and Shankar argued that airline alliances should not be immunized from antitrust scrutiny under a public interest standard but instead should be periodically reviewed under a consumer welfare standard.

In addition to learning more than he ever expected to about antitrust law, this year he also acquired the work ethic, discipline, and determination it takes to be a nationally competitive debater, says Shankar, a member of South House.

He jumped around the room in celebration when judges announced the Dartmouth team had won.

But what Shankar likes best about belonging to the Forensic Union are the friendships and community he’s been able to build, the government and sociology major says. “The people on the team are my closest friends, and I’m very glad to have gone through all of this with them.”

The win—Dartmouth’s eighth—boosted the team into second place for the all-time number of National Debate Tournament victories, breaking a tie with Harvard.