The scholarships support work in natural sciences, engineering, and mathematics. 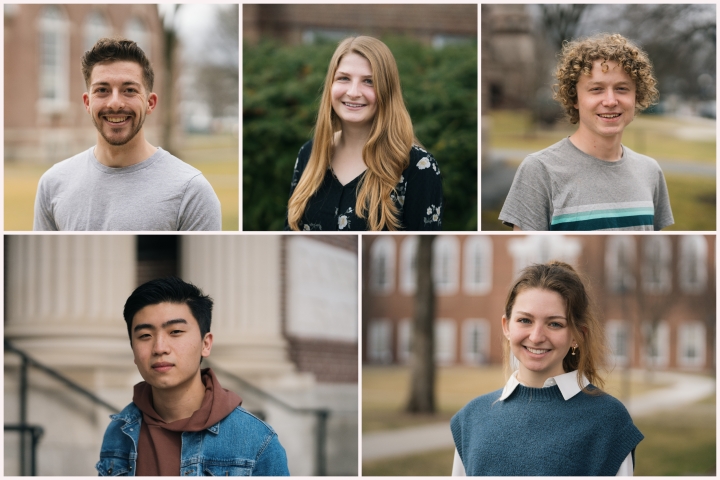 It’s a been a banner year for Goldwater Scholarships. Five members of the class of 2023 applied for the coveted award, and all five have been welcomed into the fold.

The scholarship, named in honor of the late Sen. Barry Goldwater, R-Arizona, “seeks to identify and support college sophomores and juniors who show exceptional promise of becoming this nation’s next generation of research leaders” in the natural sciences, engineering, and mathematics, according to the program’s website.

The program is among the oldest and most competitive of its kind in the United States. For 2022, some 5,000 college sophomores and juniors were nominated by 433 academic institutions. Only 417 were chosen.

Each Goldwater Scholar annually receives recognition and up to $7,500 per full academic year. The scholars from Dartmouth are:

As a structural biologist working in the lab of Jon Kull, the dean of the Guarini School of Graduate and Advanced Studies and the Rodgers Professor of Chemistry, Bowman has been taking aim against methicillin-resistant Staphylococcus aureus (MRSA), a common infection caused by a type of bacteria that’s become resistant to certain antibiotics. “The protein found in the membrane of the bacteria that I’m studying helps MRSA avoid a human’s natural immune response,” says Bowman. “By understanding how the protein works, if we can find a target to disable it, then we might be able to make a nonconventional antibiotic that would be effective.”

An active member of the Nathan Smith Society, an organization for students preparing for health professions, Bowman plans to pursue an MD with a PhD in cell biology and biochemistry. His aim: to focus on musculoskeletal biology leading to new therapies for the treatment of orthopedic injury and pathology.

“Medical schools are highly competitive,” he says. “Being a Goldwater scholar will be a real asset on my applications.”

“I’m interested in how ancient environments and the evolution of life influenced each other, especially in relation to microbial metabolism,” says Calhoun, a Stamps Scholar who conducts research in the Earth History and Tectonics lab directed by Assistant Professor of Earth Sciences Justin Strauss. “I’m a chemistry double major with earth sciences modified with biology, which is a lot, but I really enjoy the classes that I’m taking and the work I am doing.”

Her work involves the study of stromatolites. “They’re internally sedimentary structures that have been present in shallow water environments on Earth for over 3 billion years,” says Calhoun. “Since stromatolites serve as the earliest and most continuous record of life on our planet, studying them can provide insight into the evolution of life and changes in ancient environments.”

She says the Goldwater Scholarship is “amazing because it makes me feel more confident about choosing a competitive career in academia, which is my dream.”

“I have two lifetime goals,” says Lasonde, another Stamps Scholar. “One is to build a working quantum computer and the other is to combat climate change.” The engineering major with a minor in computer science is making progress toward both objectives by working in the lab of Eric Fossum, the John H. Krehbiel Sr. Professor for Emerging Technologies at Thayer School of Engineering and the vice provost for entrepreneurship and technology transfer.

“Right now, I am building a spectrometer for ensembles of Nitrogen-vacancy (NV) centers in diamond. NV centers are a type of qubit, which is the quantum analogue of a classical bit. Quantum computers have immense potential applications in the natural sciences because they are so good at simulating atoms,” says Lasonde.  The Goldwater funding will allow her to take a break from teaching assistantships and spend more time in the lab—and on another project she’s involved in.

“I’m the director of Hack Dartmouth, a student-run program which does a 24-hour hackathon every year, with up to $10,000 in prizes. We have five categories this year and the theme is ‘Hack on Your Wild Side.’”

A writer for Dartmouth’s satire magazine, The Jack-O-Lantern, a stand-up comedian on the Dartmouth Comedy Network, and a bioengineering major with a double minor in computer science and English, Sugiarto sees a connection between seeing a joke fall flat and hitting an error with his computer code. “You’ve essentially bombed in front of an audience, and you have to go back to the grindstone.” But some failures, he says, are fortunate, because they advance scientific knowledge.

At the Geisel School of Medicine’s Wang Laboratory, Sugiarto, a Neukom Research Scholar and a James O. Freedman Presidential Scholar, works with Luke Deary GR under the supervision of Xiaofeng Wang, an assistant professor of molecular and systems biology. They’re learning about the role played by a chromatin remodeling complex called SWI/SNF in many kinds of cancers. “DNA wraps tightly around histomes to form chromosomes, and SWI/SNF is able to regulate which parts of the DNA get expressed, but the mechanisms by which it impacts cancer are not clearly understood,” says Sugiarto.

The Goldwater funding will allow him to drop several campus jobs. “I’m really passionate about the research and I want to be able to focus all my time on that,” he says.

One way to fight hunger across the globe is to figure out how to make edible plants more resilient and nutritious, says Teszler, a biology major. In the lab of Mary Lou Guerinot, the Ronald and Deborah Harris Professor in the Department of Biological Sciences, Teszler is investigating how plants take in iron. Because much is already known about the role roots play in that process, he’s taking a different tack. “My research looks at plant shoots—the stem, leaves, anything that’s basically above ground. I’m studying transcription factors which help turn on genes involved in iron uptake.”

He’s planting, tending, and altering conditions for a relatively fast-growing plant called Arabidopsis thaliana. “You can use this as a model organism to help figure out what might be happening in other plants,” says Teszler. For him, the Goldwater award came at just the right time, accelerating his progress. “Because COVID-19 restrictions closed a lot of labs, I didn’t start working on this until last June, and it’s been a steep learning curve.”

After graduation, Teszler hopes to work in another research setting, perhaps at the National Institutes of Health or a pharmaceutical lab, before pursuing a PhD.