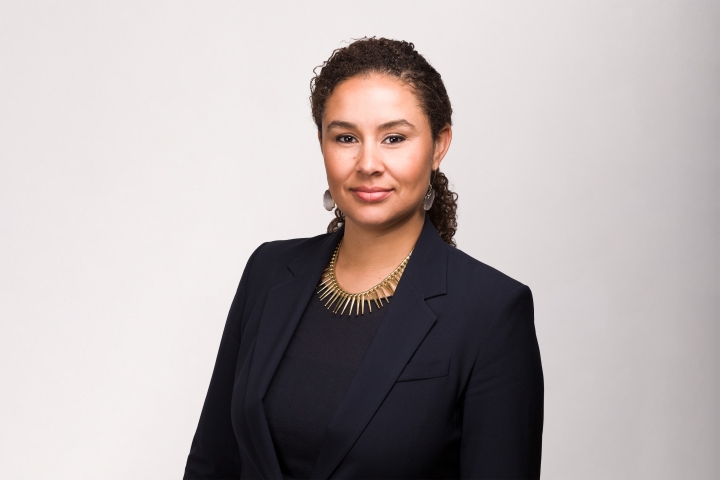 April Salas will serve as interim executive director of the Arthur L. Irving Institute for Energy and Society. (Courtesy of Tuck School of Business)
5/03/2022
More Reading

“The Irving Institute is the cornerstone of Dartmouth’s efforts to lead the energy revolution of the 21st century, and we are committed to its success,” says Kotz. “As the leader of the Revers Center, April Salas is already a dedicated partner with Irving and other energy stakeholders across campus, and her breadth of experience in government and the private sector make her ideally suited to lead the institute during this transition. I am grateful that she has agreed to take on this role.”

“The Arthur L. Irving Institute for Energy and Society is an interdisciplinary hub for activating the Dartmouth campus—and the world—around the advancement of an affordable, sustainable and reliable energy future for the benefit of society,” says Salas, who will also continue to direct the Revers Center. “As interim executive director, I am thrilled to work with the team to forge even stronger partnerships that accelerate this mission.”

Salas has nearly two decades of public and private sector leadership experience in energy finance, power markets and energy reliability, sustainability, and new technology integration. As the founding executive director of the Revers Center, Salas has grown the center into one of the most impactful and engaged business school energy centers in the world, with a strong student focus and a multitude of partnerships across the Dartmouth campus and the global climate, sustainability, and energy space. Salas also co-led the development of Tuck’s ESG (Environmental, Social, and Governance) Fund, its carbon offsetting program, and Tuck Currents, its energy finance podcast.

As a subject matter expert, Salas has directed projects at Tuck ranging from fuel alternatives, digital innovation, and renewables deployment. She co-teaches a North Africa-based course on energy innovation in frontier economies and lectures at Dartmouth on energy security, electricity, and consumer behavior and energy and society in the Middle East and North Africa. Most recently, she served as a co-principal investigator on a National Science Foundation grant assessing scale of real-time pricing and transactive energy platforms and presented at the International Energy Agency on the role of behavioral aspects in reaching net zero by 2050.

Prior to joining Tuck in 2016, Salas served as director of the White House Quadrennial Energy Review Task Force Secretariat under President Obama, leading 22 federal agencies and stakeholders across the energy industry to conduct a thorough analysis of U.S. energy systems that included more than 70 recommendations that were foundational to U.S. energy policy. Previously, she served in senior roles at the U.S. Department of Energy, including director of the State Energy Assurance Program and chief of planning and analysis for federal energy emergency response, where she worked with industry, state and local energy officials, public utility commissions, and state emergency management directors. Salas began her career in energy finance consulting, working on projects across Africa, Europe, and Latin America, and served in several roles at UNESCO and the Africa desk of the United Nations Headquarters’ Department of Peacekeeping Operations.

Salas has long volunteered in the community and serves as the inaugural chief sustainability officer for the town of Hanover. She was the founding chair of the Community Power Coalition of New Hampshire, a joint power agency which incorporated as New Hampshire’s second largest retail power provider under her leadership.

A graduate of the College of William and Mary, Salas went on to earn an MBA from Cornell University; a master’s degree in international affairs, conflict resolution, and civil society development from the American University in Paris; and a master’s degree in international security and economics with a focus on energy poverty and development from L’Institut Catholique de Paris. Salas has extensive board director experience with nonprofits, public and private companies, and growth-stage startups, including 3Degrees, Clean Energy New Hampshire, and Available Power.

Salas steps into the interim role as Irving Institute’s inaugural director, Elizabeth Wilson, returns to teaching and research as a member of the Dartmouth faculty.

“I want to thank Elizabeth for her vision and pioneering efforts to bring the work of the institute to life and increase our understanding of the challenges facing energy systems across different contexts, technologies, and geopolitical realities in a changing world,” Kotz says.

A national search for the new Irving director will be announced.

The Irving Institute—which in December officially moved into its new 55,000-square-foot home in the West End of campus—was created in 2016 to help advance an affordable, sustainable, and reliable energy future; develop the next generation of energy experts, leaders, and citizens; and transform human understanding of energy systems across technological, environmental, economic, geopolitical, and cultural perspectives. In its first five years, the Irving Institute has launched numerous curricular and co-curricular initiatives for students, awarded almost $1 million in research funding at Dartmouth, helped secure millions of dollars of student-engaged research funding at Dartmouth, and established partnerships at Dartmouth and around the world.

Description
Ella Bell Smith, a professor of business administration, talks in a podcast interview about getting feedback at work. “When you check the box, always let people know you checked the box,” she says.
Harvard Business Review
In the News