After two years on COVID hold, study abroad options include a pilot offering in Berlin. 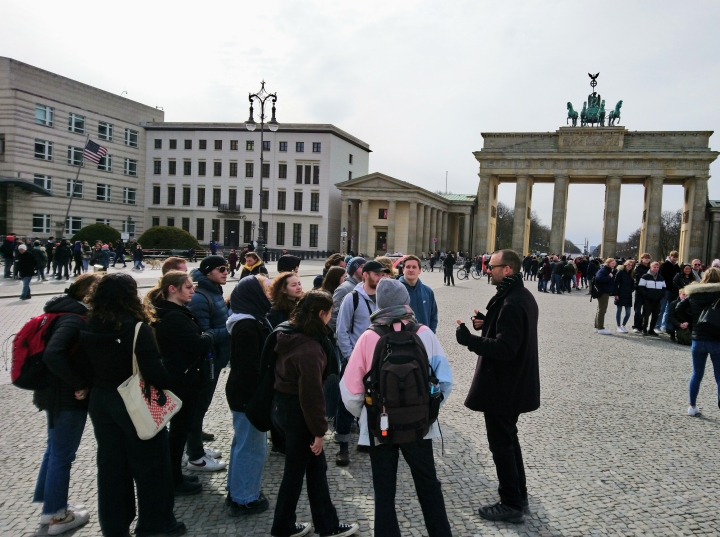 Students on the “Green City” foreign study program in Berlin—a combined German studies and engineering program—get a tour this spring near the Brandenburg Gate. (Photo by Claudio Schöneberger)
5/18/2022
More Reading

After six consecutive terms of a pandemic-related hiatus that began in March 2020, undergraduates are once again studying abroad through programs sponsored by the Frank J. Guarini Institute for International Education.

“Off-campus programs are a vital part of the Dartmouth experience for both students and faculty, and I’m very happy that the programs have been back up and running this year,” says Matthew Delmont, associate dean for interdisciplinary programs, who credits the institute’s executive director, John Tansey, and his staff for their “amazing job of making sure these programs run safely, smoothly, and successfully.”

Since fall, foreign study and language study abroad programs (FSPs and LSAs) as well as domestic off-campus programs have been running in Buenos Aires, London, Los Angeles, and Rome, among other locations, organized by more than a dozen academic departments. In total, 28 faculty-led programs are planned for this academic year, serving 388 students. All programs have site-specific COVID plans that include protocols for testing, isolation, and other operational support.

Faculty are continually innovating with off-campus programs to ensure they are relevant and responsive to the academic interests of Dartmouth students.

“This year was different because of COVID-19, and there has been a pent-up demand to be on campus, but students also want to have study abroad as part of their Dartmouth experience,” says Tansey. “Going forward, we expect to run 32 programs a year, plus exchange programs with universities around the world.”

This spring the Department of German Studies and Thayer School of Engineering have teamed up to offer “Green City, Sustainable Engineering and Full-Immersion German in Berlin”—a pilot program blending study in German language and culture with the opportunity to earn engineering credits. The first-of-its-kind program is co-led by Associate Professor of German Petra McGillen and Professor of Engineering Petra Bonfert-Taylor.

The Green City program is one example of how Dartmouth faculty have been collaborating on new interdisciplinary programs to complement the curriculum and build on traditional FSP and LSA offerings.

“Faculty are continually innovating with off-campus programs to ensure they are relevant and responsive to the academic interests of Dartmouth students,” Delmont says.

The push for the combined program in German and engineering came from the students themselves, McGillen and Bonfert-Taylor say.

“Engineering students often can’t go on foreign study programs because the major is packed with requirements, and to take a term without any engineering credits is really difficult,” says Bonfert-Taylor. “Students kept coming to me to ask, ‘Can’t you start a program that combines a foreign study experience with engineering?’ And the same students came to Petra McGillen to say, ‘We’re interested in German, but we need engineering credits, can’t you organize something?’ So we did some surveys and found that there’s a great need and desire for a program like this.”

In Berlin, students live with host families and have the choice of three out of four courses: a fast-track German language course, a course in German history and culture, and, for engineering credit, “Introduction to Environmental Engineering” and “Sustainable Urban Systems.”

They also participate in field trips and other enrichment activities that help showcase the importance of language and cultural understanding to effective engineering solutions. 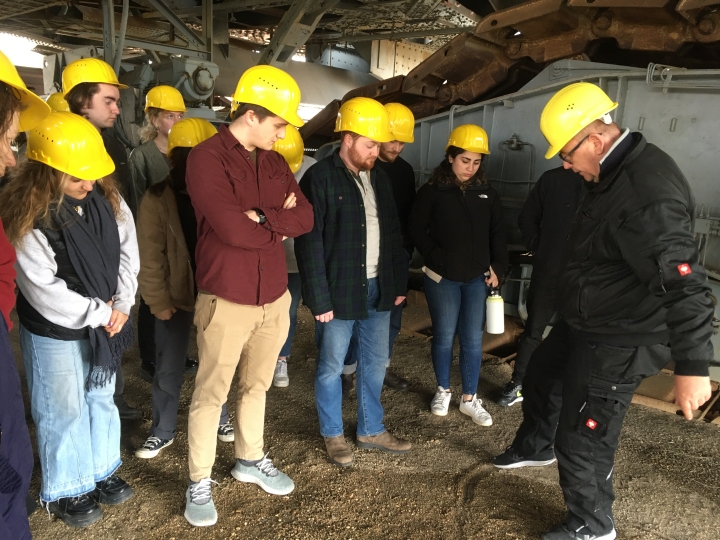 Students on the “Green City” FSP this spring tour a former lignite coal mining site in Germany and hear from the former operator of a giant excavator. (Photo by Petra McGillen)

On a day-trip to Görlitz—a town in the former East Germany, in a region shaped by lignite coal mining—students toured the surviving pre-World War II architecture and visited a remediated mine site, where they spoke with a former miner who had lost his livelihood in the transition to cleaner energy.

“Hearing our guide speak with so much nostalgia about his work was incredible,” program participant Stephen Veatch ’24 says of the experience. “It was so moving to see how people can feel left behind in the transition from one predominant energy source to alternatives.”

“It was one of those moments when German culture and political history and sustainable engineering topics came together in this really eye-opening way,” McGillen says. “The students immediately understood that in any energy transition you need to be aware of the profound social implications and find ways to mitigate them.”

Other off-campus programs have been adapting both to the realities of the pandemic and to student needs, Tansey says. For example, language programs that in the past had been geared to a single level of instruction have been experimenting with offering multiple levels. 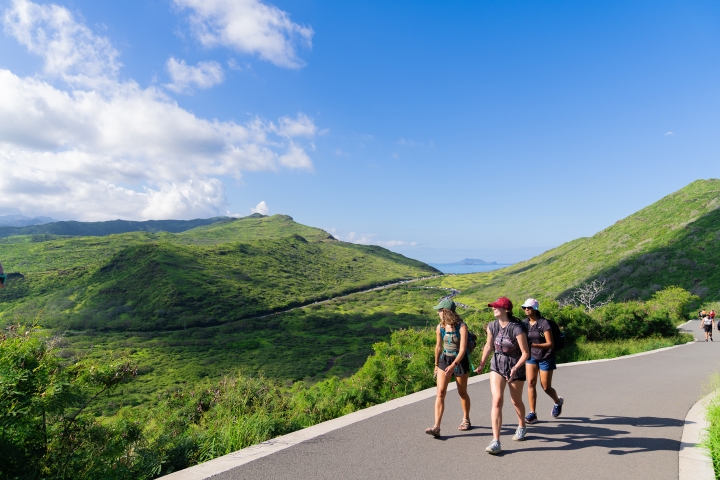 From left, Sarah Karnes ’23, Julia Vold ’23, and Aditi Gupta ’23 walk along the Makapu’u Point Lighthouse Trail in January while on the island of Oahu for a foreign study program. The linguistics and anthropology programs that normally are in New Zealand were in Hawaii this year because of COVID-19 protocols. (Photo by Julia Levine ’23)

And taking advantage of Dartmouth’s extended winter break, or “winterim,” the Guarini Institute is working to develop several new, shorter programs, often in conjunction with fall-term courses on campus.

For example, in the coming year, students in the Asian Societies, Cultures, and Languages course “Developing Vietnam” will spend winterim in Ho Chi Minh City on a program led by Associate Professor of History Edward Miller, for which they will receive an additional academic credit as part of their regular fall-term tuition.

The program is a partnership with Fulbright University Vietnam. During the fall the Dartmouth students will engage remotely with their peer counterparts in Vietnam. Once in-country, both groups of students will collaborate in-person on a joint field research project.

Likewise, Associate Professor of German Studies Veronica Fuechtner and Eli M. Black Distinguished Professor of Jewish Studies Susannah Heschel are offering a new Berlin-based winterim course on Migration and Memory—described on the program website as “an intensive immersion in the history of Jews in Berlin’s vibrant intellectual, cultural and political life from the late 18th century to the present.”

As with “Developing Vietnam,” participants will earn a fall-term academic credit.