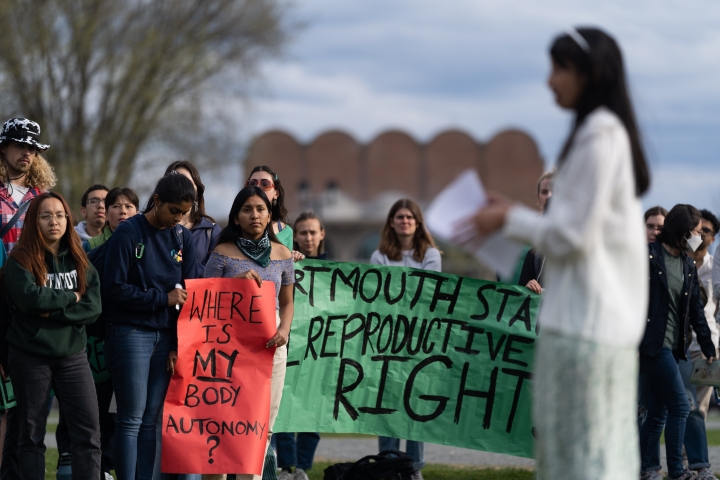 The leak last week of a draft Supreme Court majority opinion to overrule Roe v. Wade, the landmark 1973 decision legalizing abortion, has prompted a wave of reaction across the country, including among the Dartmouth community.

Dozens of students and other abortion-rights supporters gathered on the Green Friday evening as advocates spoke in support of reproductive rights.

And Trustee Neal Katyal ’91, a former acting solicitor general who clerked for Justice Stephen Breyer, wrote in a May 3 opinion piece in The Washington Post, “Perhaps the only comfort one can take in this draft opinion is that it is a draft, meaning there is a chance that things might change before the official decision. But the odds of that are probably low, and this opinion, should it become law, would profoundly alter the rights Americans hold dear, and not just on abortion.”

Katyal and many others, including President Joe Biden, argue that by rejecting the principle of the right to privacy that forms the basis of Roe and subsequent court decisions, the draft undermines the broad guarantees protecting decisions related to a range of personal choices including child rearing, contraception, marriage equality, and other life decisions.

In the leaked draft opinion Justice Samuel Alito Jr. wrote that nothing in the text of the Constitution supports a right to abortion and says that it is up to the states to regulate access.

“It is time to heed the Constitution and return the issue of abortion to the people’s elected representatives,” he writes.

Many state legislatures across the country have already enacted or are putting forward legislation modeled on a Mississippi law that bans abortions after 15 weeks with very few exceptions. It was the challenge to that Mississippi law, Dobbs v. Jackson Women’s Health Organization, that brought the question of Roe v. Wade to the Supreme Court this session.

It has been widely reported that 13 states have “trigger laws” that will go into effect restricting abortions as soon as Roe is overturned. Many other states have initiated bills that would either restrict or protect abortion access.

Russell Muirhead, the Robert Clements Professor of Democracy and Politics and a Democratic state representative representing Hanover and Lyme, is not optimistic about the prospects of legislation protecting abortion access in New Hampshire.

In an email from Concord, where the legislature was in session last week, he wrote, “It should be noted though that New Hampshire passed its first abortion restriction last June, and we can anticipate that Republicans will restrict it further if the Supreme Court gives them permission to.”

This week, the U.S. Senate is also moving to bring a bill protecting access to abortion to the floor for a vote, but even members of the Democratic leadership have acknowledged that they do not have the 60 votes needed to overcome a Republican filibuster.

The Alito opinion was met with differing reactions from two Dartmouth alumni in the U.S. Senate.

North Dakota Republican Sen. John Hoeven ’79 embraced the prospect of a decision overturning Roe, with his office telling the Grand Forks Herald that he “remains committed to protecting the unborn” and that if the draft opinion reflects the final decision, “it would have his support.”

When asked by Dartmouth News, faculty also offered their reactions:

We all know that the leak is unprecedented. I don’t have any sense of who leaked it and why. What is distinctive here is that this may be the first time we see clearly that the power of the Supreme Court is to say what the Constitution means without that power actually being exercised yet.

Usually, the court announces its decision and opinion at the same time, exercising this power through the decision that is issued by the court. This is just a preliminary draft—and as Chief Justice John Roberts makes clear, not “a decision by the Court or the final position of any member on the issues in the case.”

Yet, we can see what the impact of a possible decision overturning Roe would be, that is, we see that the court’s power is the power to say what the Constitution means but that power has yet to be exercised in this particular case and may not be exercised until June.

Alito’s draft ruling overturning Roe v. Wade cites Ruth Bader Ginsburg’s long-standing critiques of Roe to provide legal cover for what is at best, a highly political and legally shaky decision. Ginsburg argued that Roe would have been on more solid ground legally if it had been decided on the basis of the 14th Amendment’s guarantee of equal treatment under the law for all citizens rather than on the basis of its guarantee of privacy. But Ginsburg was not arguing for Roe to be overturned. She was trying to shore up rights she believed were essential to women’s freedom, arguing that any government attempt to restrict women’s full freedom of reproductive choice made women second-class citizens.

Alito tries to hide behind the most famous civil rights decision of the 20th century–1954’s Brown v. Board of Education. He cites Brown as a shining example of the necessity of overturning long-standing, immoral precedents and argues that overturning Roe is the modern equivalent of Brown striking down the 1896 Plessy v. Ferguson ruling that separating public facilities by race was constitutional as long as the facilities were equal. But Brown conferred rights; overturning Roe strips them. As women legal scholars of color immediately pointed out: this is nobody’s Brown decision. It is Plessy for women.

Alito’s attempts to hide behind a beloved liberal feminist justice and behind the court decision that jump-started the 1950s civil rights movement is not only a cynical ploy to delegitimize the mass protests he knew would follow. Alito argues that there is no right to privacy guaranteed in the 14th Amendment and that it is unconstitutional for the court to confer rights that were not “deeply rooted” in U.S. history. His goal is to weaken the 14th Amendment as a font of civil rights. When the Constitution was written, a majority of Black people in the U.S. were enslaved and women did not have the right to vote. The 14th Amendment was an attempt to redress serious inequities. Civil rights attorneys have turned to it for that purpose for 155 years. Attempts to constrain the power of the 14th should send a chill down everyone’s spines because it is the necessary first step to stripping rights from any group the court chooses to target.

If Roe vs. Wade is overturned, there certainly will be ripple effects felt in the labor market. It is likely that women’s employment and work hours will decrease, as the gendered division of labor in the family reinforce women’s roles as care providers. We only have to look back to the early days of the pandemic for a clear example of how school and day care closures increased family caregiving needs and reduced mother’s work hours more than fathers. These factors contribute to overall lower female earnings and increase the gender wage gap.

But the effects will be centered on women with low incomes, minority women, and single mothers who live in states with trigger laws as the costs associated with out-of-state travel or taking unpaid time off from work will be too high, resulting in more childbirth among these populations. These are the same women who lack workplace policies that facilitate the combination of work and family. I expect we will see an increase in inequality.

The United States is the only advanced country that does not have a paid parental leave policy, nor do we have a national paid sick leave program. It is still tricky to maintain breastfeeding when back to work as private places to pump at work are still hard to come by. We even lack protections against pregnancy discrimination at work. If Roe is overturned, the lack of support for women as they navigate balancing work and family will likely lead to fewer women in the labor force, just as employers are desperately searching to hire new workers.