The award-winning astrophysicist received an honorary degree from Dartmouth during commencement. 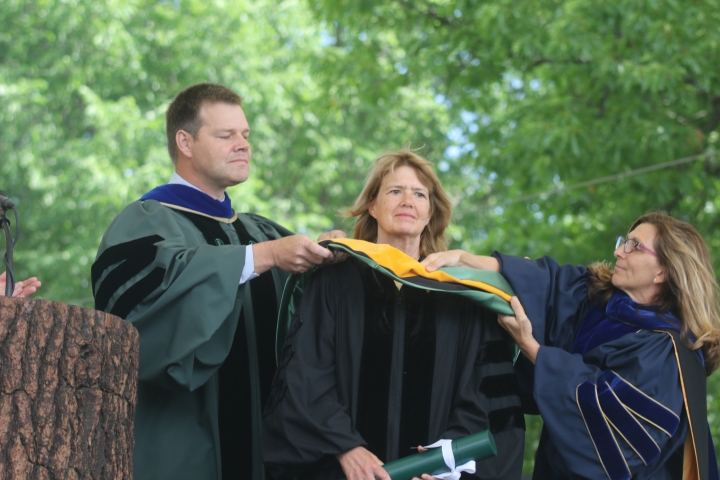 FIONA A. HARRISON, as an award-winning astrophysicist and distinguished teacher-scholar, your pathbreaking work has led to dramatic and revealing images that are significantly advancing human understanding of the evolution of our galaxy.

A self-described “under-confident undergraduate” at Dartmouth in the 1980s, you developed a fascination with physics when a first-year physics course taught by Bruce Pipes sparked you to want to understand “the weird ways the universe works.” From that point forward, you never looked back and only looked up, asking questions and seeking answers to the mysteries of outer space.

In 2005, you were named Principal Investigator for NASA’s Nuclear Spectroscopic Telescope Array (NuSTAR) mission, deploying the first focusing telescope to view the universe in the high energy X-ray band. Launched precisely 10 years ago tomorrow, NuSTAR set out to better understand the dynamics of black holes, exploding stars and other cosmic phenomena. With unprecedented sensitivity and spectral and imaging resolution, its findings were revelatory.

Only the second woman ever to lead a NASA mission, you’ve helped to set the agenda for U.S.-based astronomy and astrophysics research, and your distinguished career has served as an inspiration to women in science everywhere. You are a constant source of encouragement for your colleagues at Caltech, and your leadership and mentorship of students in pushing the frontiers of knowledge are creating an entirely new generation of trailblazers in your field.

For your innovation and collaboration in developing new instrumentation to better understand the universe, for your keen observational work in the high energy space, and for your exceptional contributions to education and new knowledge creation, Dartmouth is proud to award you the honorary degree of Doctor of Science.