On a Mission for Mental Health 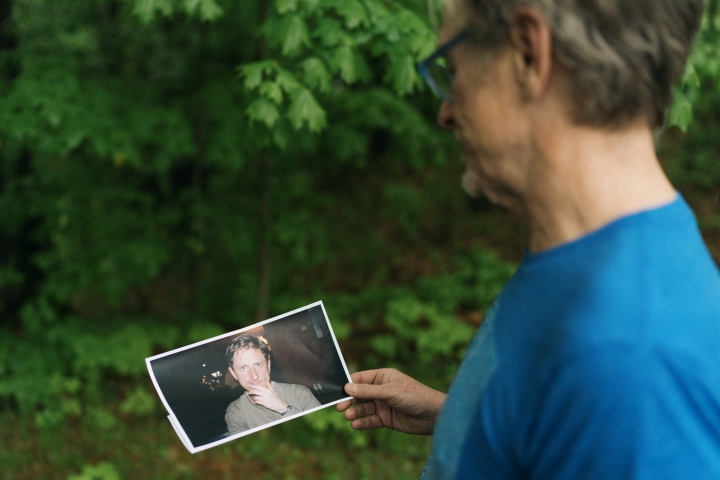 As kids sharing a bedroom in Coventry, England, Andrew Campbell and his younger brother, Ed, were close but competitive. Andrew was older by 16 months but often in Ed’s shadow.

A national-level gymnast, Ed was more athletic, and he was a higher academic achiever.

Campbell, the Albert Bradley 1915 Third Century Professor, thinks about his brother every day in his research on computer science and mental health. Ed suffered his first depressive episode as a first-year student at Durham University in the early 1980s. He battled bipolar disorder his entire adult life and died by suicide in 2009, at age 48.

“The story about how I got involved in student health all goes back to my brother,” Campbell says.

Ed’s family was blindsided by his death. After that, computer science was no longer just an academic interest to his older brother. For Campbell, who earned a PhD at Lancaster University in 1996 and came to Dartmouth in 2006, it became a tool to help those with mental health issues.

As a professor teaching computer programming and networks before Ed’s death, Campbell was already aware of the emotional patterns of the academic cycle. He would see students start each term excited and engaged. Stress would rise as schedules got busier. Attention would wane and sleep would suffer. Midterms would come and go. Attendance would ebb and flow. And then finals.

Campbell thought obsessively about mental health after his brother’s death. “I started looking around at Dartmouth,” he says. “It’s a bit of a pressure cooker because it is academically challenging. I’ve seen kids. I’ve dealt with kids. I wanted to start to get under the hood of that.”

There’s a lot of people on this campus who really care.

Emotional strain seemed to be an integral part of the university experience for students. Campbell began to dig deeply to see what he could find out. He spoke to fellow researchers, student deans, and the local chapter of Active Minds, a student organization that focuses on mental health. He also spoke with Dick’s House medical personnel. “That was revelatory,” he says. “They were having queues of people before midterms. The key points in the terms, they knew about because they were super busy.”

According to Campbell, his Dartmouth colleagues were eager to deal with mental health issues. There was a wealth of data, but information wasn’t integrated. It seemed that no one had the full picture.

“They are amazing people,” Campbell says, but in 2009 mental health issues were not as widely talked about. “Institutions like Dartmouth care about mental health, but it’s all about resources and where the student body is. It was stigmatized. People didn’t talk about it.”

With Apple’s iPhone having been introduced in 2007 and smartphones growing in popularity, Campbell began looking for ways to connect the technology with mental health. Passive sensing—using a phone’s light, sound, and movement sensors to infer human behavior such as sleep patterns, phone usage, locations visited, and social interaction—would allow him to turn Ed’s death into hope and life for others.

“I appreciate that I am a technologist, not a clinician, not a psychologist,” Campbell says, but he was driven by the potential of using technology to help people. He submitted a proposal to the National Science Foundation to study passive sensing. It was rejected.

Inspired by Tanzeem Choudhury—a computer science colleague at Dartmouth at the time—Campbell found funding to develop a smartphone app that could collect data to see if digital patterns could be used to analyze human behavior. In 2007, CenceMe was born. It was the first app that did behavioral sensing and that used machine learning. In 2008, the program was one of the earliest apps released on Apple’s App Store. The tool would evolve over time and eventually become known as StudentLife. 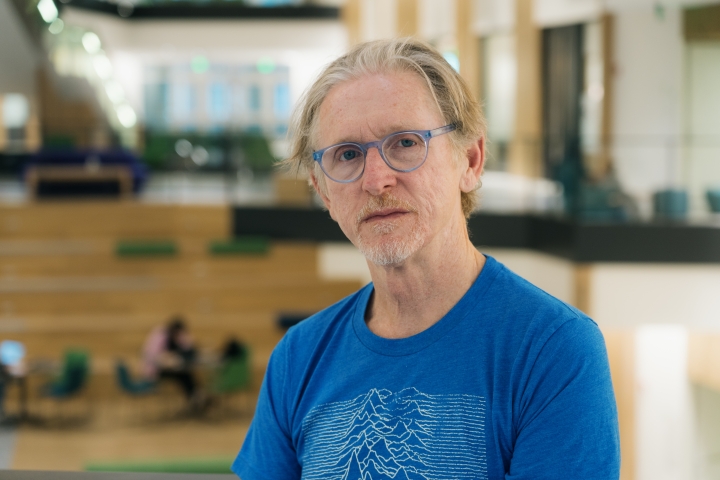 Andrew Campbell in the Class of 1982 Engineering and Computer Science Center. (Photo by Eli Burakian ’00)

In 2013, Campbell used the app to conduct the first study on the connections between passive sensing and human behavior. “I was a computer scientist getting into an area that I didn’t know anything about, which is trying to understand a population,” he says. Early results confirmed his observations as a classroom professor. There was indeed a verifiable emotional pattern to the academic term. The app also saw these trends. A year later, his first paper on the topic was published.

The 2014 paper found that sensing data from student smartphones aligned with measures of academic performance and mental health such as grades and levels of stress, loneliness and depression. Researchers and funders, including the National Institutes of Health began to take notice.

A second study in 2016 used wearable devices to look for signs of depression in outpatients of a New York hospital. For Campbell, then came a period as a visiting research scientist at Google and Verily, Alphabet’s life sciences research company, to see if he could get big tech interested in mental health sensing. At Verily, Campbell worked on a mental health sensing app based on StudentLife and helped conduct the first nationwide study of depression using Android phones.

Campbell, who says that he has always been more interested in people than in technology, returned to campus in 2017 and continued to consult with Verily on the mental health project. He had experience building sensors that could gather phone data. He understood mental health issues on campus. His brother’s suicide was still driving him to press forward.

Building on the successes of his early research, Campbell designed a four-year study with researchers in the Department of Computer Science and the Department of Psychological and Brain Sciences. The project set out to find whether smartphone data could uncover signs of anxiety and depression, and if the information could be used to predict student mental health. With the cooperation of more than 200 volunteer students, Campbell began using the app to gauge the mental health of students for their entire undergraduate careers.

The first studies showed that the sensors were working. Data on phone usage, physical activity, and sleep were aligning with self-reported feelings on emotional well-being.

With the outbreak of COVID-19, the StudentLife app was already embedded within the smartphones of undergraduates whose lives were being turned upside down. Campus was closed. Friends were scattered. Classes went remote. In students’ hometowns around the world, COVID-19 was killing people.

Each of the studies since the pandemic has shown the emotional toll of COVID-19 on student mental health. Depression, anxiety, and stress have all increased since early 2020. The most recent paper found that COVID-19 is revealing a deep divide in the mental health of college students, with some having much more difficulty with their emotional well-being during the pandemic than others.

“The pandemic has put students on a literal mental health roller coaster, mostly heading downward,” Campbell said when the research was released.

Since first developing the app technology in 2007, Campbell and the research team have published 30 academic papers, and they have inspired other computer scientists to focus on mental health. From a technical field that didn’t exist at the time of his brother’s death, Campbell says that there are now hundreds of research programs using passive sensing to study mental health. He takes satisfaction at creating a subfield that has grown so robustly over the years. But he recognizes that there is more work to do, especially having industry play its role to transform mental health.

Campbell is also struck by the fact that Ed’s illness is driving what he is now doing in his professional life. “It gives me a great amount of joy and satisfaction that I can move that forward,” he says. “It has brought an incredible amount of joy to my life. In an odd way, probably from the lowest, saddest point in my life to the highest, joyous professional peak.”

Campbell credits his Dartmouth experience with his ability to conduct research that can improve people’s lives. He welcomes being able to walk across campus to get answers to technical questions. There’s also Dartmouth’s interdisciplinary character, the deep level of interest among talented colleagues, academic freedom, and a growing culture of commitment toward mental health. 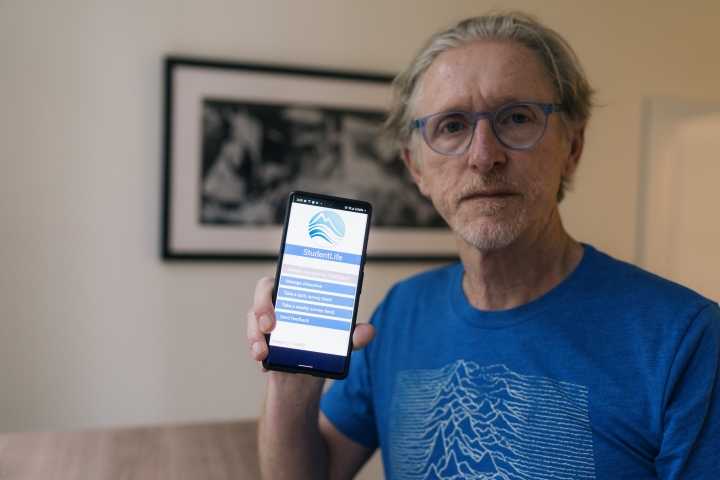 Andrew Campbell and his StudentLife app. (Photo by Eli Burakian ’00)

“There’s a lot of people on this campus who really care,” Campbell says. He is heartened that Dartmouth has partnered with JED Foundation to help the institution provide programs and services that support student mental health. According to Campbell, Dartmouth is a leader in tech and mental health, and could build on its work by integrating campus resources with research projects such as StudentLife.

As his work advances, and with most of the StudentLife volunteers preparing to graduate this month, Campbell says he would like to have his research move from passive sensing to active engagement. He believes that the technology can not only identify and predict mental health issues in students, but it can also recommend interventions.

With years of research behind him, Campbell understands the reservations that people harbor about such issues as privacy and trust. He is asked about this every time he gives a public talk. He believes it is a critical issue that needs to get solved, ideally in a way that would help students who wouldn’t ordinarily seek mental health care.

Campbell says that he would be satisfied if there was the ability to put “the technological equivalent” of a good friend on student’s phones. In the future, he believes the technology will have the ability to tailor itself to the acute needs of individuals and could recommend that students suffering through a mental health challenge could do relaxation exercises, connect with classmates or seek professional support. “A device that doesn’t just do behavioral sensing,” he explains, “but one that knows them.”

Ed didn’t have mental health services or a smartphone available to him when his first bout of depression came as a college freshman more than 40 years ago. “I don’t think Ed knew what was happening to him,” says Campbell of his brother’s early struggle with depression.

Campbell says that he has learned though his research that it is common for people to have their first depressive episode during their college-age years. For students, he says, searching out mental health care from a professional “can be like climbing Mount Everest.” He recognizes that there is also a culture of students not wanting to burden their friends. “These kids just have to be told that they are not alone and there is hope,” he says.

And he expects that technology will play an increasing role in fostering conversation and getting students the care they may need.

“It all comes back to thinking about ‘where are the Eds on campus today?’ ” says Campbell. “Where are they and how can we reach out to them?”

Any Dartmouth student experiencing a mental health crisis can call the Counseling Center at 603-646-9442.