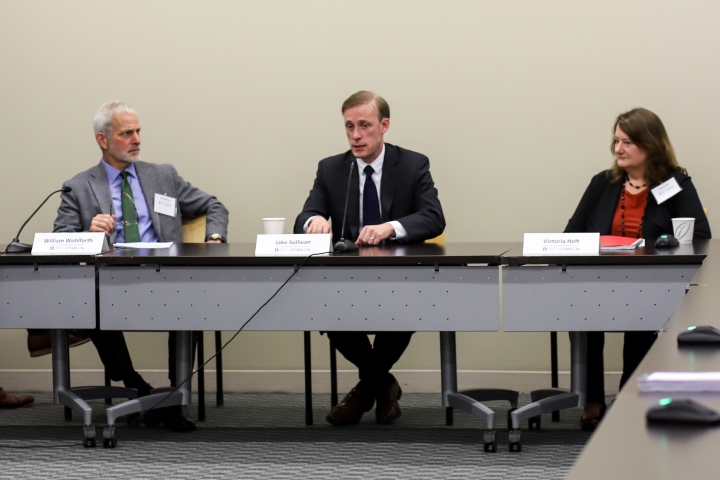 National Security Advisor Jake Sullivan opened the Dartmouth International Security Forum in Washington with a discussion of the Biden Administration’s strategic thinking on the Russia-Ukraine war and China’s posture toward Taiwan.

Sullivan, who held a teaching residency at the John Sloan Dickey Center for International Understanding from 2019 to 2020, joined some 60 top-level national security experts from the Biden administration, think tanks, and academia, many of them Dartmouth alumni, professors, or postdocs.

The May 12-13 forum was the first in what will become an annual international security conference hosted by the new Dartmouth Initiative for Global Security, dedicated to connecting Dartmouth researchers to the Washington and international policy community, says William Wohlforth, the faculty director of the initiative and Daniel Webster Professor at Dartmouth.

The two-day gathering opened with a reception and a conversation with top Pentagon official Colin Kahl, undersecretary of defense for policy. The all-day forum on May 13, titled “International Grand Strategy and Policymaking: Options for the Biden Administration in a New Security Environment,” featured many high-level administration security experts including Assistant Secretary of State for the Bureau of Arms Control, Verification, and Compliance Mallory Stewart and Assistant Secretary of State for International Organization Affairs Michele Sison.

Blake McGill ’22, a government major and War and Peace Fellow who attended as a notetaker for the Dickey Center, says it was incredible to have a window into developing U.S. security policy as it is evolving, with top officials such as Sullivan, former U.S. Ambassador to Ukraine William Taylor, and Thomas Wright, National Security Council special assistant to the president.

“It was particularly interesting to see the panel on Russia and Ukraine,” McGill says. “The discussions were under the ‘Chatham House Rule,’ so current administration officials felt that they could be candid about the situation and share their thinking behind policy decisions because there’s no risk about attribution anywhere.”

The Chatham House Rule, named for the headquarters of the Royal Institute of International Affairs in London, allows conference attendees to use any information from a discussion, but without disclosing who made any particular comment, designed to allow open debate about public policy and diplomacy.

“Obviously Ambassador Taylor has a particular perspective having been inside of Ukraine, but it was just very striking because, in a lot of ways, his perspective differed from others on the same panel who were all studying this and watching the news and know it on a more intimate level than the average American does,” says McGill.

Sullivan’s arrival at the start of the all-day forum, along with his chief of staff and a Secret Service detail, energized the event, says McGill, who had met Sullivan when he was in residence at Dartmouth at a War and Peace event with former U.N. Ambassador Susan Rice, and at a West House dinner.

Victoria K. Holt, the Norman E. McCulloch Jr. Director of the Dickey Center, says the inaugural forum, as the Biden Administration is finalizing its national security strategy on Russia’s invasion of Ukraine, and developing policies toward China, U.S. alliances, and the United Nations system, came at a critical moment for global policy debate.

“I am delighted that senior U.S. officials came to give us their frank views and seek our expertise, leading to a fantastic dialogue at a challenging time. We know that mixing scholars and policymakers doesn’t always work, but this forum’s focus on critical issues succeeded and drove a lively and fruitful exchange,” Holt says.

Michael Beckley, an associate professor of political science at Tufts University and a 2012 postdoctoral fellow at the Dickey Center, was a panelist in the discussion of U.S.-China relations.

“The forum was the most important and intellectually stimulating event I’ve attended since before the pandemic,” Beckley says. “Top national security officials and leading scholars engaging in lively discussions on the most pressing issues with Dartmouth professors, fellows, students, and alumni—it doesn’t get any better than that.”

Tahlia Mullen ’22, a government and environmental studies major and a War and Peace Fellow who also attended as a notetaker for Dickey, says the event made her appreciate the real-world expertise of Dartmouth faculty.

“Seeing my professors—people who I had sat in class with—being engaged in these conversations with this really diverse cohort was a reminder to me of how our professors wear many hats. They’re teachers but then they’re also really in the mix in D.C.,” Mullen says.