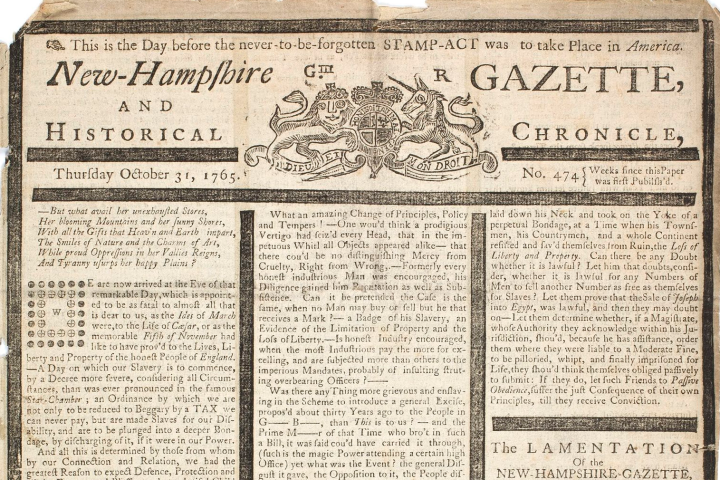 A copy of the New Hampshire Gazette following the announcement of the Stamp Act in 1765. The image is representative of the historical newspapers that the Dartmouth Library will help digitize thanks to a federal grant. (Photo from Wikimedia Commons)
8/17/2022
Body

Three Dartmouth projects received almost $700,000 in total funding from $31.5 million in humanities grants announced nationwide Tuesday by the National Endowment for the Humanities.

Barbara Will, the A. and R. Newbury Professor of English and vice provost for academic initiatives, called it “a remarkable achievement” that Dartmouth scholars were the recipients of three NEH grants, one of only a handful of institutions to win support for three or more projects out of the 226 that received humanities funding awards this round.

“All three of these project teams are fiercely invested in broadening access to academic and scholarly materials, and in bringing their expertise in each of these areas to a much broader public,” Will says. “I think that’s why the National Endowment for the Humanities thought these projects were so worthy of support.”

The New Hampshire Digital Newspaper Project will digitize 100,000 pages of significant historical newspapers published in New Hampshire from 1756 to 1963. The project will be led by Laura Braunstein, digital humanities librarian at Dartmouth Library; Jennifer Mullins,  digital lifecycle librarian; and Shaun Akhtar, metadata librarian for strategy and management, in partnership with the New Hampshire State Library, the New Hampshire Historical Society, and the University of New Hampshire Library. The project responds to the NEH’s “A More Perfect Union” initiative by focusing digitization efforts in this initial funding cycle on titles that foster scholarship and learning on justice, inclusion, and environmental sustainability.

In order to do so, the project will prioritize titles that illuminate New Hampshire’s contributions to the growth and sustenance of democratic institutions such as annual town meetings, and to the nascent environmental movement associated with the preservation of wilderness in the White Mountains.

Braunstein says the Dartmouth Library is excited to lead the effort to add titles from New Hampshire to the Chronicling America project of the Library of Congress.

“Like our project partners, we’re dedicated to responsible stewardship of cultural heritage and making it open access and freely accessible to all. We’re confident in our expertise to take on a digitization project of this scope, and looking forward to learning from our colleagues in New Hampshire and at the Library of Congress,” Braunstein says.

This project, a collaboration between Dartmouth and the University of Kentucky, undertakes a major enhancement of the Oral History Metadata Synchronizer, the pre-eminent digital platform for managing and indexing oral history archives. Drawing on the prior work of the Dartmouth Digital History Initiative, the project team will add advanced data annotation and “named entity recognition” functionality to the OHMS application.

The project team will also draw on the DDHI’s prior experience with data visualization to add mapping and timeline features to the OHMS viewer. The project will benefit archivists and curators who implement OHMS on digital oral history collections. It will also benefit the end users of oral history archives, who will have new digital tools for exploring and learning from these collections.

Miller, the DDHI director, says the grant will take the digital history initiative to the larger field of oral history scholars and users.

“By collaborating with the OHMS project at the University of Kentucky, we will make our data visualization tools available to archivists, museum curators, oral historians, students, and researchers. Our team can’t wait to get started,” Miller says.

This grant inaugurates a new research venture of the Media Ecology Project, a digital humanities lab at Dartmouth directed by Williams and John Bell. Building upon a recent special issue of Dartmouth’s Journal of e-Media Studies, the project will bring together a team of renowned international scholars and archivists who are committed to developing international studies of the U.S. Information Agency. This global scholarly team will schedule a series of monthly workshops to lay the groundwork to identify the opportunities to realize new humanistic research about the history and impact of USIA moving images and the paper trail about them, especially regarding select areas of the world: Latin America, East Asia, South Asia, the Middle East, Africa, and the U.S. itself. This one-year grant will culminate in an online symposium.

Williams says the grant provides an invaluable opportunity to delve into the archives of the USIA, “the film studio that none of us know: From 1953 to 1999, the USIA produced or distributed roughly 20,000 motion pictures throughout the world, though most all of this content was not available to be seen in the U.S.”

Will highlighted the work of the Grant Proposal Support Initiative in bringing the NEH funding to Dartmouth.

“I want to acknowledge how much Dartmouth is profiting from an absolutely extraordinary grant support office to help us achieve these successes,” says Will. “This year’s awards should certainly be recognized, and understood, in light of our stellar GrantGPS office.”