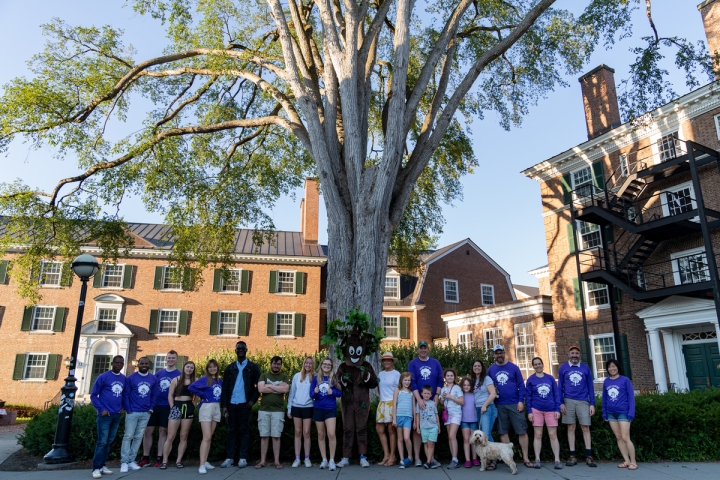 Members of West House gathered Wednesday for a barbecue sendoff for an old elm tree that was the symbol of their community. The tree was rotting and had Dutch elm disease. (Photo by Julia Levine ’23)
8/26/2022
More Reading

A century-old elm on the north side of Tuck Drive was cut down this week after years of efforts to save it from Dutch elm disease and rot.

The final blow came a little more than a month ago, when a huge limb came crashing down a short time after Facilities, Operations, and Management had used a crane to clear out all the visible dead wood from the canopy, says Tim McNamara ’78, associate director of FO&M. And some of the larger limbs have been cabled for a decade or more.

McNamara let members of West House know about the plan to remove the tree last week. West House members gathered Wednesday for a barbecue and sendoff for the elm that was chosen as the symbol for the community that occupies the dorms that surround the giant elm, Butterfield, Russell Sage, and Fahey & McLane.

House professor Ryan Hickox, chair of physics and astronomy, says, “We thought it was a good opportunity to build tradition for a house that is only 6 years old, to connect with the stately tree that was our original symbol and carry it forward, kind of like the lone pine.”

McNamara says the tree is probably at least 100 years old, but they will know exactly when the cross-section they cut from the base is polished and the rings are counted, likely sometime next week. Hickox said that in conversation with campus arborists, there was speculation that the tree could be one of the oldest documented elms in the state.

FO&M will present West House with the polished crosscut, aka a “cookie,” after the tree is dated, and the plan is to display the artifact as part of the house tradition. Hickox says the house will preserve some additional pieces which house members will incorporate into projects in conjunction with the wood shop.

Workers were removing the rest of the tree on Friday. A replacement tree may be planted at the site in 2023.

McNamara, who as an undergraduate lived in Russell Sage, beside the great tree, says a lot of people were sorry to see it go.

“We all go at some point. None of us are eternal.” 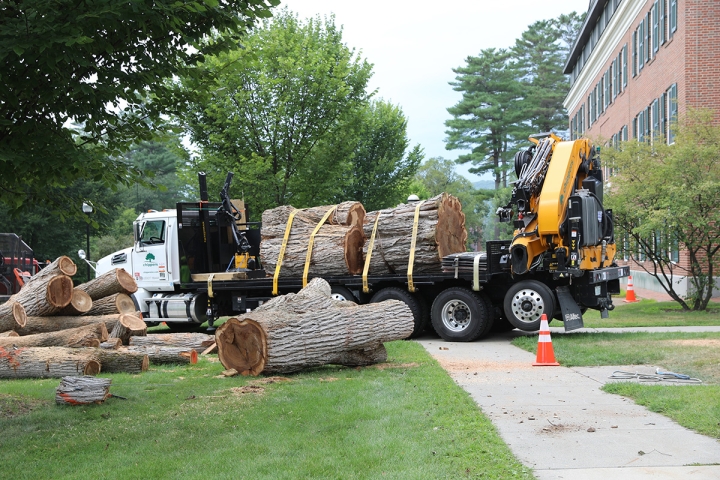 A tree company loads up sections of the elm on Friday. (Photo by Corinne Arndt Girouard)
Image 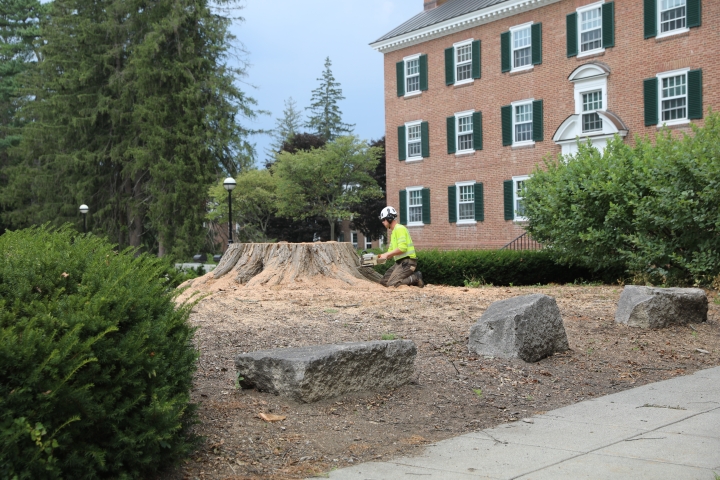 A contractor finishes work on the tree on Friday. (Photo by Corinne Arndt Girouard)
Photos