The work is part of Dartmouth’s transition to a noncombustion energy future. 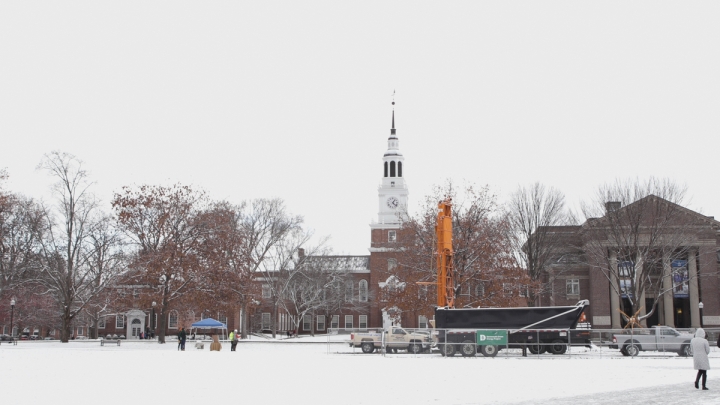 Dartmouth will drill test wells in four locations beginning next week to test each site’s viability as a future geothermal well field. The work is part of Dartmouth’s transition toward a noncombustion energy future, which includes eliminating the use of fuel oil to heat the campus’ almost 130 buildings.

The four well locations are:

Drilling on the Maynard site is scheduled to begin on Sept. 27 at 8 a.m. and run through 5 p.m. each day for approximately three days. The Scully-Fahey site will be the second drilling location, followed by the Thompson site, and then the Dewey lot location. In total, the drilling is expected to take a total of two to three weeks and will not be done on weekends.

Our geothermal investigation is an important part of our larger transition to renewable energy systems, which is going to shape the future of Dartmouth for the next 100 years in terms of how we are going to heat and cool our buildings.

Community members are invited to stop by the Maynard site on Sept. 27 from 9 a.m. to 1 p.m. to talk with Dartmouth staff about the project.

“Our geothermal investigation is an important part of our larger transition to renewable energy systems, which is going to shape the future of Dartmouth for the next 100 years in terms of how we are going to heat and cool our buildings,” says Julia Pfeiffer, program manager for Dartmouth’s energy infrastructure renewal.

Dartmouth currently uses a geothermal system to heat and cool the Fahey and McLane residence halls, with 13 wells that were installed near the building in 2007. The systems can be built under buildings or on open land. Once installed, they are below ground and the land on top of them can be used for other purposes—as home to buildings, playing fields, and parking lots.

Geothermal systems, also called geoexchange systems, are among the thermal energy system technologies that Dartmouth is investigating. Other energy projects include improving energy efficiency by upgrading aging buildings and infrastructure, exploring large-scale solar projects, and continuing the transition from steam heating to more efficient hot-water heating. The energy transition is the foundation of Dartmouth’s plan to significantly reduce greenhouse gas emissions, which as of 2020 have declined 27% from 2010 levels. The institutional goal is a 50% reduction by 2025.

The geothermal drilling will look like drilling for a typical residential water well and also resemble the geothermal test well Dartmouth dug on the Green in 2019. The results of that test well showed that the land under the Green could work for ground source heating and cooling.

Installation of geothermal well fields—which could each have hundreds of wells, about 6 inches in diameter, and from 200 to 800 feet deep—is likely six months to a year off, says Pfeiffer. After the holes are drilled, there will be a series of tests done to investigate properties such as flow, temperature, and geology.

Geoexchange systems, which extract thermal energy from the ground, are typically paired with heat pumps that provide heating or cooling for temperature control in buildings. Heat pumps use electricity to provide heating or cooling and can be entirely noncombustion if the electricity is derived from renewable sources such as solar, wind, and hydroelectric technologies.

The technology is practical and sensible, recalling the use of root cellars to draw cooling and warmth from the ground, says Rosi Kerr, director of sustainability.

“This process is both innovative and, in its simplicity, a return to our roots,” she says.