The award celebrates the field of “click chemistry,” a name Sharpless coined. 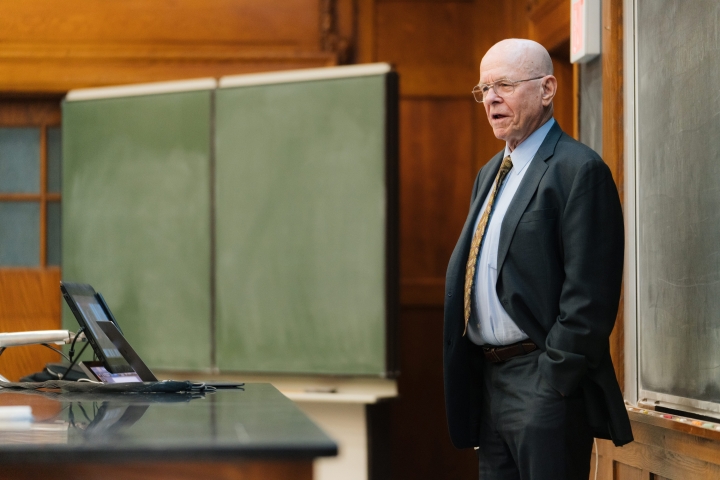 Chemist K. Barry Sharpless ’63 has joined an elite club: Already a Nobel laureate, the Dartmouth alumnus has received a second nod from the Royal Swedish Academy of Sciences—this time for pioneering the field of “click chemistry,” a term Sharpless coined in 2000. He is only the fifth scientist in history to receive the Nobel Prize twice.

Sharpless, the W.M. Keck Professor of Chemistry at the Scripps Research Institute in La Jolla, Calif., will share the award of 10 million Swedish kronor—about $900,000—with Carolyn Bertozzi, from Stanford, and Morten Meldal, of the University of Copenhagen.

“This is a proud day for science and for Dartmouth as Barry Sharpless is recognized for work that is, among other things, transforming how researchers develop potentially life-saving pharmaceuticals,” says President Philip J. Hanlon ’77.

Click chemistry describes how “molecular building blocks snap together quickly and efficiently,” without producing excess byproducts, according to the Royal Academy press release. Soon after Sharpless came up with the idea, he was able to apply it to a new chemical reaction, known as copper-catalyzed azide-alkyne cycloaddition, which the Academy calls “the crown jewel of click chemistry.” At the same time, Meldel independently presented the same reaction. Meanwhile, Bertozzi was developing bioorthogonal reactions—click reactions that work inside living organisms. Among other applications, these reactions are now being used to create targeted cancer treatments.

“When this reaction was discovered, it was like opening the floodgates,” said Nobel Committee for Chemistry member Olof Ramström, according to The New York Times. “We were using it everywhere, to build everything.”

Sharpless received his first chemistry Nobel in 2001, for his work on chirally catalyzed oxidation reactions which made possible the selective synthesis of molecules that are mirror images of each other but potentially have very different properties.

This is a proud day for science and for Dartmouth as Barry Sharpless is recognized for work that is, among other things, transforming how researchers develop potentially life-saving pharmaceuticals.

“Barry Sharpless has the type of unconventional intellect—which Dartmouth’s liberal arts model is particularly good at nurturing—that can ‘click’ seemingly disparate pieces of data into a coherent unity,” says Provost David Kotz ’86. “This award speaks to the power of education and of research to bring about the kinds of profound insights that can change the world.”

Sharpless came to Dartmouth set on a career in medicine.

“But Dartmouth educated me to the bigger world, broadly—all different fields,” he recalled in an interview for Dartmouth recorded in 2004. “The unique nature of the chemistry department at Dartmouth just captured my imagination, gave me a chance to taste what it’s like to do research, and at the last, 11th hour, I switched from medical school at Dartmouth, which I had already interviewed for, and I was off to Stanford for a PhD in chemistry. I never turned back.”

That “taste” of research may have been literal, at least according to the honorary degree citation Sharpless received from then-President James Freedman in September 1995, when Sharpless delivered the keynote address at Dartmouth’s convocation. The citation begins: “As an undergraduate at Dartmouth, it was your love of the pure smells of organic chemicals that led you to an eminent career in organic chemistry.” 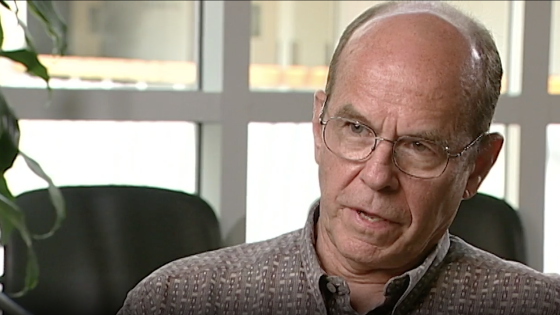 Remote video URL
K. Barry Sharpless ’63 reflects on his time at Dartmouth during a 2004 interview. (Video by Mike Murray)

After his graduate work at Stanford, Sharpless spent two decades teaching at MIT before joining the faculty at Scripps. But he never forgot his Dartmouth roots, which taught him “to dig deep,” he told Dartmouth News in 2019. “I couldn’t have had a better science education, but it was the liberal arts that made me really want to be more of a human being.”

“He was in the first class I taught in the fall of 1960, when he was a sophomore and I was a greenhorn directly out of graduate school,” Spencer says. “He was extremely energetic, and had lots of interests, not necessarily related to anything academic. He loved deep-sea fishing, and even after a year of graduate school had to be persuaded to continue studying chemistry, rather than going off to become a fishing captain.”

Spencer says the work for which Sharpless won his first Nobel Prize “opened a whole new perspective in the pharmaceutical industry, and it really had a profound effect in chemistry. Then he got another bee in his bonnet” for what would become click chemistry.

“In chemistry, it’s common that you put the ingredients together and end up with quite a mess,” Spencer says. “What Barry was after was something that would give you a very clean, almost quantitative reaction. It took years. But Barry is by no means finished with click chemistry. He continues to make discoveries.”

Ivan Aprahamian, professor and chair of the Department of Chemistry, says click chemistry uses “efficient reactions, under mild conditions, to bring two different molecules together by ‘clicking’ them one to the other, as one does with a seat belt.”

Aprahamian first met Sharpless at a talk at Hebrew University, where Aprahamian was a graduate student. “His talk focused on the asymmetric oxidation reactions he received his first Nobel for,” he says. “I was very impressed by the talk and the fact that he was able to go over what felt like 100 transparency slides in an hour.”

They met again at Dartmouth in 2009 when Sharpless visited the chemistry department as the Camile and Henry Dreyfus Lecturer. “I was a newly minted assistant professor and during my one-on-one conversation with him he was very supportive of my research direction and gave me very valuable advice about research and academia,” Aprahamian says.

Adding her congratulations, Dean of the Faculty of Arts and Sciences Elizabeth Smith calls Sharpless’ work on click chemistry “revolutionary,” noting the many “transformative applications on the horizon,” including for the development of targeted cancer drugs, that his research is enabling.

“Dr. Sharpless’ legacy of boundary-pushing research that serves the greater good exemplifies the value of a liberal arts education,” Smith says. “We are deeply fortunate that he will serve as an inspiration to fellow Dartmouth alumni, students, and faculty for decades to come.”

With Sharpless’ latest win, Dartmouth alumni can count three Nobel laureates—with a total of four Nobel Prizes among them—in their ranks. In addition to Sharpless, geneticist George Snell, Class of 1926, received the 1980 award in medicine for his work on immunology, and physicist Owen Chamberlain ’41 received the physics prize in 1959 for discovering the antiproton.