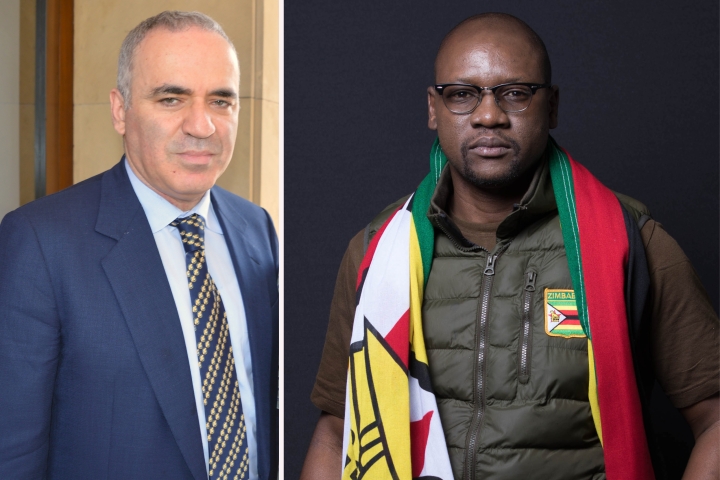 International chess champion and pro-democracy Russian dissident Garry Kasparov and human rights activist Evan Mawarire from Zimbabwe will hold a public discussion at Dartmouth on Oct. 20 about what it means to be a dissident today.

The event, “Voices of Dissent: A Conversation with Garry Kasparov and Evan Mawarire,” is hosted by the John Sloan Dickey Center for International Understanding and will be moderated by Victoria K. Holt, the Norman E. McCulloch Jr. Director of the Dickey Center.

“Dissent is critical for societies to function. Dissidents go to another level to speak for freedom and democracy despite the personal costs,” says Holt. “I’m delighted to host two prominent dissidents, Garry Kasparov of Russia and Evan Mawarire of Zimbabwe, at Dartmouth to share their experiences with us and for Dartmouth to host this conversation.”

Kasparov, a Russian chess grandmaster and former World Chess champion, is a writer and a pro-democracy activist. He was briefly a candidate for the Russian presidency in 2008 but withdrew from the race, and in 2013, after Vladmir Putin returned to the presidency, announced he had fled Russia in fear of persecution. In 2017, he founded the Renew Democracy Initiative, an American political organization promoting and defending liberal democracy in the U.S. and abroad.

Since the Russian invasion of Ukraine this year, the Renew Democracy Initiative has been campaigning to shore up support for Ukraine among Western democracies and has distributed $4 million in humanitarian aid to the country, The New York Times reported.

Mawarire is a pastor and democratic activist from Zimbabwe who was a leading figure in the 2016 Zimbabwe protests challenging the rule of Robert Mugabe’s government. He founded #ThisFlag, a grass-roots pro-democracy movement that has spread across Zimbabwe working in coalition with student, religious, and social organizations to promote civil society and political reform. Mawarire has been a frequent target of legal prosecution by the Mugabe government and, according to the Times, since his release from prison in July 2016, after a court ruled that the effort by the state to charge him with inciting public violence for his organizing activities was unconstitutional, he has received international recognition as a civil-society activist.

The event will be held in the grand ballroom of the Hanover Inn starting at 5 p.m. on Oct. 20. The discussion is free and open to the public and will be in-person only.