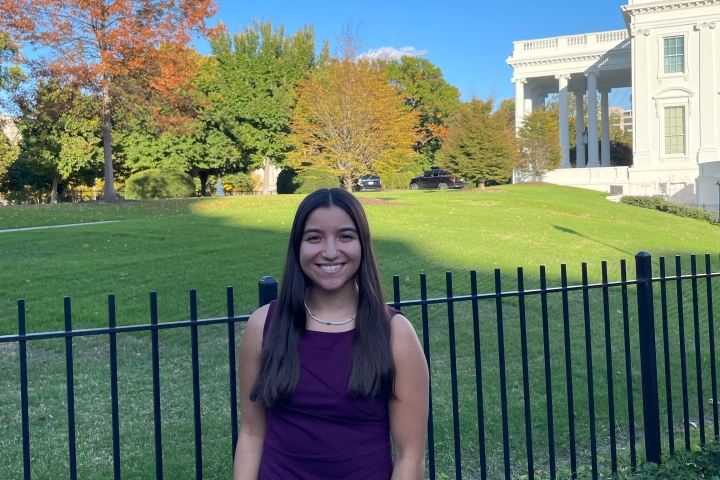 Jessica Chiriboga ’24 outside the White House, where she attended a meeting on Oct. 14 with Vice President Kamala Harris and other students from around the country. (Photo courtesy of Jessica Chiriboga)
10/17/2022
More Reading

Vice president of Dartmouth Student Government Jessica Chiriboga ’24 was in Washington, D.C., on Friday to represent Dartmouth at a student forum on reproductive freedom, hosted by Vice President Kamala Harris.

Seventy-five students from more than five dozen colleges and universities in 33 states met at the White House to discuss their concerns about how the U.S. Supreme Court’s June decision in Dobbs v. Jackson Women’s Health Organization is affecting young people, including undergraduates and medical students. The Dobbs decision struck down 50 years of jurisprudence protecting the right to abortion.

“I felt incredibly honored to represent the Dartmouth student body during Friday’s events with Vice President Kamala Harris and student leaders across the country,” Chiriboga says. “I was pleased to learn more about how students and universities can work together to guarantee safe and affordable reproductive health care for all.”

I care about this issue because, as (the poet) Audre Lorde once stated, we do not live single-issue lives.

According to a White House news release, Harris and the students “spoke about supporting survivors of sexual violence on college campuses and making it easier for individuals to receive health care free from stigma. The participants raised concerns about access to contraception on campus and the ability to travel out-of-state if necessary to receive reproductive care.”

For Chiriboga, reproductive rights are inextricably linked to other civil rights issues.

“I care about this issue because, as (the poet) Audre Lorde once stated, we do not live single-issue lives,” she says. “As student body vice president and an advocate for mental health and LGBTQ+ rights, I shared how this issue negatively impacts the mental health of many students and how LGBTQ+ people and people of color are disproportionately impacted. An issue that affects one of us, affects all of us.”

Of that meeting, President Hanlon says, “Vice President Harris was especially interested in two topics: How do we get students to lead on efforts to expand reproductive rights, and what implications will limits on reproductive rights have for medical education, including the choices that students will make in applying to medical and nursing schools and medical residencies. One of the ideas that arose in that conversation was that she should have a meeting directly with student leaders to discuss these topics.”

Following the August meeting, Harris invited Hanlon and the other presidents to nominate students to participate in the student summit.