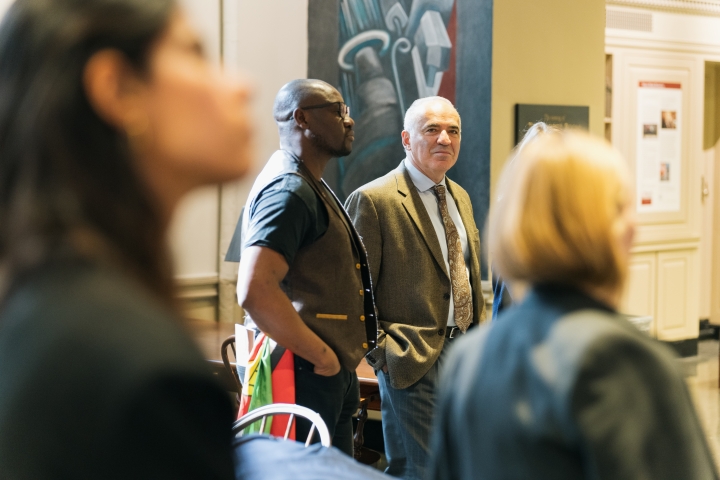 Two of the world’s most courageous activists for freedom brought gripping personal stories and a powerful message to about 300 people attending “Voices of Dissent,” a forum on Thursday presented in the Hanover Inn Grand Ballroom by the John Sloan Dickey Center for International Understanding.

Garry Kasparov, the Russian pro-democracy leader and world-renowned chess champion, joined Evan Mawarire, Zimbabwean pastor and founder of the #ThisFlag movement, which spurred peaceful protests leading to the resignation of Robert Mugabe, for a conversation moderated by Victoria Holt, the Norman E. McCollough Jr. Director of the Dickey Center.

“When I left professional chess back in 2005, the first question I was asked by journalists was whether I thought my chess skills could help me navigate the muddy waters of Russian politics and fight Putin’s regime,” Kasparov says in a short film that opened the forum. “Absolutely not. In chess, I always say, we have fixed rules and unpredictable results. Under Putin, Russia is exactly the opposite. But I had to take a stand.”

Jailed in 2007 for leading an anti-Putin rally in Moscow, again detained by police in 2012, and facing more imminent arrests, Kasparov now divides his time between the U.S. and Croatia. When his mother died on Christmas night in 2020 from COVID-19, he could not return to Russia, for fear of government retaliation. In an interview before the forum, Kasparov spoke about the heartbreak of not being by her side, at the end.

“That was a big personal drama, but I did what was right and that’s what she taught me, ” Kasparov said. “When I was a teenager, my mother put a poster over my bed saying, ‘If not you, who will?’ And when people ask me whether I’m concerned about personal safety, I say absolutely, I am. But what can I do? It’s a moral imperative.”

Through an organization he founded, the Renew Democracy Initiative, Kasparov is rallying support and sending humanitarian aid to Ukraine. Kasparov doubts that Putin will follow through on his threat to use nuclear weapons in that conflict, and he believes Ukraine will win the war, setting the stage for regime change in Russia.

“I believe that the liberation of Russia from Putin’s fascism will begin after the Ukraine flag is raised and Ukraine is liberated,” he said.

Mawarire is also hopeful that democracy will come to his homeland, though not, perhaps, in his lifetime.

“When people are not happy with a system of governance is, they advocate for something different,” he said at the forum. “And when they don’t get something different by pushing a government to change, they change that government through their vote, or in some cases, through a revolution. In Zimbabwe, it’s increasingly looking as if a revolution is going to be the way to go, because voting has brought no result.”

In chess, I always say, we have fixed rules and unpredictable results. Under Putin, Russia is exactly the opposite. But I had to take a stand.

Mawarire entered Zimbabwe’s political fray on April 20, 2016, when he posted on Facebook “This Flag,” a poetic video lashing out against government oppression and corruption. He and his wife had two children and another on the way, and he had spent the day trying to figure out how to make ends meet.

Following the screening of a film about him at the forum, he recalled that turning point. “I’m sitting in my office, I see the Zimbabwe flag, and the thought that came to me was, this flag is a lie. This beautiful flag. So I take my phone and I prop it up against my Bible and I just start to speak from my heart.” The post went viral, sparking a nationwide grassroots movement.

After being imprisoned and tortured in 2016, 2017, and 2019, and charged with treason, Mawarire fled to the United States. He and Kasparov work together to confront authoritarianism around the globe.

Both men warned that dissent is a bulwark of democracy that too many Americans take for granted.

“I get frustrated with people who live with freedom, who have lived with freedom all their lives, and pretend it’s worthless,” said Mawarire. “The fact that you can go out into the city square and criticize your government and immediately go off to the coffee shop and have a coffee and forget about that and go home and have a good night’s sleep—that’s something that I’ve dreamed of.”

Toward the end of the forum, Mawarire issued a challenge.

“The future does not depend and will never depend on people who are elected. It will always be decided by those who elect,” he said. “Even if you are the only one that decides to get involved in grassroots mobilization or in finding ways to defend the vote or to keep the conversation going about your democracy, even if you are the only one, it is worth it. It is a duty that must not be abandoned.” 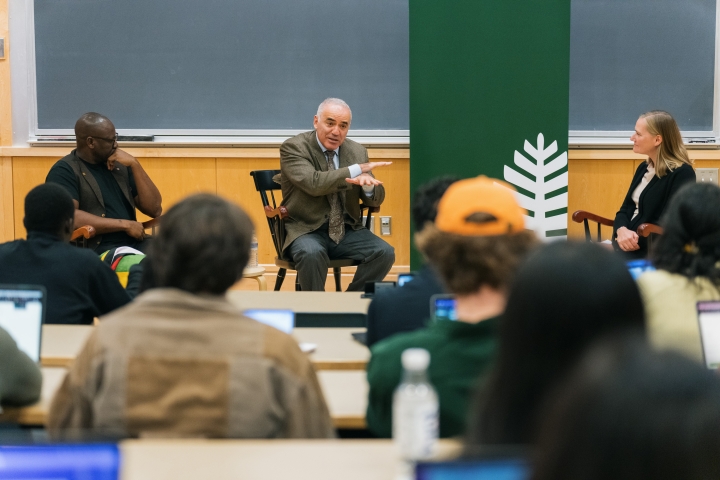 Garry Kasparov speaks during a session with students on Thursday organized by the John Sloan Dickey Center for International Understanding. Visiting Associate Professor of Government Martha Johnson, at right, brought her class to hear the discussion with Kasparov and Evan Mawarire, left. The two activists later spoke at a “Voices of Dissent” forum that day. (Photo by Eli Burakian ’00)

Tuna Akmehmet ’26 took that message to heart. “I’ve lived in Turkey and I have friends there who always make fun of Americans, saying, ‘Oh yes, it’s a beacon of democracy, so why don’t more people vote?” Akmehmet said he’s politically active and will urge his fellow students to cast their ballots next month.

Maria Trybus ’26, who comes from Poland, was pleased to hear Kasparov’s perspective on the strife in Ukraine. “I am really engaged in what’s going on with immigration in Poland, and I’ve created my own initiative to support Ukrainian refugees,” she said while standing in line for Kasparov’s autograph earlier in the day.

The “Voices of Dissent” project was initiated and supported in part by Matt Calkins ’94 who, with two other Dartmouth alumni, grew his highly successful software company, Appian, from a startup in his basement. Calkins says his passion for constructive disagreement took root at Dartmouth.

“Ideas were contested vigorously in my circle of friends. I loved that. And I came to believe that the test of a good idea was whether you could defend it. The process by which you reached the best idea was through conflict, through respectful, but vigorous conflict,” he said in an interview before the forum.

Calkins, who has launched several initiatives highlighting the importance of political dissent, sees Kasparov and Mawarire as powerful and courageous truthtellers.

“Garry consciously put at risk everything he had—his fame in his home country, his ability to be with his mother—he knew he could lose all that. Evan did not know at first what he might lose. He was just an irrepressibly authentic person who happened to be eloquent and compelling. They came from different directions, but in the end, they move in parallel because they stand for the same values: self-determination, freedom to speak your mind, freedom to say what other people don’t want you to say, and an idealism that elevates people, respecting them for the totality of their humanity.”