Control of Congress still in question, but Democrats avoid a “red wave.” 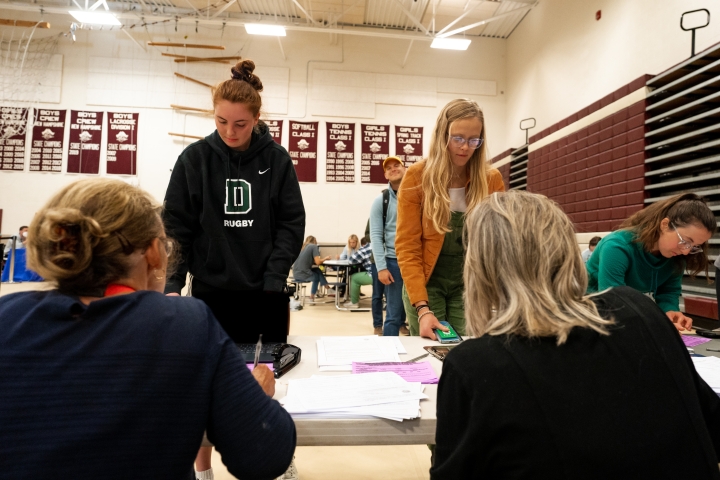 Dartmouth students register to vote at the polls at Hanover High School on Tuesday. (Photo by Julia Levine ’23)
11/09/2022
Body

Some key races are still up in the air, but Democrats appear to have avoided a major “red wave” from Republicans on Election Day in part because voters were willing to split the ticket and also balanced the problem of high inflation with the strong job market and social concerns, Dartmouth experts say.

The Supreme Court’s Dobbs decision striking down Roe v. Wade also appears to have driven Democratic turnout in some key areas from supporters of abortion rights.

New Hampshire was once again a bellwether on such fronts, with voters splitting the ticket to elect Republican Gov. Chris Sununu to a fourth term and Democrat Sen. Maggie Hassan defeating GOP challenger Don Bolduc to hold onto her Senate seat in a race hailed by Democrats across the country as critical to retaining a Senate majority.

Republicans appeared to be closing in on a majority in the House, but control of the Senate was still very much up for grabs Wednesday as the vote counts continued in several battleground states. But the wins by Hassan and Pappas, both seen as vulnerable in a midterm year, mirrored stronger-than-expected showings by Democrats across the country.

The New Hampshire Secretary of State’s Office reported that preliminary turnout numbers are near record levels for a midterm, in line with national trends. In Hanover, turnout at just over 5,600 ballots cast was just below the record 2018 midterm total.

There is not an official count of student voting, but the Hanover Town Clerk’s Office reported that they signed up 797 new voters at the polls Tuesday, and student turnout was steady all day with lines forming in the morning and later in the afternoon. All the Democratic candidates, including state Rep. Russ Muirhead, professor of government, won their contests in Hanover.

Here’s a roundup of analysis from Dartmouth professors:

Anderson says she was surprised that after many polls in the final run-up to the election showed that inflation and the economy topped the list of American’s concerns, many voters stuck with incumbents.

“I think everybody’s unhappy with inflation, but not necessarily with the person representing their district. Maybe there’s a realization that the economy and inflation are world-wide problems, and they’re not holding their own representative responsible,” Anderson says.

And she noted the distinction between the price of eggs and gas, and the job market.

“I’m not a political scientist, but as a labor economist I can say the labor market is very strong. When people talk about the economy they mean inflation, but the last jobs report showed unemployment at 3.7 percent. That’s historically low. Right now there are two openings for every job searcher. So maybe it’s less ‘it’s the economy, stupid,’ and more ‘it’s the labor market, stupid.’”

By late Wednesday morning, Harrington says she was still “feverishly updating the New York Times website” looking for news from a number of still-undecided races, particularly the Arizona, Nevada, and Georgia Senate races, which will ultimately determine which party controls the Senate.

But there were some bright spots, she says.

“I’m amazed and pleased that in all of the states where there were measures on the ballot to enshrine reproductive rights in the state constitution, those measures passed,” she says.

Michigan, California, and Vermont affirmed abortion rights in ballot measures and voters in Kentucky rejected an amendment that would have said there is no right to the procedure.

“In Kentucky, they elected anti-abortion officials, but they voted for reproductive rights,” she says. “I’ll take the win, but sometimes American politics are a dumpster fire wrapped in an enigma.”

Lacy sees what he calls candidate quality as a factor in the dissipation of the red wave.

“I think another thing to take from the election is that the candidates who denied the 2020 election results didn’t do as well as expected,” Lacy says.

And voters showed themselves willing to choose candidates based on their individual qualities and not strictly vote along partisan lines.

“I think New Hampshire was an early indicator that the wave would not come and of the willingness to split the vote. Voters went with an all-Democratic federal delegation while voting for Sununu, a moderate Republican, by large margins for governor, while the other Republicans in New Hampshire who were election deniers didn’t do so well,” he says.

While he also pointed to the phenomenon of vote splitting, the effects of abortion rights on turnout, and extremism among a number of Republican candidates as probable factors in the 2022 results, Nyhan cautioned that the count is not complete and social scientists will have to dig into the numbers to ultimately determine if the data backed up all the “hot takes” circulating the day after the election.

“It’s going to take a long time to determine who voted the way they did and why, and those questions are always hard to answer, even when we have the full set of data,” he says.

Nyhan also noted that the election process was relatively smooth and there were no significant reports of disruptions at polling places.

“As always, there were a lot of dubious claims circulating online during the day yesterday, but we haven’t seen a particular narrative take hold,” Nyhan says. “So far it’s pretty quiet, all things considered.”

Offering an optimistic note, Orleck says it appears more people were willing to let go of partisan loyalty when faced with some of the “not just extreme ideology, but just extreme weirdness” of some Republican candidates.

“That’s going to require some soul searching in the future for the Republican party,” she says.

The most positive takeaway for Orleck was that young people age 18 to 25 were engaged and voted in this midterm.

“Gen Z came out. Gen Z even elected a Democrat to Congress (25-year-old Maxwell Alejandro Frost) in the otherwise bright red state of Florida,” she says.

Some of the new techniques to get younger people out to vote—TikTok and other social media —are really having an impact, she says.

“They are the first generation of young people to vote in large numbers in a while. I think that has a lot of import for our political future,” she says.

“Gen Z is the X-factor in terms of the future of our politics and really interesting for 2024.”