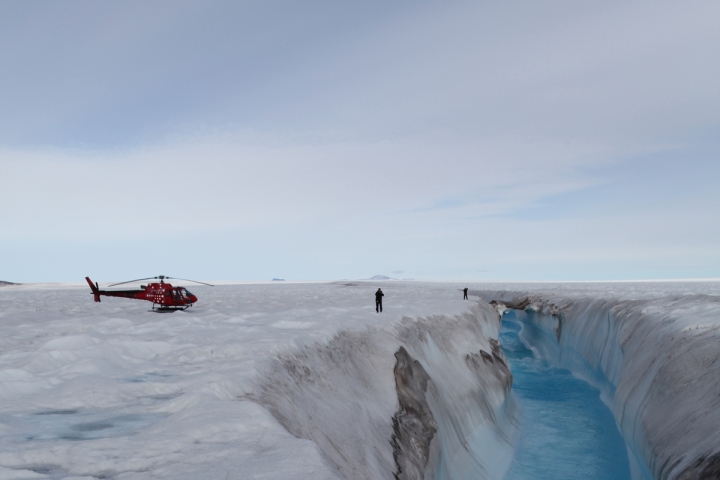 The loss of ice from Greenland’s largest basin is occurring much faster and could contribute up to six times more to global sea-level rise by 2100 than climate models currently project, according to a study led by Dartmouth professor Mathieu Morlighem with researchers from the Technical University of Denmark (DTU) and the University of California, Irvine.

The authors report Nov. 9 in the journal Nature that the Northeast Greenland Ice Stream, known as NEGIS, could add a half-inch or more of water to sea levels by the end of this century, which is equivalent to the entire Greenland ice sheet’s contribution during the past 50 years.

The study combined satellite data and numerical modeling with GPS data collected from the harsh interior of Greenland over the past decade. In 2012, the intrusion of warm ocean currents caused the floating extension of the NEGIS to collapse, which has accelerated ice flow and triggered a wave of rapid ice thinning that has spread upstream. The researchers found that this thinning stretches up to nearly 200 miles inland from the Greenland coast—and that other glaciers on Greenland may be suffering the same fate.

The Greenland ice sheet is not necessarily more unstable than we thought, but it may be more sensitive to changes happening around the coast.

“Many glaciers have been accelerating and thinning near the margin in recent decades—GPS data helped us detect how far inland these changes happening near the coast propagate,” said Morlighem, the Evans Family Distinguished Professor of Earth Sciences at Dartmouth. Morlighem led the development of the numerical models for the study that simulated the flow of ice from the interior of the ice sheet to the coast.

“The Greenland ice sheet is not necessarily more unstable than we thought, but it may be more sensitive to changes happening around the coast,” Morlighem said. “If this is correct, the contribution of ice dynamics to overall mass loss on Greenland will be larger than what current models suggest.”

The study hinges on data collected by a team led by first author Shfaqat Abbas Khan, a professor at DTU Space, using a network of GPS stations that stretch inland on the NEGIS to behind the Nioghalvfjerdsfjord Gletscher and Zachariae Isstrøm glaciers, one of Earth’s most hostile and remote terrains.

Morlighem and co-author Youngmin Choi, a former graduate student in Morlighem’s research group at UC Irvine who is now at NASA’s Jet Propulsion Laboratory in Pasadena, Calif., compared the GPS data to numerical models they developed to capture the dynamic response of the NEGIS after the collapse of the floating extension in 2012.

They tested their model against various friction laws until their results matched the data Khan’s team collected from the ice stream. Based on those results, Morlighem and Choi modeled its future dynamics and found that the NEGIS could lose six times more ice than existing climate models estimate.

The projected changes in surface elevation of the Northeast Greenland Ice Stream over the next 60 years, based on modeling by earth sciences professor Mathieu Morlighem and co-author Youngmin Choi, with red indicating the greatest thinning due to ice melt. (Courtesy of Mathieu Morlighem and Shfaqat Abbas Khan)

“We can see that the entire basin is thinning and the surface speed is accelerating,” Khan said. “Every year, the glaciers we’ve studied have retreated farther inland, and we predict that this will continue over the coming decades and centuries. Under present-day climate forcing, it is difficult to conceive how this retreat could stop.”

Though winter 2021 and summer 2022 were particularly cold, the NEGIS glaciers have kept retreating. Northeastern Greenland is an Arctic desert where precipitation is less than an inch per year in places, which means that the ice sheet is not regenerating enough to offset melt.

However, estimating how much ice is lost and how far into the ice sheet the process occurs is not easy, Khan said. The ice sheet’s interior — which moves less than 3 feet per year—is difficult to monitor, which limits the ability to make accurate projections.

Co-author Eric Rignot, professor of Earth system science at UC Irvine, said that as more precise observations of the change in ice velocity are included in models, it is likely that estimates of global sea-level rise — such as the 8-to-38 inches projected by the UN Intergovernmental Panel on Climate Change by 2100 — will need to be corrected upwards.

“We foresee profound changes in global sea levels, more than currently projected by existing models,” Rignot said. “Data collected in the vast interior of ice sheets, such as those described in our research, help us better represent the physical processes included in numerical models and in turn provide more realistic projections of global sea-level rise.”

Tore Vind Jensen at Technical University of Denmark contributed to this story.