A ceremony was held Tuesday in Filene Auditorium. 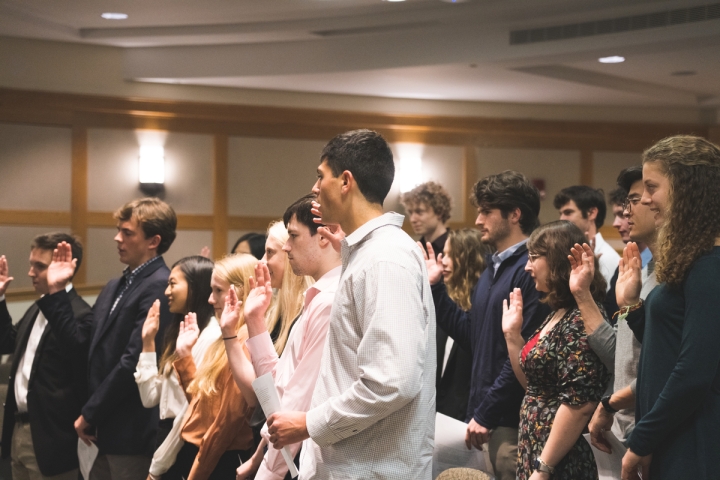 The nation’s oldest honor society sets a high bar: to be accepted, students must achieve grade point averages that fall within the top 20 in their class after completing eight terms within three years of matriculation.

Following a call to order by chapter President Andrew Samwick, the Sandra L. and Arthur L. Irving Professor of Economics, the candidates for membership filed into the auditorium.

“Before beginning, allow me to note that the Dartmouth chapter, Alpha of New Hampshire, is the fourth oldest chapter in Phi Beta Kappa,” said Samwick. “Consequently, the language and the ritual may strike you as a bit archaic. Of the three principles—fraternity, morality, and literature—it might be useful to know that ‘literature’ was used in the 18th century to mean ‘knowledge,’ and ‘fraternity’ was regarded as companionship in the pursuit of knowledge.”

Samwick next asked chapter Vice President John Carey, the John Wentworth Professor in the Social Sciences, to read a passage about the founding of Phi Beta Kappa in 1776 by a group of students from the College of William and Mary in Virginia.

“During those turbulent times of the Revolutionary War, they envisioned Phi Beta Kappa as a secret society that would give its members the freedom to discuss any topic they chose. Ever since, freedom of inquiry and expression have served as hallmarks of Phi Beta Kappa, though, starting in the 1830s, the requirement of secrecy ended,” Carey said.

After affirming loyalty, including a vow to “prove true, just, and deeply attached to this, our growing society,” the new members were formally inducted. Following a round of applause, they walked to the officiants’ table, recited their names, signed a register, and picked up certificates (hand-lettered by Kate Soule, the chapter secretary and director of Arts and Sciences finance and research administration) and handbooks.

Samwick also bestowed an award on sophomores “who have the highest academic rank at the conclusion of five terms of enrollment at Dartmouth, completed not later than June of the second calendar year following matriculation.”

I think this is a testament to the hard work we have all done, and I’m sure I will be excited to find other Phi Beta Kappas out there in the world, when I meet them in a new city.

The new Phi Beta Kappa members, who are all members of the Class of 2023, are:

The sophomore award recipients are:

Closing the ceremony by demonstrating the society’s secret handshake, Soule reminded the audience that Phi Beta Kappa maintains a website displaying news about chapters and events all over the world.

Lining up for the group photo, which Soule asked members to share on social media platforms, Hannah Spindler ’23, who majors in biology and French, said she plans be an active member.

“I think this is a testament to the hard work we have all done, and I’m sure I will be excited to find other Phi Beta Kappas out there in the world, when I meet them in a new city,” she said. “I would love to join one of the book clubs or other organizations. It’s just a great way to connect with people.” 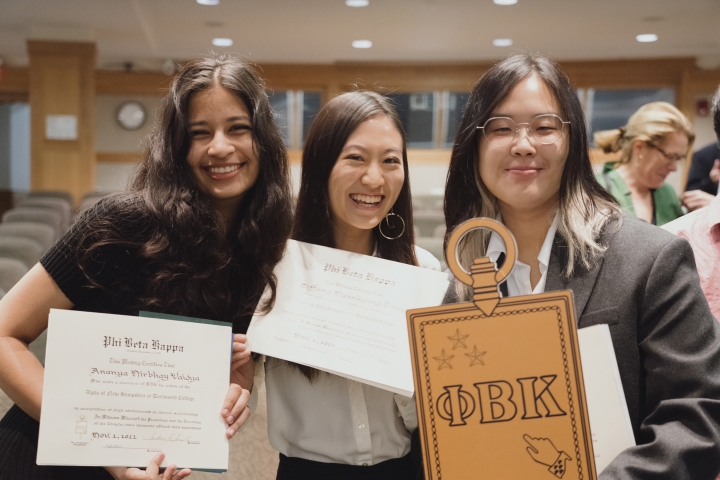