Community marks the day with events around campus.

Students, faculty, staff, and alumni celebrated Veterans Day on Friday with a flag raising on the Green, a veterans breakfast, and a group run honoring President Emeritus James Wright, a Marine Corps veteran who died last month at 83.

Susan DeBevoise Wright and her grandson Patrick Wright ’23 were on hand on the Green for the flag raising and the dedication of the five-mile run at sunrise.

The event was organized by Jason Mosel, a network engineer for Information Technology and Consulting and coordinator of the Dartmouth Veterans Employee Resource Network. The dawn ceremony followed a 50-mile run by Mosel that started at Moosilauke at 3 a.m. and finished on the Green at 8 p.m. Thursday. He had planned to make a 100-mile run, but cut it off Thursday night and returned at 6 a.m. for the flag raising.

Susan Wright thanked Mosel, a Marine Corps veteran, for his service and for remembering her husband on Veterans Day.

“This is such an honor. Jim would be so pleased by this. He was interested in supporting veterans at Dartmouth to the very end,” Susan Wright told Mosel before he headed out on the five-mile loop with a pack of about a dozen other runners.

Patrick Wright also conveyed his gratitude to the assembled veterans and to Mosel for honoring his grandfather.

“I think he was incredibly proud of all the veterans at Dartmouth,” Patrick Wright said. “I remember when he stepped down as president, we had so many conversations about his work encouraging vets to continue their education, and he was so proud of each new class of veterans coming in.” 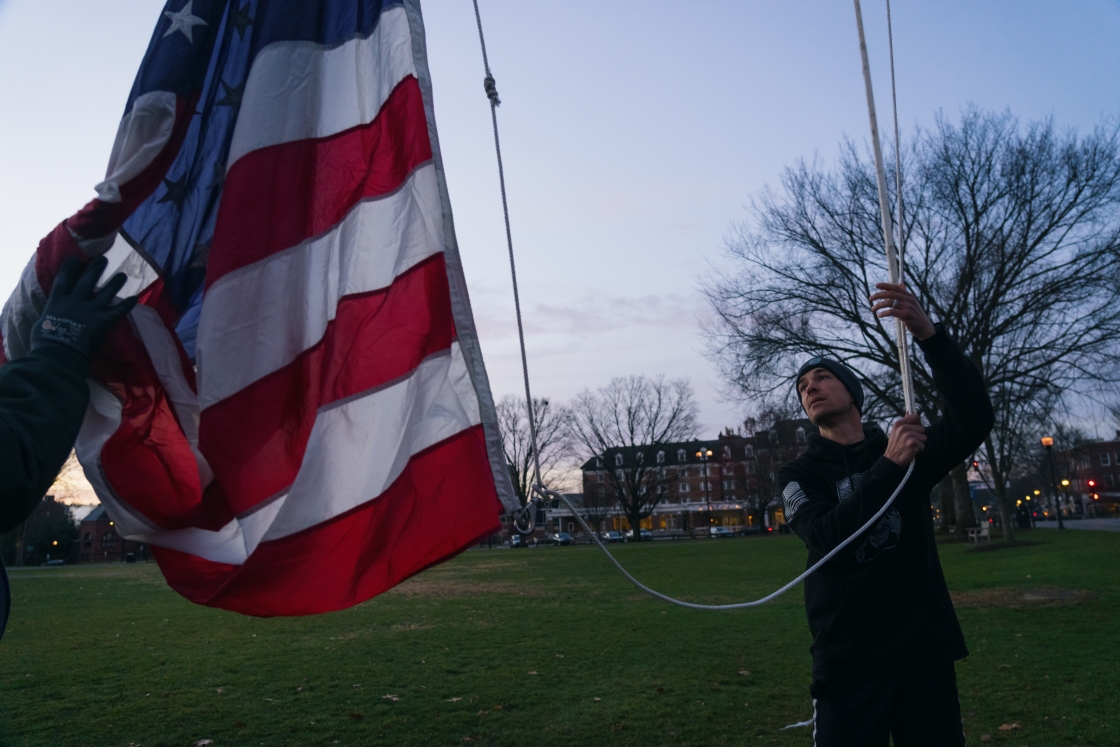 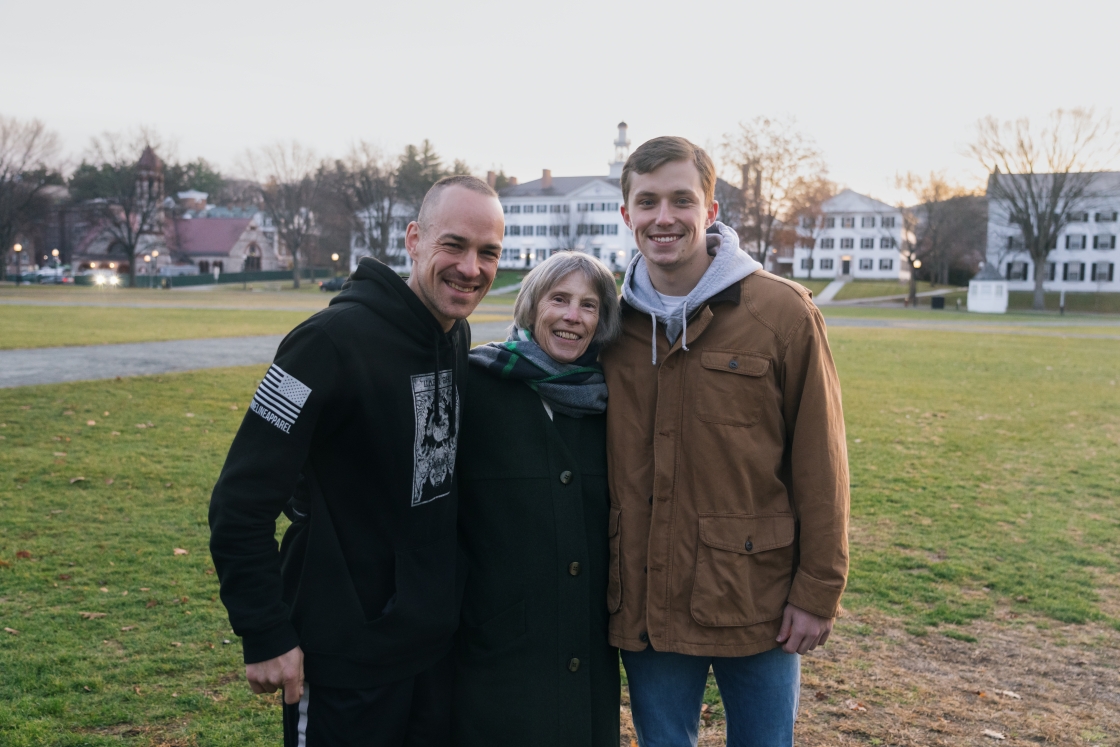 Susan DeBevoise Wright and her grandson Patrick Wright ’23, right, were present for the start of the ceremonial run led by Jason Mosel. (Photo by Eli Burakian ’00)
Image 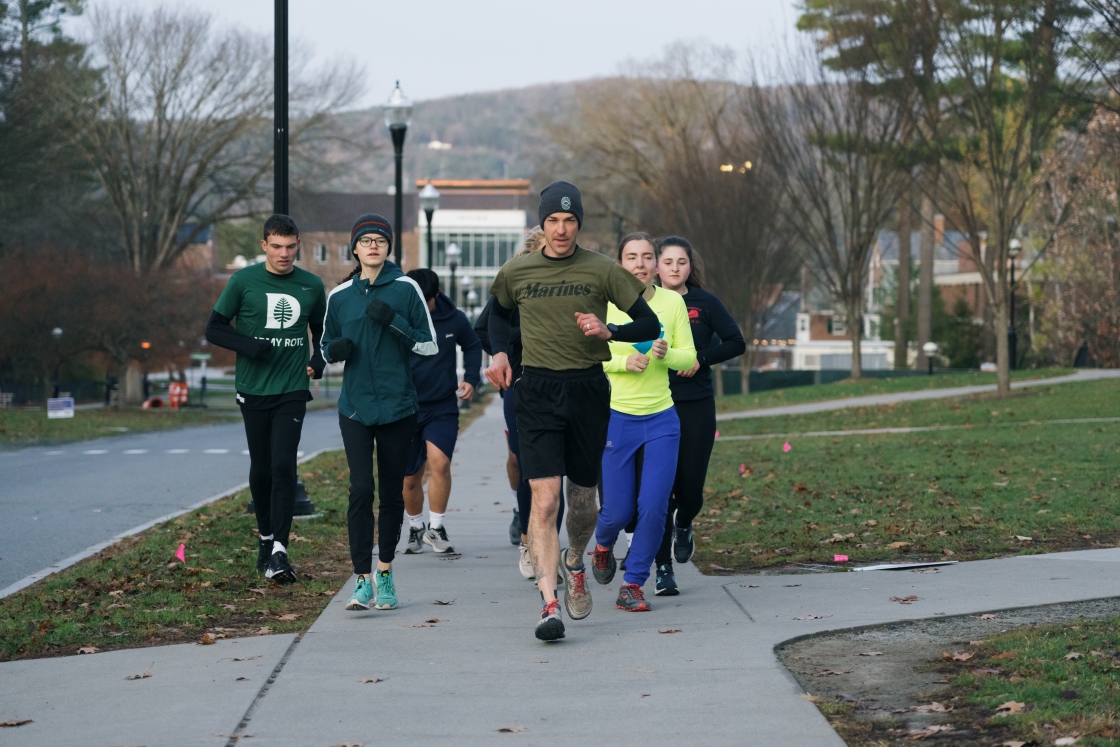 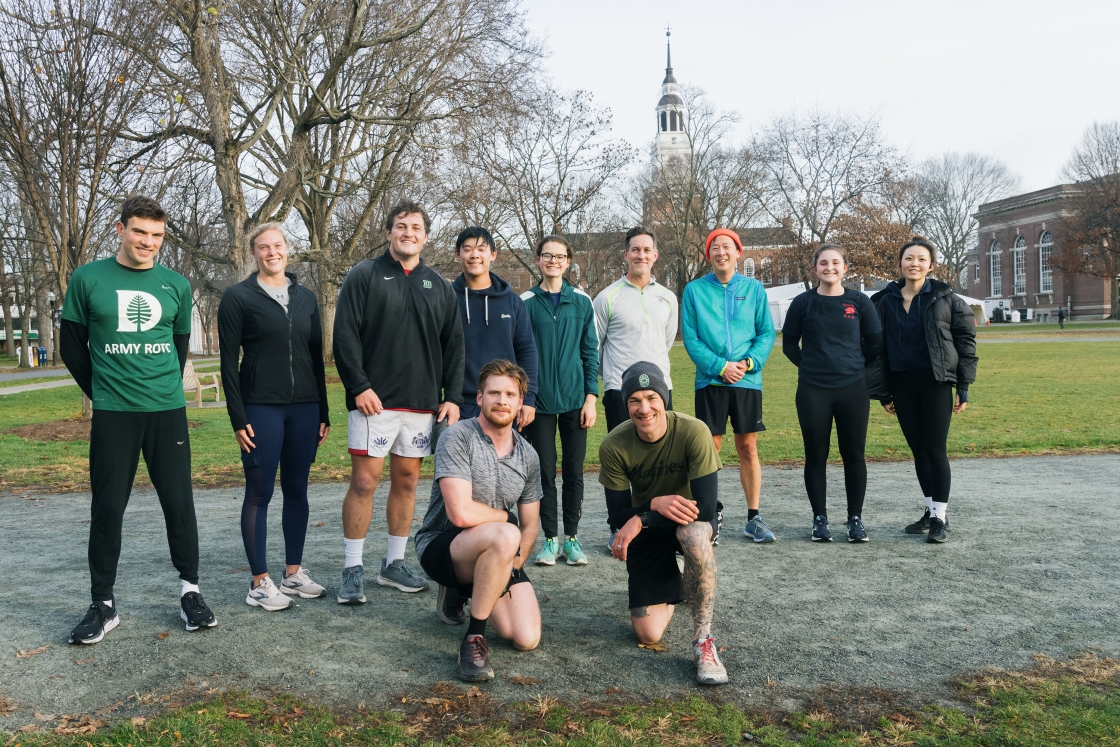 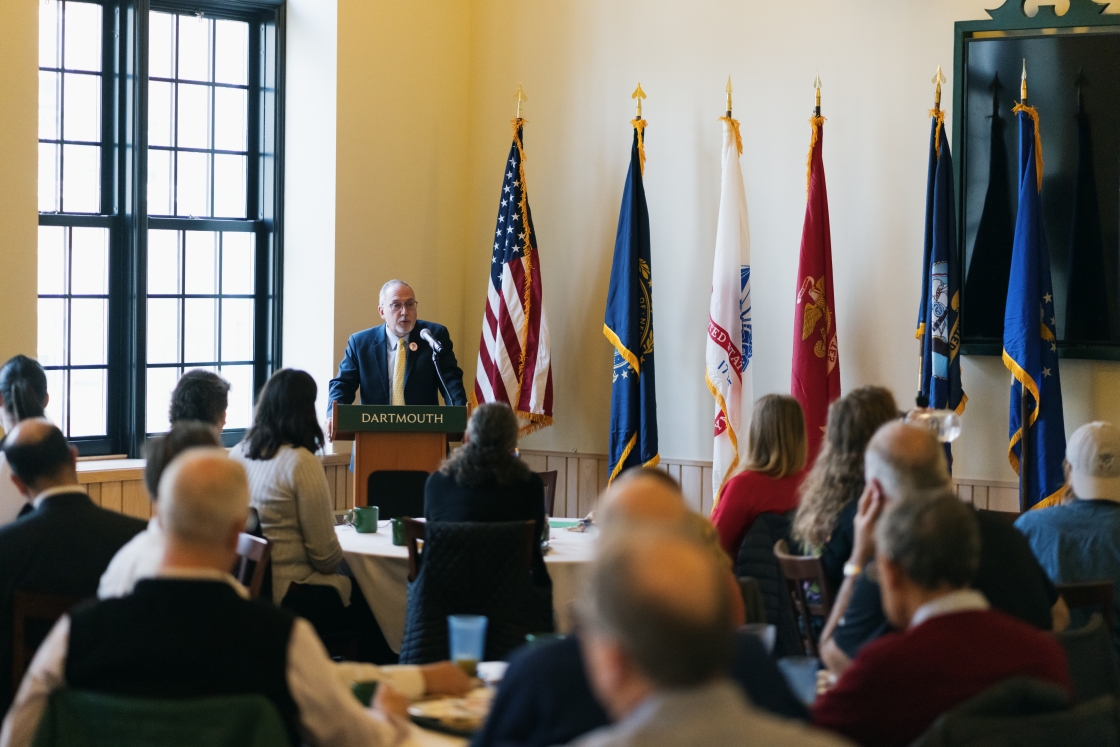 Tim McNamara ’78, a retired Naval Reserve Intelligence Officer, was the keynote speaker at the Veterans Day breakfast. McNamara is the associate director of Facilities, Operations, and Management. (Photo by Eli Burakian ’00)
Image 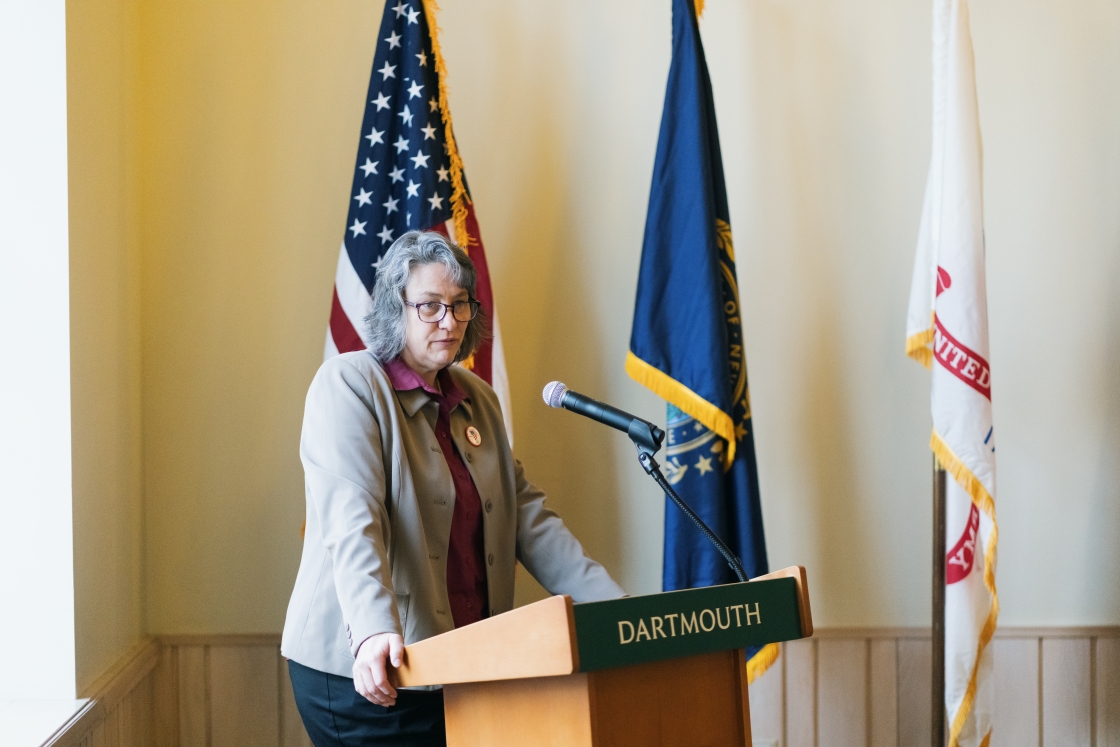 Cheryl Guerin, the executive director of human resources services, served as emcee of the breakfast. (Photo by Eli Burakian ’00)
Image 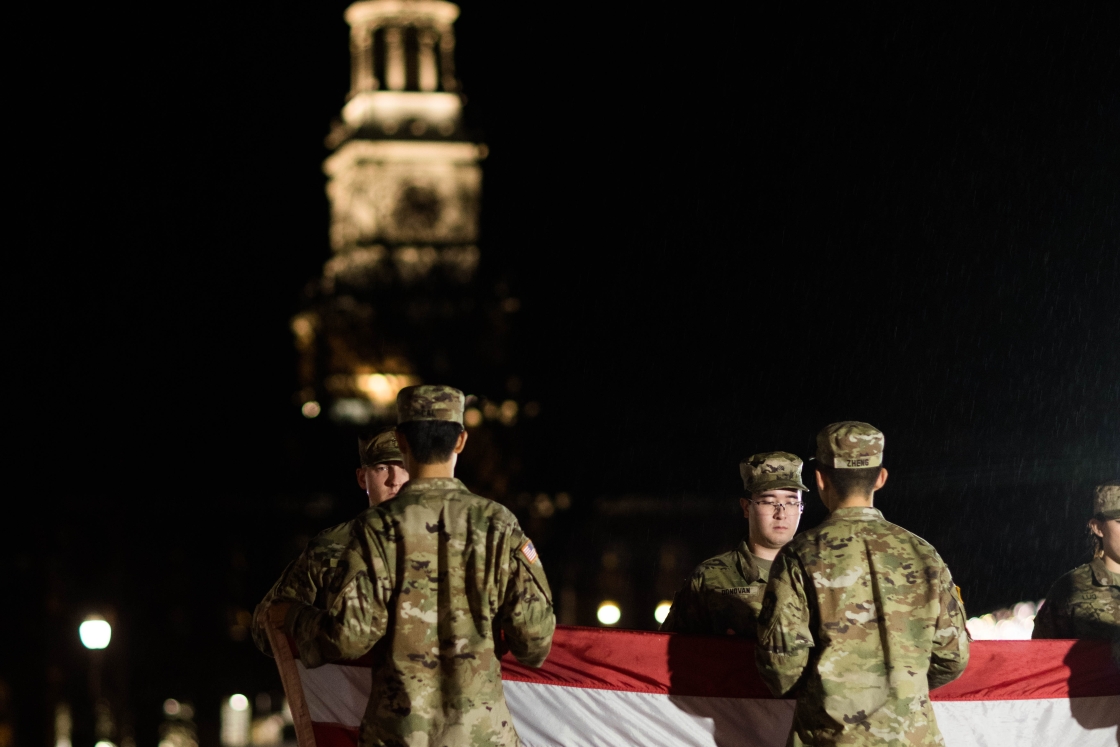 Veterans Day events concluded at sundown Friday with the retreat and drill ceremony conducted by the Dartmouth ROTC at the campus flagpoles on the Green. (Photo by Katherine Lenhart)
Image 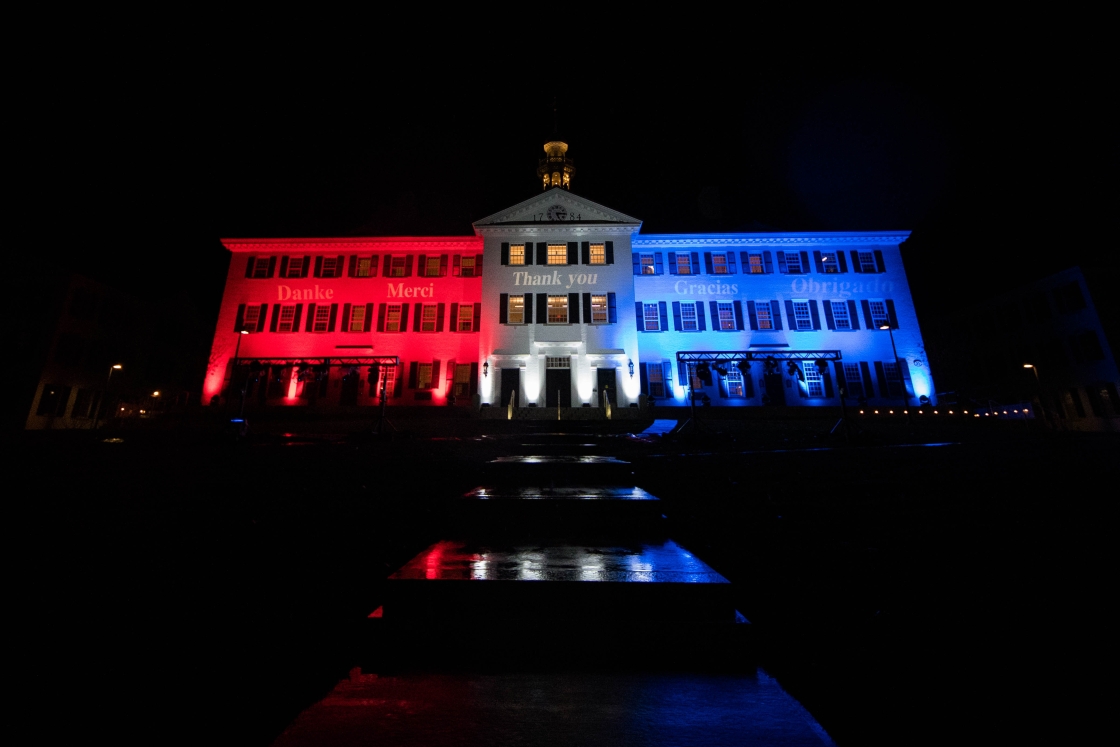 Dartmouth Hall on Friday evening after its rededication ceremony. (Photo by Katherine Lenhart)
In the News