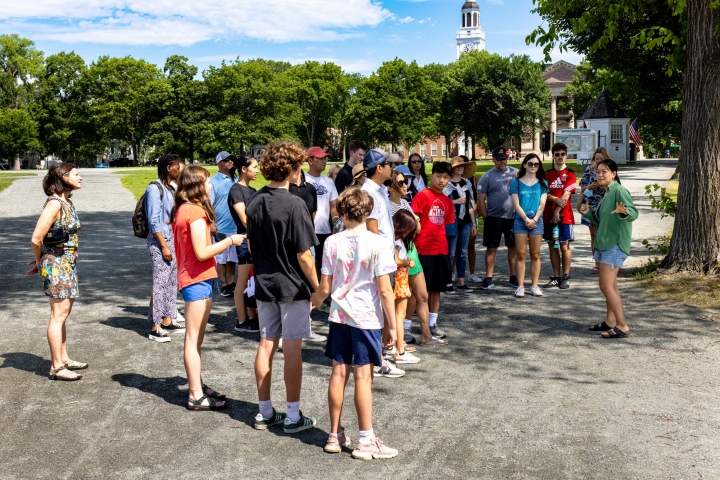 Prospective applicants and family members get a tour of the Dartmouth campus in July. (Photo by Lars Blackmore)
12/16/2022
More Reading

The Office of Admissions this afternoon released its electronic notifications to students who submitted early decision applications to Dartmouth for the Class of 2027.

As the next entering class of undergraduates begins to take shape with this first wave of offers of admission, Lee Coffin, vice provost for enrollment and dean of admissions and financial aid, likens this stage of the application process to the early returns on an election night—when trends and themes begin to emerge.

“The preliminary results are very exciting,” he says, as the Jan. 3 deadline for regular decision applications approaches.

Applicants to the Class of 2027 are the first to do so since Dartmouth announced a series of sweeping enhancements to its financial aid policies last year—including the elimination of required loans in aid packages, as well as the elimination of a required parent contribution for applicants from families with annual family income and typical assets below $65,000 per year. Dartmouth this year also became one of only seven American institutions that offers need-blind admissions and meets 100% of demonstrated need regardless of citizenship.

Preliminary results from the Class of 2027 thus far include an average scholarship award of $63,600, a record high, and over 17% of accepted applicants drawn from low-income households worldwide.

“Over the past year, Dartmouth has made an enormous investment in people, and those new aid resources and policies represent a sea change in support of access to the College,” Coffin says. “What you see in the early returns on the Class of 2027 are an expanding socioeconomic, geographic, racial, and international identity that continues to create an entering class that really represents the 21st century. It’s a multi-dimensional cohort of compelling individuals.”

This year’s admissions cycle is the most robust—in terms of travel to campus by prospective applicants, as well as visits by admissions officers to high schools across the country and around the world—since the onset of the COVID-19 pandemic in early 2020.

The growth in our early applicant pool paired with its clear depth has been remarkable for my admissions colleagues and me to witness.

The 3,009 students who submitted early decision applications represent a 14% increase from last year, the College’s third record pool in the last five early admission cycles. Over the past three years, Dartmouth’s early decision pool has increased by 45%.

“The growth in our early applicant pool paired with its clear depth has been remarkable for my admissions colleagues and me to witness,” Coffin says.

Dartmouth extended acceptances to 578 early decision applicants. Earlier this month, an additional 47 students matched with Dartmouth via QuestBridge, a national access program that introduces high-achieving students from low-income backgrounds to many of the leading institutions of higher education. The match cohort was drawn from a pool of 1,260 candidates.

The initial offers of admission were extended to students from 47 states, as well as Puerto Rico and the Virgin Islands, and from 43 countries in addition to the United States. Of those who are American citizens, 41% are people of color, a record high for the early rounds, and 15% are in the first generation in their families to attend college. Fourteen percent are the children of Dartmouth alumni.

“The sustained growth of our early pool reflects the continued expansion of Dartmouth’s footprint around the world,” Coffin says. “Within that pool, we’re seeing some extraordinarily accomplished students who are strikingly good fits for our academic program and community.”