Untangling the Evolution of Complex Life

Expansion of microRNAs in octopuses suggests a role in advanced brain development. 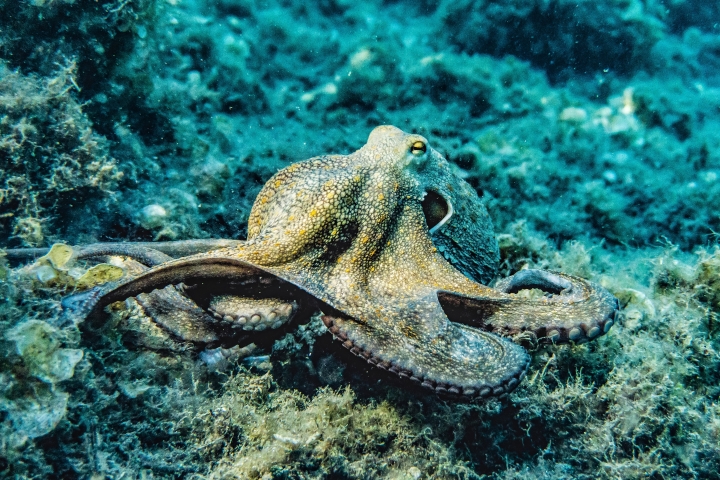 Kevin Peterson: The Evolution of a Paleontologist

Octopuses have captured the attention of scientists and the public with their remarkable intelligence, including the use of tools, engaging in creative play and problem-solving, and even escaping from aquariums. Now, their acuity may provide a critical link in understanding the evolution of complex life and cognition, including the human brain.

An international team led by researchers at Dartmouth and the Max Delbrück Center in Germany report in the journal Science Advances that octopuses are the first known invertebrates—creatures that lack a backbone and constitute roughly 95% of animal species—to contain a high number of gene-regulating molecules known as microRNAs.

The genes of two octopus species show an increase in microRNAs—which are linked to the development of advanced cells with specific functions—over evolutionary time that has so far only been found in humans, mammals, and other vertebrates.

MicroRNAs are known as the ‘dark matter’ of the animal genome—they don’t make protein, but they regulate the expression of proteins.

When combined with the known intelligence of octopuses, the findings provide crucial support for the theory that microRNAs are key to the evolution of intelligent life, says co-corresponding author Kevin Peterson, a professor of biological sciences. The nervous systems of octopuses and squids—which both belong to a type of mollusk known as cephalopods—evolved independently of vertebrates. Yet, the prevalence of microRNAs in both octopuses and vertebrates suggest a common role for the molecules in advanced cognition.

“MicroRNAs are known as the ‘dark matter’ of the animal genome—they don’t make protein, but they regulate the expression of proteins,” Peterson says, referring to the hypothetical form of matter thought to constitute most of the universe.

MicroRNAs were first reported in 1993 by Victor Ambros, a professor at Dartmouth from 1992 to 2007 who is now a professor at the University of Massachusetts Medical School. In 2005, Ambros received one of the oldest prizes in basic life sciences research, the Lewis S. Rosenstiel Award for Distinguished Work in Basic Medical Research, for his discovery and subsequent research.

For nearly 15 years, Peterson and his research group have sequenced the genes of various animal species in order to link microRNAs to complex tissue development and brain evolution. For the latest paper, Peterson’s group worked with the lab of co-corresponding author Nikolaus Rajewsky, professor of systems biology at MDC, which had a wealth of RNA data on octopus species, particularly the common octopus (Octopus vulgaris).

Peterson’s research has shown that creatures such as placental mammals whose genes have increased in number and complexity over evolutionary time also exhibit increasing concentrations of microRNAs. On the other hand, organisms such as parasites have lost ancestral genes—and microRNAs—as they have become less complex.

“In order to have new cognitive abilities and behaviors requires new cell types,” Peterson says. “The two places you get this—in placental mammals and cephalopods—is also where we see these microRNA-expressed genes. Animals that don’t seem to have changed very much in the past 500 million years don’t have very many microRNAs.” 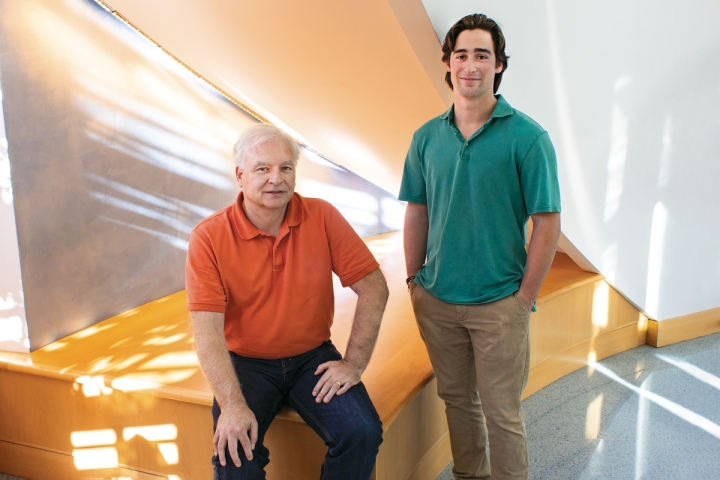 “Every time we’ve tested this hypothesis, we’ve found it very viable, and we’ve not been able to refute it yet. That’s what made this paper particularly exciting,” he says.

For the latest study, Peterson and co-author Peter Chabot ’22 worked through raw data of microRNAs sequenced from octopus species and identified specific sequences that were either new or already found in these animals. Their work provided an organized and annotated data set that was essential to the paper’s findings, says Chabot, who worked for about two years in Peterson’s lab as an undergraduate helping to build and update the lab’s online microRNA database, MirGeneDB.

“I specifically remember finding a new microRNA and realizing how incredible it was to be the first person to see this biological molecule in writing,” Chabot says. “This work led to my thesis in neuroscience where I built on my study of microRNAs to research how to use the presence of these molecules in human blood to detect glioblastoma (terminal brain cancer) growth in patients. Without my foundational experiences with Professor Peterson, I would have never been able to complete my daunting thesis and succeed in discovering methods that can potentially help patients.”

Octopuses possess an uncommon intelligence. In 2016, an octopus named Inky made international headlines after escaping from the National Aquarium of New Zealand by slipping through a gap in his tank and pulling himself several feet across the floor to a nearly 150-foot drainpipe leading to the sea—and his freedom. Octopuses also have been observed collecting and building shelters from discarded coconut shells, and using water currents to play catch with various objects.

This kind of intelligence potentially stems from microRNAs’ role in diversifying cell function, said study co-author Bastian Fromm, a research group leader at the University of Tromsø in Norway who collaborates with the Peterson lab on its microRNA research and in building the online database.

“MicroRNAs are like light switches or dimmers that can turn on and regulate the expression of thousands of proteins in a cell and specify what the cell can do,” Fromm said. “This is a numbers game. Oysters and slugs have microRNAs, but in cephalopods—and especially the octopus—there is an explosion of them that correlates with their intelligence.”