The chapel, which closed during the pandemic, will reopen later this month. 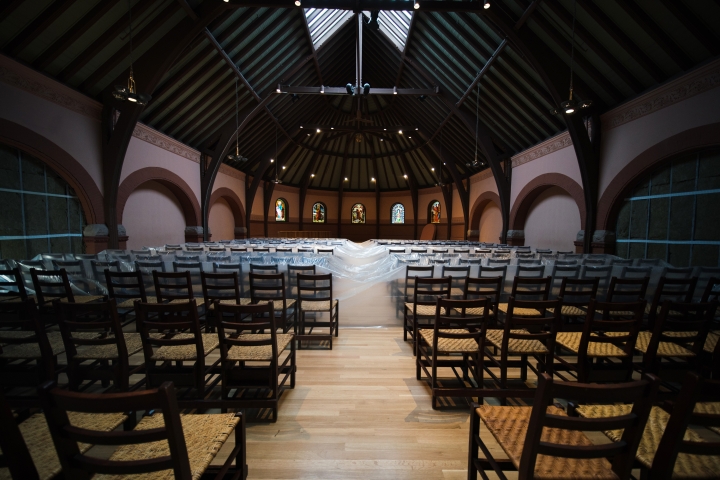 Guided tours and a spirited student-led ceremony will mark the rededication of Rollins Chapel on Jan. 26. The multifaith chapel, which closed during the COVID-19 pandemic, will reopen later this month following renovations that included the installation of a ventilation system and other improvements.

“With the chapel reopening, we will once again have a place where the community can gather in times of celebration and grief,” says the Rev. Nancy Vogele ’85, College chaplain and director of the William Jewett Tucker Center for Spiritual and Ethical Living. “I cannot overemphasize how important that is.”

Tours will be available between noon and 4 p.m. on Jan. 26. A ceremony featuring readings, prayer offerings representing various religious and secular worldviews, and musical selections by students, including the Dartmouth College Gospel Choir, is set for 5 p.m.

Vogele describes the 138-year-old chapel, which is in the heart of campus, as a quiet place to reflect, meditate, pray, or walk the labyrinth, which will be reinstalled later this month.

It’s home to the Hindu temple, which was temporarily relocated to Sudikoff Hall during the closure. The chapel is also the setting for annual events such as the Baccalaureate service, as well as alumni weddings and memorial services. 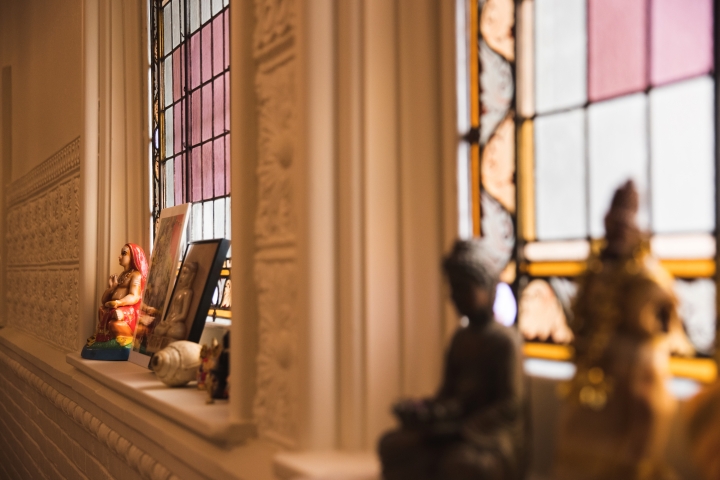 Rollins Chapel is home to a Hindu temple. (Photo by Katie Lenhart)

And with seating for 600 people, it serves as a venue for Hopkins Center for the Arts performances that align with a chapel setting. That partnership with Tucker will expand during the renovation and expansion project now underway at the Hop, Vogele says.

Upcoming shows at Rollins include the a capella group Kings Return, which is part of the Martin Luther King Jr. Day celebrations, on Feb. 1, and other performances appropriate for the space, Vogele says. “It’s great to be able to partner with the Hop around these events.”

The history of Rollins Chapel extends back to the 1880s. At the time of its dedication, in 1885, the chapel’s floor plan mirrored the shape of a Greek cross. Over the decades, the distinctive pink granite building with red sandstone trim has undergone periodic expansions and renovations. Most recently, in 1986, the interior was repainted and otherwise improved, as part of Rollins’ centennial anniversary commemorations. But in 2020, under COVID-19 precautions, the building closed, due to its lack of a mechanical ventilation system or windows that open.

Last June marked the start of the project that would enable the chapel’s reopening. In addition to the installation of a new ventilation system, the work involved converting the heating system from steam to hot water, which is much more energy efficient.

“It was the most logical time to do the entire conversion of the building” and address several maintenance issues, says Todd Thompson, the project manager from Facilities, Operations, and Management.

Vogele says she’s looking forward to celebrating the reopening with the community.

Because Rollins has been closed for nearly three years, “most of the students have never been inside.” 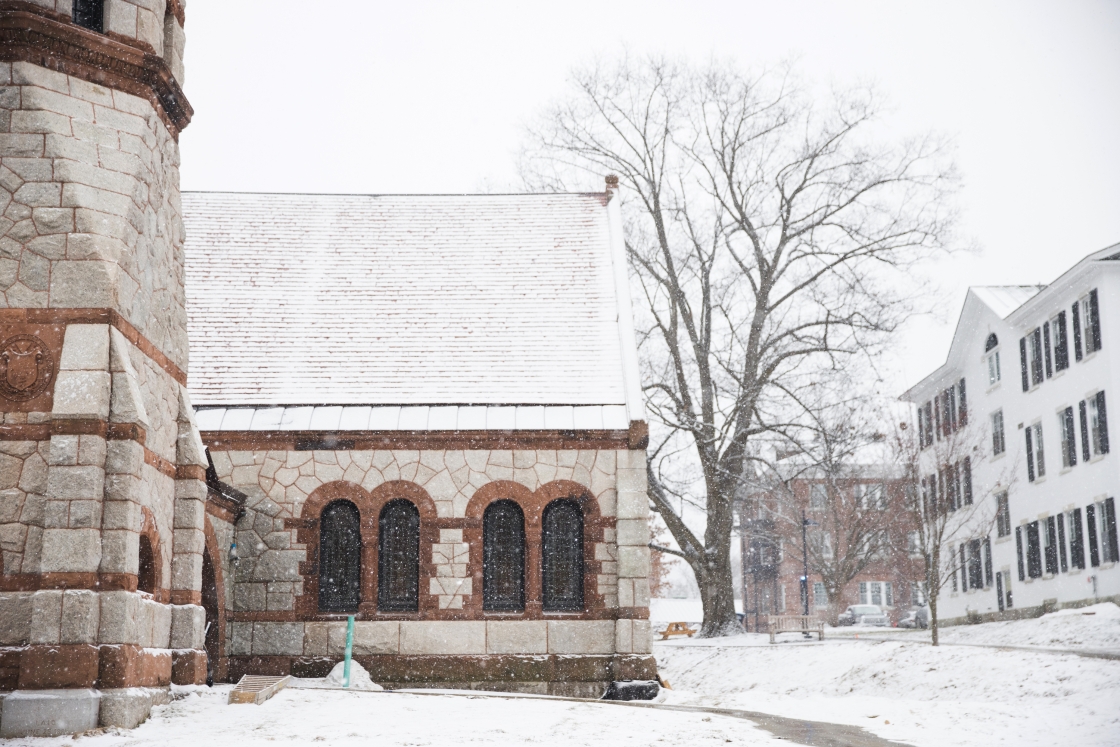 Caption
Rollins Chapel, which dates to 1885, is a place to reflect or pray and also hosts community events. (Photo by Katie Lenhart)
Image 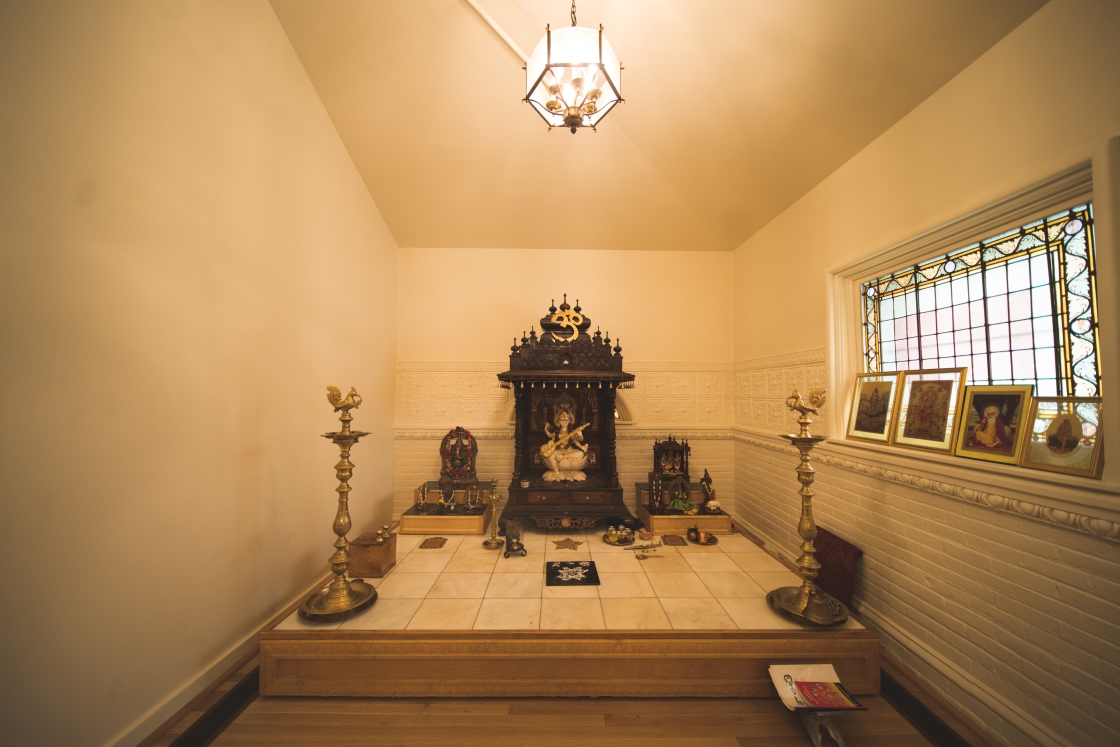 Caption
The Hindu temple in Rollins Chapel has its own room. (Photo by Katie Lenhart)
Image 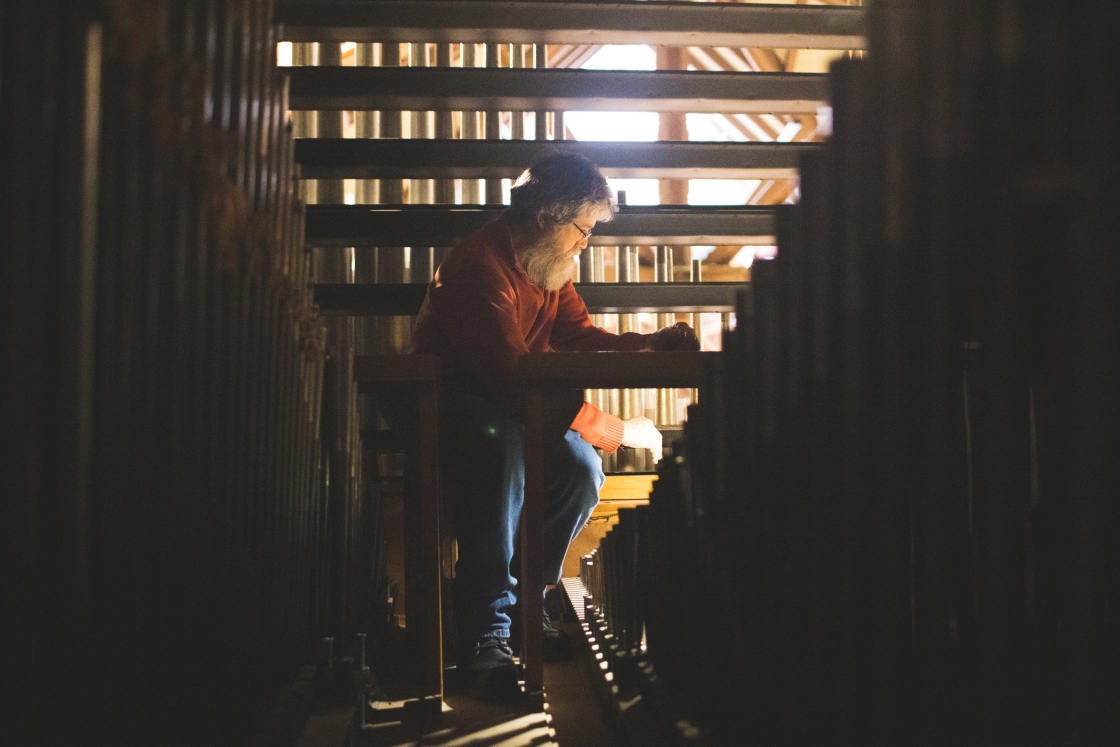 Caption
Gary Smith, tuner and technician at Messrs. Czelusniak et Dugal Inc, tunes the pipes of the Rollins Chapel organ. The Massachusetts-based company has been tuning the organ at Rollins for several decades. (Photo by Katie Lenhart)
Image 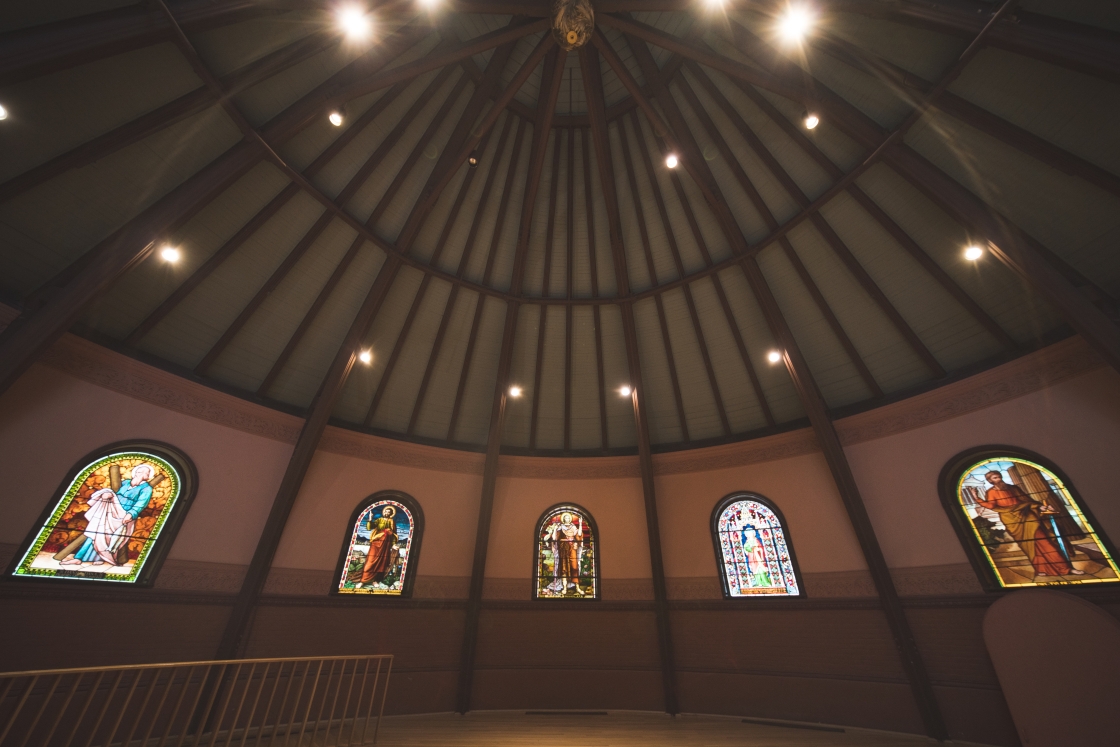 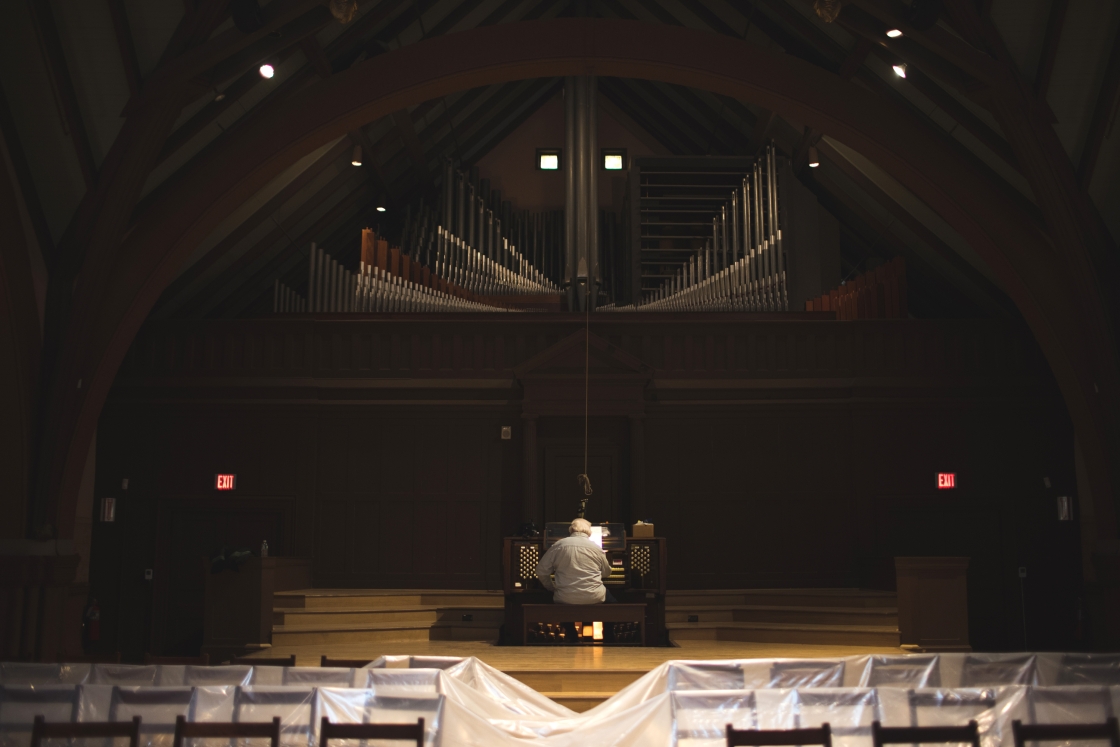 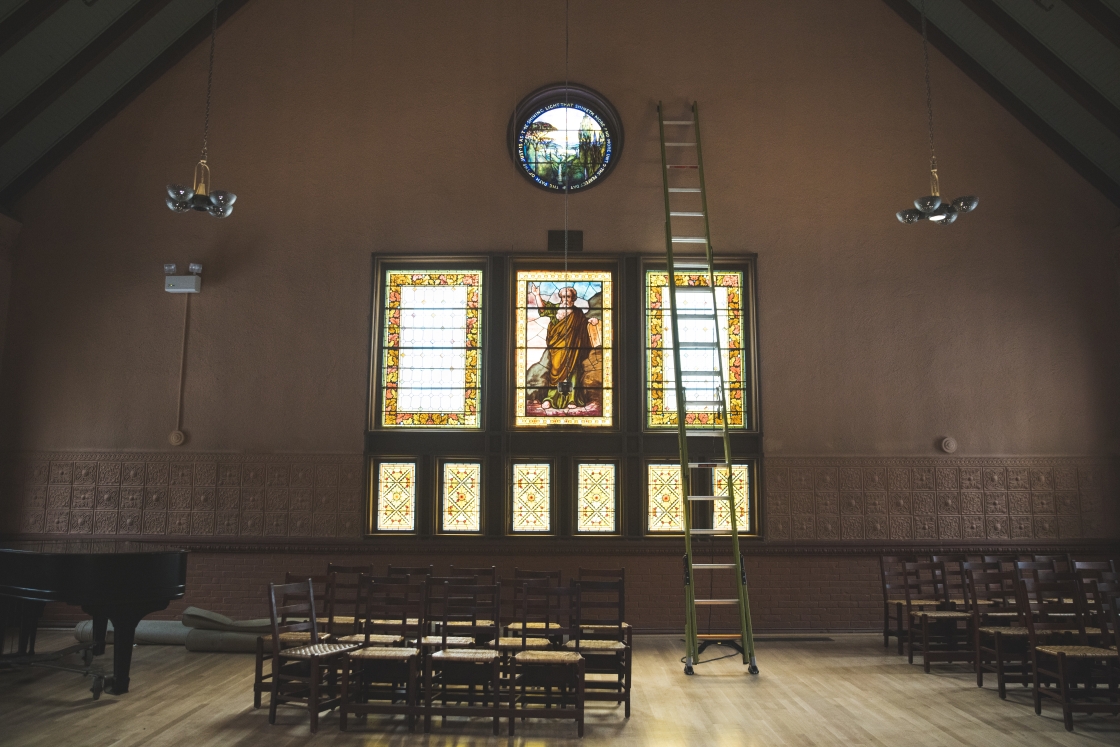 Caption
Some of the stained glass windows in Rollins Chapel. (Photo by Katie Lenhart)
Photos