The ‘me too.’ movement founder keynotes Dartmouth’s 2023 MLK celebration. 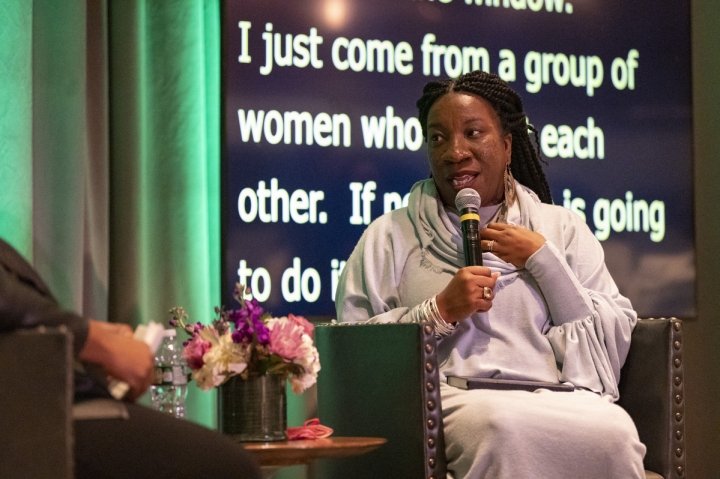 Keynoting Dartmouth’s monthlong celebration of the life and legacy of Martin Luther King Jr., Tarana Burke, the activist and author who founded the ‘me too.’ movement, spoke to more than 100 people in Filene Auditorium Tuesday night about her visionary work to support and empower Black and brown girls and to encourage everyone to speak out about sexual abuse.

“At a really basic level, our stories don’t get told,” she said in the conversation, which was also livestreamed by another 120 people, with Shontay Delalue, senior vice president and senior diversity officer at Dartmouth. “Our stories get cut off, our stories get muted, our stories get stolen. We’re told to swallow our stories. And I tell survivors all the time, the most important person you have to tell your story to is yourself.”

If sexual violence happens every 68 seconds in this country, do you have any idea of the millions of people who have had this experience? What do we owe them? I believe that we owe them healing.

Long before #MeToo became a viral hashtag, Burke, herself a survivor of sexual assault, founded Just Be Inc., a nonprofit organization that helps survivors. Now chief vision officer of the ‘me too.’ organization, she is the author of Unbound: My Story of Liberation and the Birth of the Me Too Movement and, with Brené Brown, You Are Your Best Thing: Vulnerability, Shame Resilience, and the Black Experience. In 2017, Burke, who grew up in New York City, was one of the “silence breakers” Time magazine named 2017 Person of the Year.

In his welcoming remarks, President Philip J. Hanlon ’77 reflected on the theme of this year’s celebration, Building a Compassionate Community.

President Hanlon said it was appropriate to reflect on Dr. King’s legacy because he understood that the path toward equity “begins with compassion, even in the face of violence and oppression.”

“As we’ve engaged in the work of building a compassionate community here at Dartmouth, I have watched as the energy and passion on our campus for this work has magnified. It’s work, work that belongs to all of us,” Hanlon said. “And through the efforts of many we’ve made progress, especially in recent years, but there is still so much more to do.”

“We Owe Them Healing”

Burke began by recalling how, at the age of seven, she experienced sexual abuse but was afraid to tell her stepfather for fear he would protect her at all costs—and possibly land in jail. The conversation then moved on to her grassroots advocacy for other survivors.

“When you think about the 12 million people who tweeted #MeToo in 24 hours, what do we owe those people? We talk about prevention a lot. But if sexual violence happens every 68 seconds in this country, do you have any idea of the millions of people who have had this experience? What do we owe them? I believe that we owe them healing,” Burke said.

“The thing that is criminal is that so many of us who have experienced sexual violence have to live and work and worship and learn in the same spaces where we were harmed. And we have to do that while watching people actively not care, actively do nothing about the harm that was caused. How dare we not take action?” 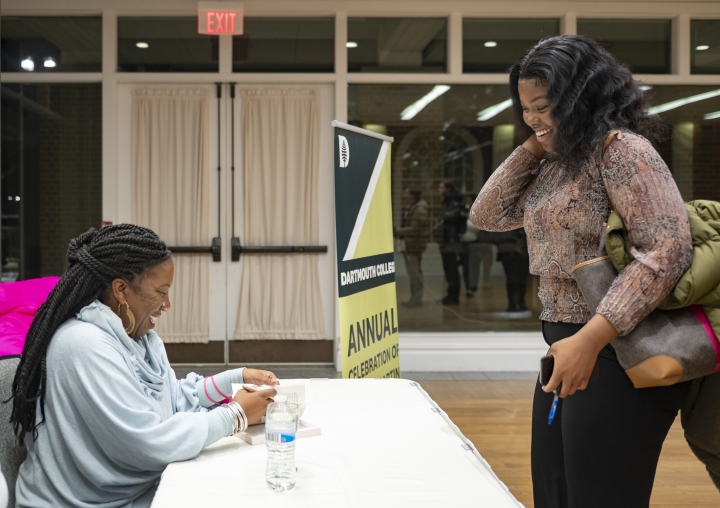 Tarana Burke signs a book for Mikala Uter ’23, who served as emcee of a student event with the ‘me too.’ activist on Tuesday. (Photo by Kata Sasvari)

Earlier in the day, in a Moore Hall classroom, about 30 students listened to Burke answer questions posed by Shaonta’ Allen, a Mellon Faculty Fellow in sociology who is set to become an assistant professor this spring. Afterwards, Mikala Uter ’23, a leadership fellow at the Nelson A. Rockefeller Center for Public Policy, said that she “felt indescribable moments of ‘seen-ness.’ As a Black woman and a survivor myself, it was so illuminating to hear from her, and what was most important about what she said was ‘you cannot give me grace if you cannot see me.’”

Following the keynote, Uter repeated one of Burke’s phrases that resonated with her.

“Radical joy. And I think that’s hard to find because when we say ‘radical,’ people get scared of that word. They think it means extremism or violence or terror, but really it means an internal drive and having an intentional pursuit of that,” Uter said.

Dartmouth’s MLK celebration continues with a performance of Kings Return, an a cappella group with roots in gospel, jazz, R&B, and classical music, performing at 8 p.m. on Feb. 1 in Rollins Chapel.  Also forthcoming on the King celebration events calendar: two films and a dialogue about the experiences of Black students at Dartmouth.